Ex-Arsenal midfielder Paul Merson tells Sky Sports News: "There will be 30 and 40-year-old fans who have grown up with that dinosaur. It's disappointing, I think it's poor by Arsenal, I really do." 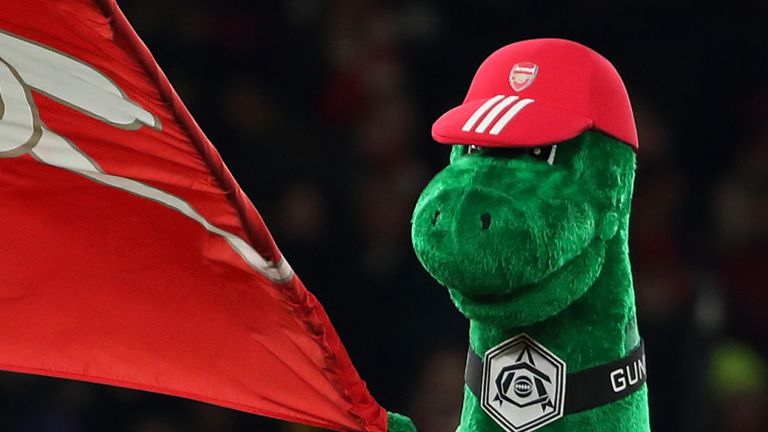 Paul Merson has criticised Arsenal's decision to let go their loyal mascot of 27 years as part of ongoing cost cutting.

A fundraising page has been set up for long-serving Arsenal mascot Gunnersaurus after it was reported he had been released by the club.

Reports have suggested that the club's mascot for the last 27 years has been let go, with his role no longer deemed necessary due to fans still not being able to attend matches.

As a result, a GoFundMe page for Jerry Quy, who has played the much-loved dinosaur mascot since 1993, three years before Arsene Wenger's arrival at the club, has been set up by George Allen.

A statement on the page read: "Gunnersaurus has been the Arsenal club mascot for 27 years. He's a club icon and we cannot let him become extinct.

"Played by lifelong fan Jerry Quy, it would be a terrible shame to lose him. The mascot league is the only one we've consistently been on top of, let's keep our all time top scorer on top.

Several famous Arsenal fans and figures from the world of football have spoken out about the mascot's dismissal at the Emirates, while Spanish club Sevilla even joked on social media that they want to sign the cuddly reptile on Transfer Deadline Day.

Paul Merson expressed his shock at the decision on Sky Sports News, saying: "Unbelievable. All them kids, the Junior Gunners, there will be 30 and 40-year-old fans who have grown up with that dinosaur.

"Its disappointing, I think it's poor by Arsenal, I really do."

And this is how you treat your team mascot 👀🤜🏾😂 pic.twitter.com/CuvR9L3djL

TV presenter Piers Morgan tweeted: "WHAT? This had better not be true. Is it @Arsenal ??!".

He added: "You're going nowhere @Gunnersaurus. I refuse to let @Arsena sack you. Come on @m8arteta @Aubameyang7 - this is not what our club is about."

Gary Lineker said: "Shouldn't be necessary, but it might be a good move and an act of kindness for the @Arsenal players and manager to club together and sort out this absurdity."

Comedian Jack Whitehall joked: "This is so sad. Surely we just keep the costume and put [Mesut] Ozil in it?"

Crystal Palace forward Michy Batshuayi posted a photo after greeting Belgium's mascot as he arrived for international duty, with the caption: "And this is how you treat your team mascot."