Watch Newcastle vs Sheffield United live on Sky Sports Premier League from 1pm on Super Sunday; kick-off is at 2pm Steve Bruce is "desperate" to keep hold of Matty Longstaff and says the midfielder has been offered a "fantastic" deal to stay at Newcastle.

Longstaff, who has been earning just £850 per week on an academy contract at Newcastle, could leave St James' Park after he was offered a lucrative contract by Serie A side Udinese.

The 20-year-old, who has been free to speak to other clubs since January with his current deal due to expire this summer, travelled to Italy for talks just before the coronavirus lockdown.

Longstaff turned down a long-term contract proposal from Newcastle earlier this season, thought to be in the region of £15,000 per week, but the club has now returned with a new offer.

"There's been a lot of talk about Matty and we hope that we can resolve something. There's still dialogue between the respective parties," Newcastle head coach Bruce said.

"Purely from a football point of view we are all desperate for him to stay. He's a young lad, a Newcastle fan and he's had a remarkable rise very, very quickly.

"We have offered him a fantastic deal in my opinion and we hope that he accepts it."

Longstaff out of Sheff Utd match

Longstaff, who burst onto the scene last October by scoring the winner against Manchester United on his Premier League debut, has made 13 appearances in all competitions this season and wants to stay at Newcastle.

Newcastle resume their Premier League season at home to Sheffield United on Super Sunday, live on Sky Sports, but Bruce confirmed Longstaff will not feature due to injury.

"I expect him to play again this season. Unfortunately after the first couple of days he's picked up a thigh injury," Bruce added.

"We expect him to be in and around it in the next three of four days, but we're certainly not going to rush him with a muscle injury like he's got, which is obviously a disappointment to him and to us.

"We hope he's going to be available for some part of maybe next week but certainly this weekend he's not going to be."

It was reported this week that Newcastle have received a new £350m takeover bid from the CEO of US TV company Clear TV - Henry Mauriss - who Sky Sports News has been told would prefer the takeover to happen before the start of next season.

In April, Amanda Staveley's Saudi-backed consortium PCP Capital Partners agreed a £300m deal to buy the club, but that takeover is currently awaiting the outcome of the Premier League Owners' and Directors' Test.

Despite the situation continuing behind the scenes, Bruce says his staff and players cannot allow it to distract them from matters on the pitch. 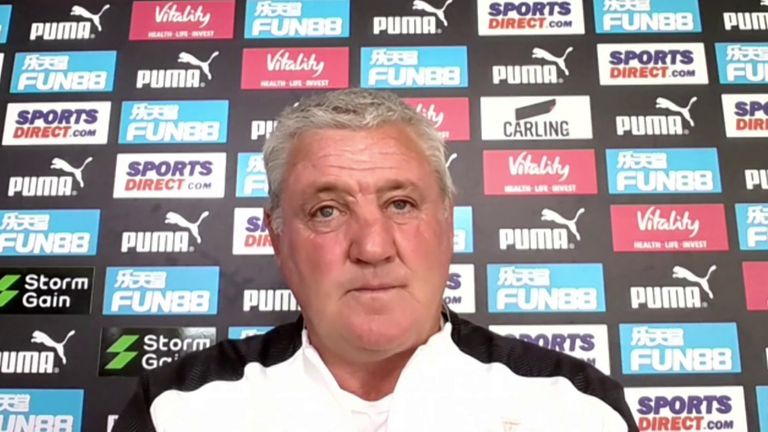 "Any distraction at boardroom level creates a little bit of uncertainty but I think the one thing that we have experienced - well not me personally but a lot of the supporters - is that it seems to have happened so many times so people are becoming a little bit used to it," Bruce said.

"I can't influence what's happening above me. The only thing that I can focus on is making sure that my staff and the preparation of the players is in place to keep our heads down.

"We can't influence anything that's happening at boardroom level. What we can't do is make it an excuse.

"There's obviously something rumbling along, we're all aware of that but let's just focus ourselves on the game on Sunday, the game on Wednesday, the cup tie the following weekend and let's not make it a distraction or an excuse. Let's get stuck into the season and see where we can finish." Sky Sports are broadcasting 64 live Premier League games for the 2019/20 season resumption. In addition to the 39 matches already scheduled to be broadcast exclusively live on Sky Sports before the coronavirus interruption, 25 more matches will be available on both Sky Sports Premier League and Sky's free-to-air Pick channel, allowing the whole nation to be part of the return of live sport.