Ahead of the new season, we look at Newcastle's strengths, weaknesses and what the targets should be for Steve Bruce's side...

Turmoil and tumult have familiarly reigned on Tyneside this summer... but something is in the air.

Steve Bruce, who had the unenviable task of replacing the adored Rafa Benitez, managed to steer Newcastle to comfortable survival in the end - the Magpies finished 10 points ahead of 18th-placed Bournemouth.

Another failed takeover, meaning more dashed dreams of overdue investment and ambition, pointed to a rocky ride once again and yet, on the eve of a new new season, there is a glimmer of fresh, unexpected hope...

Back at square one, where the real issue lies.

Mike Ashley seems set to remain at the helm after a Saudi-backed consortium finally withdrew their £340m bid for the club after an arduous impasse amid disquiet about their links to the Saudi state and alleged piracy.

Anger appeared to have turned, more ominously, to apathy among supporters who simply want regime change at their football club after 13 years of the Sports Direct tycoon.

What transfer business Bruce would be able to do in this window remained to be seen, with Jeff Hendrick's arrival on a free from Burnley their only business until the week before the new term.

But striker Callum Wilson has been signed for £20m and Newcastle's miserable attack - just two league goals for £40m Joelinton last season - has been further boosted by Wilson's former Bournemouth team-mate Ryan Fraser. Both arrived in one bewildering day and promising Norwich full-back Jamal Lewis has joined them for £15m.

A pre-seaon 5-1 thrashing by Middlesbrough - during which Jamal Lascelles was sent off for an off-the-ball incident - followed by another defeat to Stoke had done little for the mood. Nor had injuries to Dwight Gayle and, worryingly, goalkeeper Martin Dubravka, who faces up to two months out with an ankle injury.

But the gloom might just be lifting a little - for now at least.

Bruce's push for a shift in transfer strategy - to British-based, proven Premier League performers identified by the manager himself - seems to have been heeded. In footballing terms at least, Newcastle are grappling towards the light.

That solidity was achieved despite facing 200 shots on target - only Norwich faced more - and Dubravka prevented 8.7 goals, according to Opta xG data.

Where they need to improve 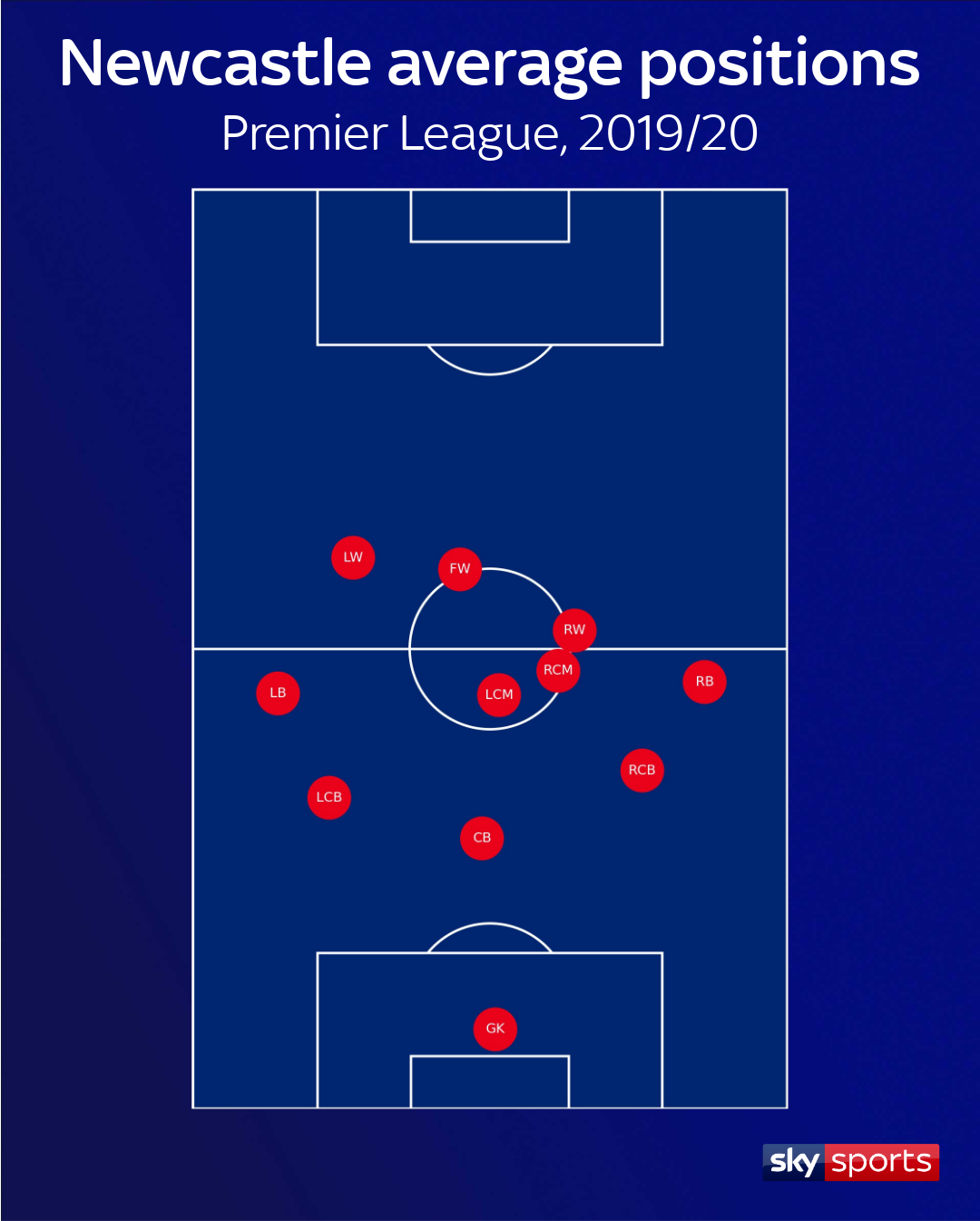 The stats reveal how Newcastle's success at the back also came at a cost at the other end of the pitch, with numerous metrics suggesting Bruce's side sat deeper than any other team in the Premier League last season.

The Magpies produced league-low numbers for passes in the final third and ball recoveries further up the pitch. In addition, their passing sequences also started closer to their own goal than any other team in the league.

Newcastle were surely indebted to Allan Saint-Maximin as well as Dubravka for preserving their Premier League status.

The Frenchman's mazy dribbles frequently elevated monotonous fare and Bruce's side won just once - scoring only nine goals - in 12 games where he did not feature.

There is room for improvement when it comes to his individual output - three goals and four assists - but he was the driving force in an otherwise cautious side; a player who could still stir the most dispirited of supporters.

Wilson, who was swayed to join by Alan Shearer, will carry plenty of hopes on his shoulders of course, too; only Crystal Palace and relegated pair Norwich and Watford scored fewer goals last season.

Matty Longstaff will hope for a big season having finally signed an improved contract, but how brother Sean fares this term and where is an intriguing prospect. A cameo in the No 10 role, flanked by Saint-Maximin and Miguel Almiron, towards the end of last season will have provided food for thought.

After injury setbacks and links to Manchester United that might have temporarily turned his head, can the elder Longstaff stay fit and focused? And can Bruce utilise his attacking qualities more effectively this season?

This is Newcastle, where predictions usually feel futile.

In a recent Newcastle Chronicle poll, 40 per cent predicted relegation and the overwhelming rest a bottom-half scrap. The club might still be in agonising limbo off the field but their signings on it certainly boost their chances of staying away from real trouble.

Success would be regime change, no doubt, but perhaps it boils down to something less tangible.

It was Bobby Robson who asked: "What is a club in any case? ... It's the noise, the passion, the feeling of belonging, the pride in your city. It's a small boy clambering up stadium steps for the very first time, gripping his father's hand, gawping at that hallowed stretch of turf beneath him and, without being able to do a thing about it, falling in love."

How Newcastle fans simply yearn to fall back in love with the black and white again.