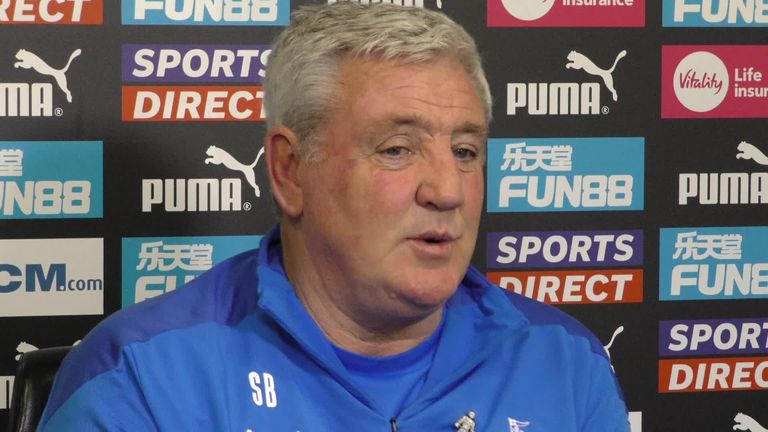 Steve Bruce had some strong words for the agent of Newcastle midfielder Miguel Almiron, who he branded an "amateur looking to make a fast buck".

Almiron's agent Daniel Campos claimed earlier this week that his client would have left Tyneside in the summer if it wasn't for the pandemic and claimed Atletico Madrid and Inter Milan were both interested.

Bruce has been left unimpressed by those comments and says the player has shown no indication he wants to leave the club.

Campos said: "Miguel Almirón was being observed by Atletico Madrid but no offer was made. When everything returns to normal, Miguel will take a leap in quality.

"Miguel's work rate at Newcastle and Paraguay has been great. If it wasn't for the pandemic, he would've been elsewhere. Perhaps he would like to play on a team that has a lot of possession. Maybe in June, he'll make that jump."

Bruce responded on Friday, he said: "His comments were outrageous, bordering on ridiculous. A two-bob agent who is so amateurish…why would you put your client in that situation?

"If it was (Miguel) Almiron knocking on my door then I would listen, but an agent probably trying to profit again after two years is hugely disrespectful to the club. Miguel is a great pro and a great lad but his agent leaves a lot to be desired.

"I will have a conversation with Miggy (Almiron). He is an unbelievable pro. Great attitude and appreciated what the club has given him.

"The agent proves to me he is an amateur looking to make a fast buck again."

Newcastle's top scorer Callum Wilson has declared himself fit for the visit of Chelsea on Saturday lunchtime.

The England international injured his hamstring against Southampton two weeks ago but trained on Thursday and Friday.

Manager Steve Bruce says he won't risk him if there is any threat, but Wilson wants to play.

Ryan Fraser misses Saturday's game at St. James' Park with a hamstring injury he picked up in training two weeks ago.

Matt Ritchie and Jonjo Shelvey are back in training but are unlikely to feature. Shelvey had a hernia operation two weeks ago, while Ritchie injured his shoulder against Spurs two months ago and needed an operation.