Nuno Espirito Santo believes in-form Tottenham have every reason to smile but the Wolves boss will not let his "nice relationship" with Mauricio Pochettino distract him when the two face each other on Saturday.

Tottenham go into the match at Wembley second in the Premier League and full of confidence, having won five league games in a row.

Wolves have also had a good month, winning three of their five matches in December, with the only defeat coming against leaders Liverpool.

Ahead of the game, Pochettino claimed that Wolves are one his favourite teams to watch and revealed that Nuno spent time with him on the Tottenham training ground before taking the job at Molineux.

"Like me, I really enjoy watching Tottenham play," said Nuno. "I am really thankful for that compliment and it shows the work that we have been trying to do, build a team and an identity. 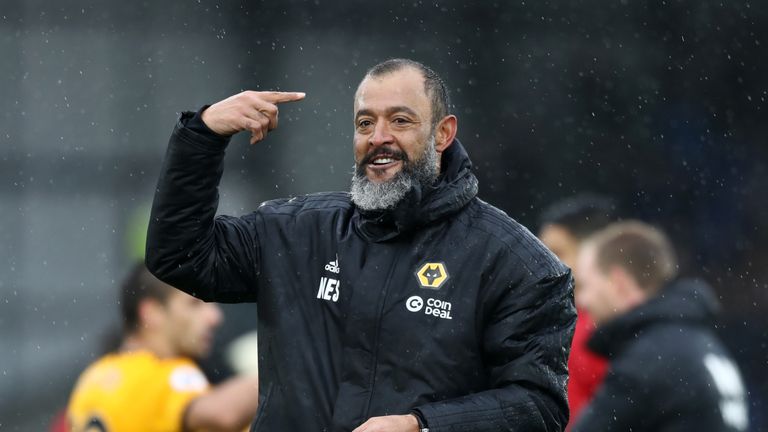 "I am smiling, but this does not mean we are in a good moment. Tomorrow you will not see my smile, I will be focused."

Speaking about his time learning from Pochettino, Nuno added: "It was a fantastic day, I really enjoyed and appreciated it. Since then, we have established a very nice relationship.

"They [Tottenham] are in a very good moment. 11 goals in two matches in a very busy part of the season. That shows the quality of the squad and the management.

"When things go well, you smile, everyone is happy and life is good. Tottenham is in that good moment.

"But the reality of football is that you have to know the good moment doesn't last forever. The faces change, the feelings change and your emotions change.

"I am smiling, but this does not mean we are in a good moment. Tomorrow (Saturday) you will not see my smile, I will be focused."

Asked if Tottenham are genuine title contenders, Nuno replied: "I see that many teams have a chance. It is too early in the season. There are so many games and so many points to be won.

"The table doesn't mean anything for any team at all."