In part 14 of the series, Sky Sports' Voice of Football takes us on a virtual visit to Norwich's Carrow Road with memories of his early trips to the famous old stadium and a charity match featuring David Soul.

Keep an eye out for some Tyler's Teasers on the @SkySportsPL Twitter account. Today's question is all about Norwich's England internationals.

Carrow Road: How I get there

By road. I know this journey so well. I studied at the University of East Anglia and much more recently my daughter Jenny was also a student there.

My first means of transport to Norwich and back was a Vespa 125 scooter. I called it Hercules because it bore some heavy loads!

I followed up with my first car, a Morris Minor, SGW 32. This was a long time before the M11, which eases the trip now. Even more recently the widening of the A11 near Thetford, a project which was first mooted when I was a student, has finally taken place.

When I was in Norwich at university we used to slavishly watch the Sunday afternoon football highlights on Anglia Television. Almost all the camera and commentary positions at the grounds in their region were high above a corner flag, including Carrow Road. It could not have been easy for those pioneers of commentary, one of whom, Gerald Sinstadt, turned 90 earlier this year!

Happily, for a long time now the coverage has been from a more conventional base. A fine view in what the welcome signs to Norwich tell you is a fine city.

Incidentally, nowadays you too can watch the Canaries from above one corner flag, from hotel rooms which overlook the pitch. You do have to have a match ticket though to book one.

The building of Carrow Road took only 82 days! The first work on the site began on June 11 1935, and the first league match was staged there on the following August 31, with almost 30,000 in the brand new stadium.

My most notable memory of Carrow Road

Most of the successful Norwich City games I have covered have been away from home, particularly the remarkable 2-1 triumph in Munich against Bayern in 1993 in the UEFA Cup.

I also commentated on two wins at Anfield, 2-0 in 1983, notable for a Martin O'Neill shot which at the last moment veered into the top corner away from Bruce Grobbelaar, and the famous Jeremy Goss winner in 1994, the final game in front of a standing crowd on the iconic Kop.

I must also add to this the play-off Wembley win which took Norwich back the Premier League under Alex Neil. 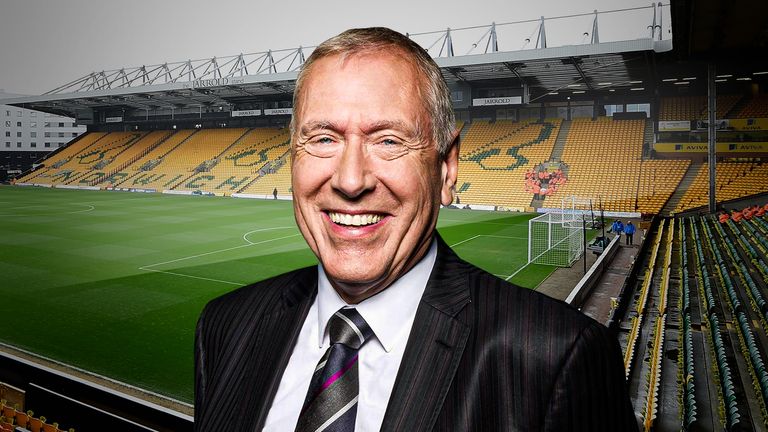 My first means of transport to Norwich and back was a Vespa 125 scooter. I called it Hercules because it bore some heavy loads!

For a real magical day at Carrow Road I have to delve into my personal memory bank. On a Sunday afternoon in May 1982 I played in a match between a David Soul XI and the Dennis Waterman XI, both television superstars at the time. It was the Hutch side of Starsky and Hutch versus Minder. The match programme proclaimed it Charity Gala Football!

Dennis was a decent player with an eye for goal. David, as an American was less familiar with our national game, and restricted himself to performing a ceremonial kick off.

He was a massive attraction in Norfolk that day. As well as the TV series he was a chart-topping singer who sold millions of records. If I remember rightly it was also a promotional vehicle for his tour of the UK.

For me it has a huge sense of familiarity. I spent my first Saturday afternoon living away from home at Carrow Road in September 1964, watching the Canaries' reserves play in the Football Combination. A couple of years later the club helped me get fit again to play for the university, thanks to the first-team physio's treatment of a torn hamstring.

I interviewed the manager at the time, Lol Morgan, for the student newspaper though I had no idea that I would move into the world of media. My last student flat before graduation was in Riverside Road, half a mile from the ground.

That was all a long time ago, but when I was stuck in traffic after leaving the game against Liverpool earlier this year I rediscovered an escape route which worked just as well in 2020 as it had done in the 1960s!

On Thursday: Martin brings us his guide to Sheffield United's Bramall Lane