In an exclusive interview with Sky Sports, Norwich City head coach Daniel Farke talks video analysis, US sports, why he's no dinosaur and how he is still seeing the bigger picture as he explains why he has not given up on a miracle with nine games still to play...

Daniel Farke knows it is unrealistic. That is even the word he uses himself. By his own calculations, Norwich are likely to need five wins from their remaining nine games to stay in the Premier League. That is as many as they have managed to win in the previous 29.

But the 43-year-old German is not interested in realism. He is a football manager and that means his job is to inspire the improbable - starting at home to Southampton on Friday.

"Maybe it is not realistic to stay up but we work in football not just to achieve realistic things," Farke tells Sky Sports. "Otherwise we would work in a tax office or something.

"You have to believe in the unrealistic to do something extraordinary - to create a miracle. That is why we work in this fantastic business and that is what we want to do at Norwich.

"We have already created history and achieved a special success just by winning promotion in the circumstances we were in.

"It would be a huge step to stay in this league. Amazing.

Farke is speaking exclusively to Sky Sports at the end of an 80-minute online press conference in which he has outlined the challenges facing the side currently bottom of the Premier League, a position they have occupied since losing to Aston Villa on Boxing Day.

He begins, as has become customary this season, by listing the injuries.

Grant Hanley, the club captain, is out for the remainder of the season. So too is Christoph Zimmermann, meaning that Norwich resume with just two fit central defenders. Alex Tettey might have to play there.

Farke jokes that star striker Teemu Pukki is an option too.

It says much for his character that after questions from media both national and local, broadcast and written, his demeanour at the end of it all is more upbeat than it had been at the start.

His appetite for the challenge ahead appears undimmed.

"If you want to work as a head coach and to lead a group of people there is no option to feel sorry for yourself or to complain about fate conspiring against you," explains Farke.

"We are not naïve. We know that when so many players are injured throughout the season it does not help you achieving your targets. But we accept the situation and we adapt to the situation. We will go with what we have got and I trust my players.

"In fact, it is a joy to be able to work with them. It is an inexperienced group, perhaps the youngest in the league. But every single training session is a joy because I can see that they are hungry, diligent, focused and willing to work hard.

"They are on a learning curve and we know the players can get better. Once you have had 10 seasons at this level, the next season is not going to be so different. For a young player with only 20 appearances in the Premier League there is an opportunity to improve.

"I hope this will go in our favour."

Norwich came up as champions but the investment last summer was measured with the club refusing to indulge in the sort of spending that would leave them vulnerable. The intention is that the financial rewards of promotion will secure long-term sustainability.

Farke has a close relationship with sporting director Stuart Webber and understands the approach. Indeed, his own plan after retiring as a player had been to take on that role himself. In his first job at SV Lippstadt he oversaw the construction of a new stadium.

As a result, even as a head coach, he prides himself on seeing the bigger picture.

"My experience, albeit at a lower level in Germany, helped me to understand the different perspective of a sporting director or a board member," says Farke.

"There is a responsibility to think strategically about the long-term future of the club. This is what you should do as a head coach too. You cannot always think about the next point.

"We are trying with Stuart Webber to build something at this club and work on the foundations in the medium to long term. That is important.

"I still want to think long term on a strategical basis but I realise how much joy it brings to be a coach and I am fully concentrated on that now. It is more joyful to develop young players than worry about a budget.

"With all my heart and passion I am a coach now." 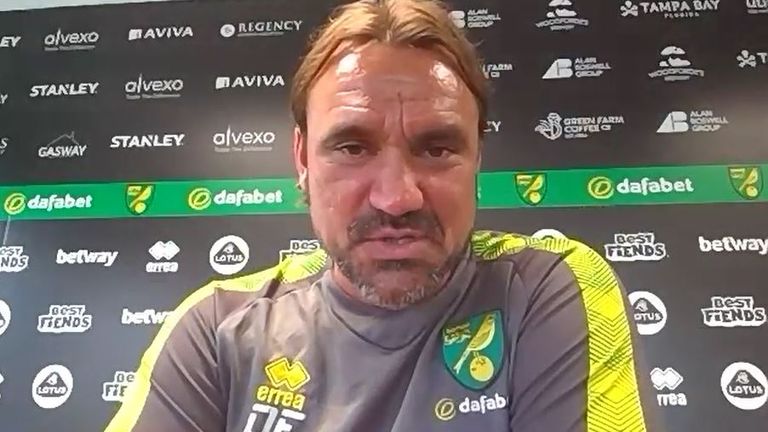 As soon as you think that you know everything about football and don't have to develop you become like a dinosaur. You have to be willing to improve.

All of it was necessary.

"This was the time to look a bit deeper under the surface, working on details that we do not normally have time for. We did not just analyse the last few games. We tried to figure out trends that can help us improve for the future. We have done our homework.

"As soon as you think that you know everything about football and don't have to develop you become like a dinosaur. You have to be willing to improve.

"I have watched so many games to get new input and new influences. I have been thinking about lots of different things. Hopefully, it will help us in the next few weeks."

Does that mean we can expect a new Norwich?

"We will see," says Farke. "That is the advantage that you have after this break - your opponent does not have that much information about you. So we have to use that. We were flexible anyway but we have been speaking about a few different possibilities. It could be a key factor."

He talks of the possibility of playing with two strikers instead of one and also the prospect of going with a diamond formation in midfield. But whatever the tactical tweaks that he decides upon, Farke knows that there are certain ingredients that are essential.

He duly lists them.

Firstly, Norwich must be fit. He believes they are. Secondly, they need to be united. He is confident on that score too.

Finally, they need to have a winning mentality.

Here, he takes heart from two wins less heralded than the one over Manchester City or even the 2-0 victory at Everton. It is the home wins over Bournemouth and Leicester - "the two times that we had the gun to our forehead" - that give him the most hope.

Farke believes that his players are at their best when everything is on the line. He points to the 16-game unbeaten run that sealed promotion last season and those two wins when defeat would have left them facing an insurmountable deficit.

He likens the forthcoming 'nine finals' in which Norwich need to win five games as akin to the sort of series seen in US sport.

"We are playing nine games against nine different opponents rather than against the same opponent but for us it is more or less like a finals series.

"For us, it is difficult for us to win five out of nine at this level but it is still possible. It is still doable. We totally believe that it is possible for us.

"As long as we can fight, we will fight.