The Premier League is back - but what shape are Bournemouth in for the season restart?

Ahead of the Premier League's return this month, we run the rule over Eddie Howe's side, from fixtures and fitness to the manager's view and more...

Analysis: Stronger squad to save Bournemouth?

The Bournemouth treatment room is finally emptying out and that's a huge boost for Eddie Howe as he tries to lead his side away from the relegation zone when the Premier League returns. David Brooks is in line to return, Lloyd Kelly is set for his first taste of Premier League football and Howe has defensive reinforcements to call upon.

"Fingers crossed we will have a stronger squad than when we stopped playing," Howe told The Sun. "Yes, it will be a huge lift and boost for us when we get Brooks back - we've definitely missed him this season. He's a very, very good player and did so well for us last season, building up such good relationships with all the others around him. So far he is looking good and I'm really happy with his progress, fingers crossed he will be OK for the first game.

"But it's not just him. There are other players that could come back into contention. Arnaut Danjuma, Chris Mepham, Lloyd Kelly and Steve Cook are all back in training and they were not available when we stopped. I would like to think by the time we get back to playing, we will be stronger in defence and other areas as well."

Howe will certainly need that stronger squad with Bournemouth, who have had an inconsistent season up until now, set for tricky trips to Wolves, Manchester City and Manchester United in the coming weeks as they look to protect their Premier League status.

Who have they got left to play?

For Bournemouth the run-in looks particularly bleak; they have the highest ranking average opponent (8.2) of any side in the division and play four of the top six, but none of their relegation rivals.

Howe's side face trips to Manchester City, Manchester United, Wolves and Everton, while they face Leicester and Tottenham at the Vitality Stadium.

They also face Crystal Palace, Newcastle and south coast neighbours Southampton in what looks a particularly challenging end to the campaign.

Bournemouth fixtures: Dates and times to be confirmed

Where can they finish?

Bournemouth are currently 18th, hovering inside the bottom three only on goal difference from Watford and West Ham.

The Cherries have a very slim chance of finishing as high as 10th, but that is extremely unlikely, and modelling by Experimental361 suggests they have just a 36 per cent chance survival as Howe - the Premier League's longest-serving manager - seeks to ensure a sixth successive campaign in the English top flight. 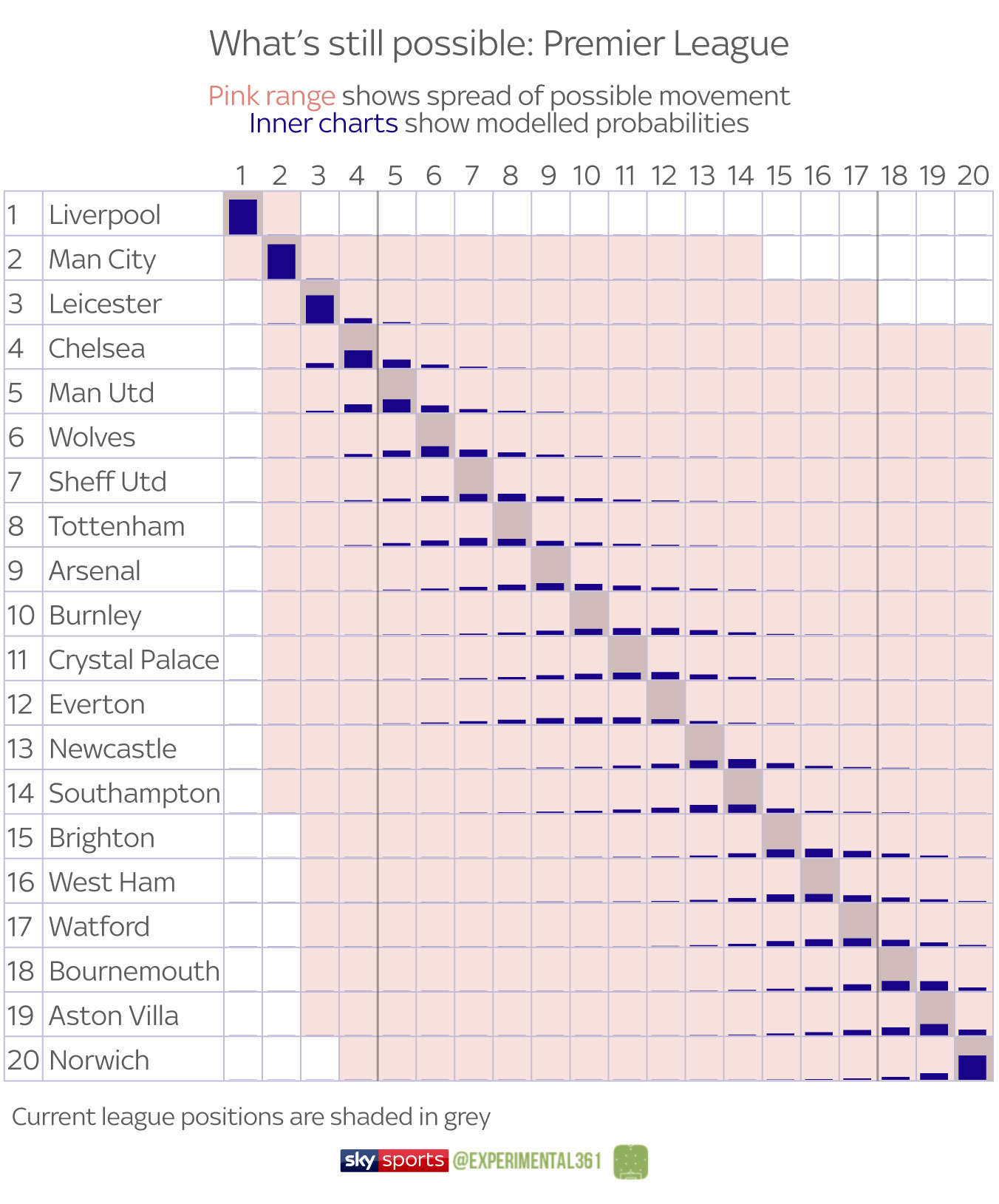 Bournemouth's sole focus is now on the Premier League after exits from both cups. They were beaten 2-0 by League One Burton at the Pirelli Stadium in the third round of the League Cup, while a 2-1 defeat at home to Arsenal ended their FA Cup ambitions for the season at the fourth round stage.

Will anyone be missing? Is everyone fit?

The Bournemouth boss is set to be able to call upon David Brooks, while captain Steve Cook is hoping to return to play some part.

Wales international Brooks has not played since a 3-3 draw with Southampton on April 27 last year, while Cook was expected to miss the end of the season with a hamstring injury sustained in the club's last Premier League game, against Liverpool, before the coronavirus-enforced suspension.

Charlie Daniels, who is yet to return to training following knee surgery, is set to be the only notable absentee when the Premier League restarts.

What form were they in before the break?

Bournemouth were without a win from their last four Premier League games since a 2-1 victory over Aston Villa on February 1.

However, Howe's men put in some promising performances just before the break, holding Chelsea to a 2-2 draw at the Vitality Stadium before showing plenty of spirit in a 2-1 defeat to runaway league leaders Liverpool at Anfield.

The Cherries will be hoping to pick up from those performances when the action gets back under way, leaving behind the inconsistency that has plagued their season.

Bournemouth manager Eddie Howe says the return of the Premier League behind closed doors will not diminish the pressure on players, with his club aiming to avoid relegation.

Asked whether certain players could improve without playing in front of fans, Howe told Sky Sports News: "I am sure for some players, it may make them play better. For some, it may not have that same effect. Who knows until the action starts? But they have all done it before, many times during pre-season, during training, we will have these types of games.

"The difference here is there is so much at stake, but it won't necessarily have that feeling at that moment because there is no crowd, no atmosphere to feed off. It will be a very strange mix of things for the players to handle and to get used to very quickly."

Howe also feels there could be some surprise results when the season resumes as his club seeks to reset after recording one point from their final four games before the league's suspension on March 13.

"I think there will be lots of clubs in the same situation looking at every game trying to maximise the possibilities of getting points and results," he said. "You look at the Bundesliga results and you see the surprise results, a lot of away teams winning. I think potentially that could happen in the Premier League where it doesn't always go with the form book as it was when the season was last played, so [we're] prepared for anything really."

The betting - Will Bournemouth avoid relegation?

Bournemouth are being backed in to be the third team to face the drop to the Sky Bet Championship. Their run-in includes a four-game period where they face Manchester United, Tottenham, Leicester and Manchester City in successive matches. This makes the three before that, fixtures against Crystal Palace, Wolves and Newcastle, absolutely critical if Eddie Howe's side are to stay in the Premier League. With a price of 5/6, you are looking at this one going one way or the other, finely in the balance.

Bournemouth to be relegated - 5/6