Leigh Griffiths, 30, signs one-year extension with Celtic; Griffiths said: "I am delighted to extend my time at the club. Celtic is a club I love and want to do all I can to play my part again in bringing success to our supporters"

Celtic striker Leigh Griffiths has signed a one-year contract extension with the club.

The 30-year-old's contract had technically expired at the end of June, but Celtic confirmed he would be staying on for at least another year on Thursday.

Griffiths has made 261 appearances for Celtic, scoring 123 goals.

"I am delighted to extend my time at the club. Celtic is a club I love and want to do all I can to play my part again in bringing success to our supporters," Griffiths said.

"I'm looking forward to the season ahead and working with the new gaffer and the rest of the lads. It is an exciting time for the club and I wanted to be part of the club's future. I'll be doing everything I can to help us get back to where we all want to be."

The new deal is confirmation that Griffiths will be part of new manager Ange Postecoglou's first-team plans.

Postecoglou added: "I am really pleased to keep Leigh with us for another season at least. I have had very positive conversations with Leigh and he clearly understands my expectations and more importantly the club's.

"Leigh has already proven himself as one of the top strikers in Scotland and I look forward to working with him so that we can bring success to Celtic Football Club." 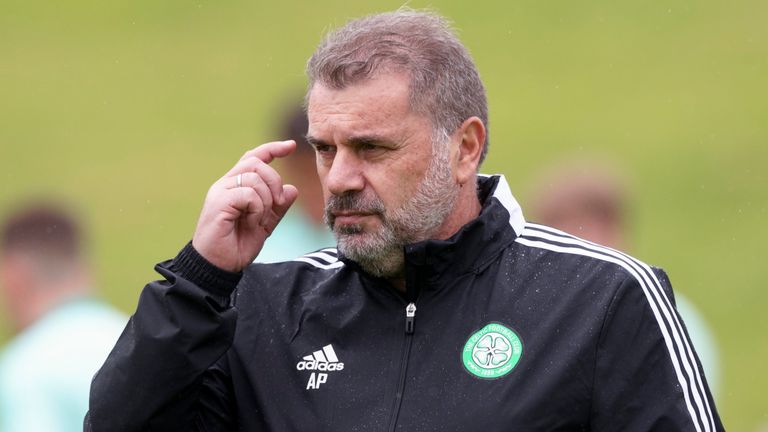 Last week, ex-Celtic boss Neil Lennon fired back in his war of words with Griffiths as he claimed the Celtic striker snubbed the offer of lockdown training sessions.

Lennon was left furious last summer when the Scotland frontman turned up for pre-season out of shape. Things did not improve over the following campaign and Griffiths spent much of the season on the bench.

Griffiths claimed he was "at times" given a raw deal by Lennon and then caretaker boss John Kennedy following the Northern Irishman's February exit.

But those words drew a blunt rebuke when Lennon said Griffiths failed to join his team-mates in taking up the chance to put in extra sessions during last year's Covid-19 shutdown.

"He let himself down," he told BBC Scotland's Euros Breakfast Show. "He's on full pay for the three months of lockdown and he comes back, totally out of condition and a stone overweight, when he couldn't afford to be because he hadn't played much football in the previous 18 months to two years."