Trent Alexander-Arnold was ruled out of Euro 2020 after suffering a thigh injury in the friendly win over Austria; Ben White was among those named in the provisional 33-man squad and has now been selected by Gareth Southgate ahead of England's opener against Croatia on Sunday Liverpool right-back Alexander-Arnold was ruled out of this summer's tournament after he was forced off in the closing stages of last week's 1-0 friendly win over Austria with a thigh injury.

Brighton defender White, who was among those named in the provisional 33-man squad, has now been selected by Gareth Southgate ahead of England's opener against Croatia at Wembley on Sunday.

The 23-year-old, who can play in defence and midfield, made his England debut against Austria and impressed on his first start in Sunday's final warm-up game against Romania.

Sky Sports News has learned White was called on his way home to the south coast at around 9.30pm on Sunday night by England boss Southgate, who told him personally he was being promoted.

The former Newport, Peterborough and Leeds player is said to be "fulfilling a boyhood dream" and is "as happy for his family as he is for himself."

Reacting to the news on Twitter, he said: "Beyond proud and honoured! I'll give it my everything." Highlights from the international friendly between England and Romania

White played 36 times for Brighton in the Premier League during the 2020/21 season and has been rewarded ahead of Jesse Lingard and James Ward-Prowse - both of whom have also shown their quality for England in the past week.

Southgate also had Ben Godfrey, Aaron Ramsdale and Ollie Watkins to choose from, but all five players have now left the camp and returned home. Mason Greenwood was ruled out of the Euros last week with a groin issue.

As per UEFA rules, Southgate is still able to make changes to his squad until Saturday - a day before England's opening game - but it is thought he is not planning to unless there is a significant further injury in training which rules someone out of the tournament.

Southgate still has plenty to ponder before Sunday's match, but this news is a key indicator of his hopes and expectations surrounding Harry Maguire and Jordan Henderson. He believes both players have shown sufficient improvement in recent days to give him confidence they will be able to play some part.

Henderson played 45 minutes against Romania, missing a penalty as he returned to action for the first time since undergoing groin surgery in February.

Maguire is unlikely to be involved against Croatia having only just started running again after injuring his ankle last month. Southgate was also unable to call upon the seven members of his squad who featured in the Champions League final and will run the rule over Ben Chilwell, Reece James, Mason Mount, Kyle Walker, John Stones, Phil Foden and Raheem Sterling in the coming days.

Those players, along with the rest of the 26-man group, have now been given an extra 24-hour break with their families, as Southgate feels one final day of relaxation before the tournament starts is important.

If England reach the final on July 11, they will be in camp for five weeks. They are due back at St George's Park on Tuesday morning when they will again be Covid-tested to re-enter the bio-secure bubble.

"It's huge news for Ben White having only been called up to be part of the standby list in Gareth Southgate's provisional 33-man squad. When that happened, Southgate was very pragmatic in saying to him and others on that list that they were here only really as cover in case there were injuries.

"It turned out that England did get an injury, and it's a pragmatic choice as White covers all those problematic areas for England. Crucially, he played 90 minutes at centre-back in England's 1-0 win over Romania and looked very assured.

"Against Austria, he played 20 minutes in the holding midfield role, and when you consider that England's injury worries now revolve around Harry Maguire at centre-back and Jordan Henderson in holding midfield, you can understand why Ben White fits the bill perfectly."

England have played their final warm-up game ahead of Euro 2020 but who makes your starting XI for the opening match against Croatia on Sunday at Wembley?

Gareth Southgate has named a 26-man squad but has plenty of selection headaches in defence, midfield and attack.

Who would you start in England's opening Euro 2020 game against Croatia?

Make your selections below and let us know who you have chosen in our comments section below, or via social media @SkyFootball.

Southgate: We need to be better

Southgate said England "needed to be better" after ending their Euro 2020 warm-up with an unconvincing 1-0 win over Romania at the Riverside.

England stuttered to victory thanks to Marcus Rashford's second-half penalty but debutant Sam Johnstone was the busier of the two goalkeepers in Middlesbrough, against a Romania side that sit 43rd in the FIFA rankings and have not qualified for the finals. 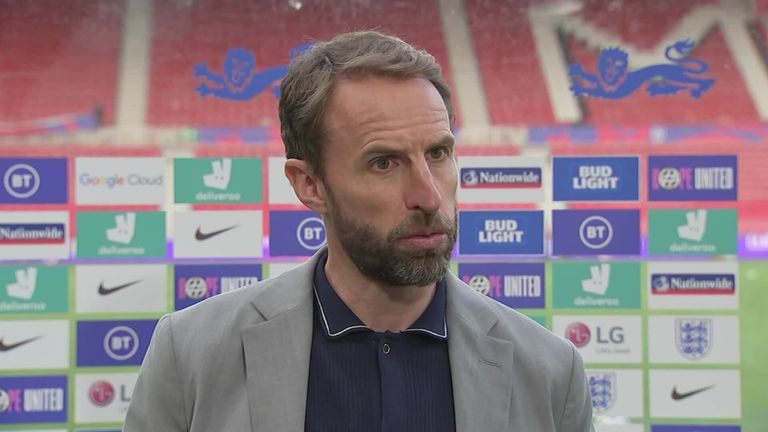 "I don't think we were as good as we want to be, or that we need to be," he told Sky Sports. "In the first half we used the ball reasonably well, our best moments were coming down the left, we needed to get the ball from right to left more urgently.

"We were a bit slow moving the ball, and in the final third we didn't quite select the right pass or ran into traffic when we had a chance to create clearer opportunities.

"We didn't do enough without the ball in the first half, especially our pressing from the front. That meant we were stretched, and we have to learn from that. We'll play against better teams who will carve us apart; Romania created more opportunities than we would have liked, and gave our goalkeeper a nice debut in that he had a bit more to do than we wanted to see."