The England squad will all dye their hair blond if they win the European Championships.

Phil Foden dyed his hair blond before the start of the tournament and he has now convinced his team-mates to do the same if they win a major trophy this summer for the first time in 55 years.

Gareth Southgate has told his players to focus on the positives after Friday's goalless draw with Scotland. In a team meeting, he highlighted previous winners of the Euros who had not made a perfect start. 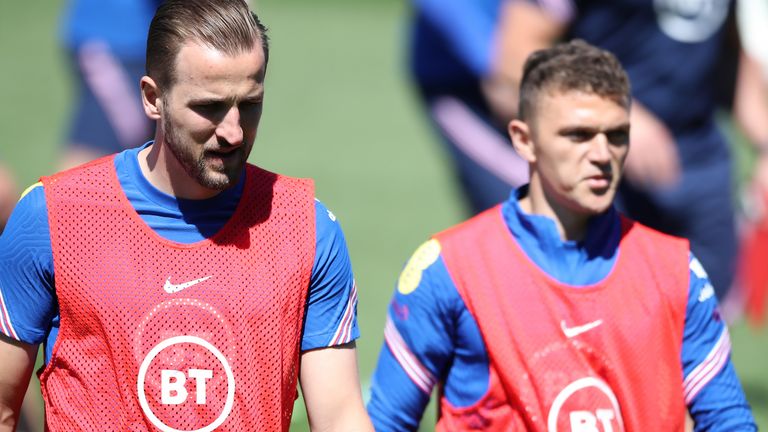 Kieran Trippier has backed England captain Harry Kane to soon get off the mark at this summer's Euros and believes the striker's hard work for the team can go unnoticed.

Portugal won in 2016 after drawing their first three games, Holland won in 1988 after losing their first game and Denmark triumphed in 1992 despite having only registered one point after the first two games.

Southgate believes his players failed to impose their style of play on Scotland and is expecting them to be more dangerous going forward against the Czech Republic.

England were beaten 2-1 by the Czech Republic in October 2019 and they are preparing for another tough physical encounter. Southgate has warned his players that their opponents will be especially dangerous at set pieces at Wembley.

England played in a 4-2-3-1 formation in Prague with Declan Rice and Jordan Henderson as the two holding midfielders and Raheem Sterling, Mason Mount and Jadon Sancho starting behind Harry Kane.

England need to win on Tuesday to finish top of Group D.

Rooney believes Grealish and Sancho will make England more dangerous going forward and Calvert-Lewin will take some of the pressure off of Harry Kane by playing up front with the England captain.

"Calvert-Lewin could make a difference," Rooney said in The Sunday Times.

"He can run channels, occupy the centre-backs, win headers and bring the crossing ability of someone like Reece James into play.

"He can do for England what Olivier Giroud does for France, offering that different option. Kane could play more in the No 10 role he has started occupying for Spurs.

"It will be obvious to everyone that he has not had the best two games but he is England's most natural goalscorer by far, so he has to be on the pitch. He just needs better service and to be more connected to the rest of the team."

Rooney also wants England to play at a higher tempo and for Jordan Pickford to move the ball on quicker from goal kicks.

He said: "Another change we need is for Jordan Pickford to speed his distribution up. He is taking far too long at goal kicks, keeping England's tempo slow and giving the opposition time to get back into shape."