Gareth Bale: Wales will be spurred on by large number of Turkey supporters at Baku's Olympic Stadium

Around 34,000 are expected at Baku's Olympic Stadium on Wednesday, with Turkey able to count on the vast majority of support inside the arena; Azerbaijan's close ties with Turkey means much of the local population will also be supporting Wales' opponents

Gareth Bale says Wales will be spurred on by the large number of Turkey supporters at Baku's Olympic Stadium for their second Euro 2020 Group A game.

Around 34,000 are expected at the venue on Wednesday, with Turkey able to count on the vast majority of support inside the arena.

Thousands of Turkish fans are expected to travel to Baku, while Azerbaijan's close ties with Turkey mean much of the local population will also be supporting Wales' opponents.

"If anything, it kind of spurs us on to be a bit more ruthless on the pitch, and hopefully we can keep them silent."

Bale also welcomed the return to "a bit of normality" with some supporters allowed into stadiums following the easing of Covid-19 restrictions.

The Real Madrid forward said: "Whenever I have played in Turkey before the atmosphere has been incredible.

"It will be nice to have that atmosphere at the stadium and get back to a bit of normality. This is what we do for a living, we are used to playing in away games in front of hostile crowds and it's something we enjoy doing."

Turkey captain Burak Yilmaz faces Wales admitting his side were "broken" by their opening Euro 2020 defeat to Italy.

Senol Gunes' young team were beaten 3-0 in Rome after being tipped by many as dark horses to win the tournament.

"The two days following the game we were very fragile and broken," Lille striker Yilmaz said ahead of Wednesday's Group A clash with Wales in Baku.

"It was a really undesirable start, we had meetings with the coach and he supported us.

"After Wales and Switzerland played, and had a draw, we started to feel better and back to normal.

"We were really tired and negative after the Italy game, but we still cling to the group and have the target and belief [to qualify].

"We weren't expecting that first result, but now we will show who we are and our character. The formula is clear, get the six points and we qualify from this group."

Turkey manager Gunes also described the Wales game as a "final" after admitting disappointment at his side's performance in Rome.

"Italy was a superior team to us and we accepted that superiority," said Gunes, who guided Turkey to third spot at the 2002 World Cup during his first spell in charge of the national team.

"In the group, we are behind all the teams in terms of FIFA rankings, but the one that is closer to us is Wales.

"It is a very good team that showed its quality in 2016 [reaching the semi-finals of the European Championship].

"It has a good philosophy of defence and uses the long ball and wings in a very good way.

"Four points or six points in the next two games will change our course." 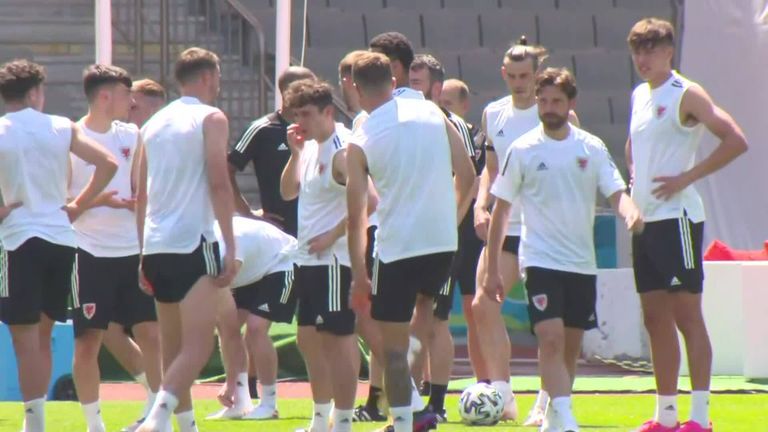 Geraint Hughes reports from the Wales camp in Baku ahead of their next Euro 2020 group match against Turkey on Wednesday (Credit: ©UEFA 2021)

Is it crunch time for Wales already? By that I mean do they have no other alternative than to beat Turkey to progress from Group A? Well yes, probably!

It's the looming final fixture for Wales against Italy in Rome that just looks such a tough ask to get a result from if they are chasing it. Italy are formidable at home, they are even better at picking off teams desperate for a result in their own back yard, so I think Wales must beat Turkey.

How do they do that? It will be incredibly tough and if Wales do manage it, a performance akin to their 3-0 demolition of Russia at Euro 2016 springs to mind. That was almost a perfect performance, it's certainly Aaron Ramsay's view that it was the best Wales have ever played while he has been part of the set-up.