Germany were heading for an early exit from Euro 2020 before Leon Goretzka's late equaliser; Joachim Low's side have won only five of their last 12 competitive games; England host Germany in last-16 clash at Wembley on Tuesday, kick-off 5pm

Joachim Low cast aside concerns about Germany's form ahead of their match against England at Wembley in the last 16 of Euro 2020.

Germany won only one of their three Group F games and were six minutes from elimination before a late Leon Goretzka equaliser kept them in the competition against Hungary in their final game on Wednesday evening.

Euro 2020 will be Low's final competition at the helm of his country after 15 years in charge and while the 61-year-old admitted Germany had to be better when they travel to Wembley on Tuesday, he cast aside criticism about their performances at the tournament so far.

"They are playing at home, they want to attack, it's going to be an open match, more open than it was tonight. We need to improve on things, we are aware of that, and need to take care and be careful, especially at set-pieces.

"We cannot repeat the same mistakes again. We need to do things better here, but ahead of the match against England, we're looking forward to it.

"It's great news to play in London at Wembley against England. The group stage is over and now we have to focus. It's in or out now. Our performance so far hasn't been too good, but if we show what we can, as we did against Portugal for long spells, we can be a strong opponent, and if we don't do that we can get into difficulties." Joshua Kimmich reacts after Germany set up a Euro 2020 last-16 meeting with England, as they twice came back from a goal down to draw 2-2 with Hungary

Low himself was critical of Germany's performance against a Hungary side who looked capable of supplying a seemingly unthinkable outcome as the game entered its final stages, thanks in part to retaking the lead in Munich only 91 seconds after Kai Havertz had first cancelled out Adam Szalai's early opener.

"We committed some mistakes, and gave away too many balls," he said. "This shouldn't happen again in our next match, you will have resistance in this group, that was clear beforehand, this was the group of death - we got second spot and now travel to England.

"We didn't find enough spaces or open up enough spaces in their defence. It was a great mentality at the end, good moral spirit. We didn't give up, we didn't go crazy after falling behind. After scoring the equaliser, the character and personality my team showed was perfect." 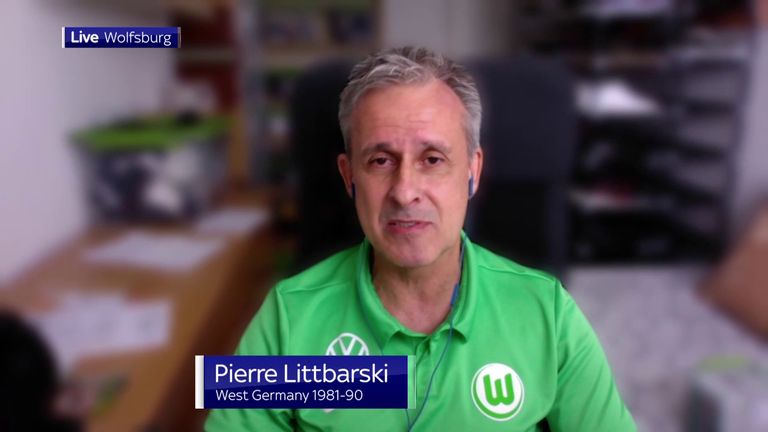 "It's a great rivalry but it's a different game this time. I believe England have an advantage when I look at their starting XI and their bench. Their performances haven't been perfect but they look better than us. They look like they can put another 10-20 per cent on the pitch.

"We're struggling at the moment and we're still struggling to find our best formation. History is on our side, but I feel it will be a very complicated game."

"Everything will be intensified, especially as we are already European champions and world champions in complaining! The supporters have complained about the team and the lousy performances, but now we're playing against England the mood has changed.

"The Germans love playing against England, but on the other hand, you have a talented team that hasn't always produced performances up to their level. It's a 50-50 match."

A beaten but proud Marco Rossi made an emotional tribute to his Hungary players after they exited Euro 2020 as the bottom side in Group F, having avoided defeat against both World Cup winners France and Euro 2016 semi-finalists Germany.

Hungary had at one stage been set to finish second in the so-called 'group of death', and came closer than most had imagined to reaching the last-16 before Goretzka's heartbreaker late on.

He said: "We went very close to a qualification which would have not just been historic, it would have been incredible almost unimaginable. But unfortunately, even in the greatest fairytales, there can be some less than happy endings, and that was the way it went tonight.

"That said, I am very proud of my players. I know from a technical perspective we are not one of the best teams in the world, but from every other perspective, we are. Tactical, how we help each other out, we dig in and show sacrifice, I am very proud to coach this side. We are disappointed, we went very close, but I congratulated all of the team and told them to keep their heads up, because two months from now World Cup qualification resumes.

"I would challenge anyone to say that coming up against these teams to say we could get any points at all. But we got two points; we drew against France and here against Germany. I think these will go down in Hungarian recent footballing history."

The hits and misses of Euro 2020 so far | Most exciting player on show? | The last-16 ties previewed

Peter Smith is joined by Sky Sports football writers Ron Walker and Charlotte Marsh and Sky Sports Data Editor Adam Smith to pick out the teams and players who impressed during the group phase and the ones which have to step out in the knockouts - if they've not already gone home!

The panel also looks ahead to the last-16 ties, the key match-ups which could decide the eventual winner of the tournament, and explain why - with much nervousness and trepidation - England have a good chance of knocking out Germany…