Arsenal fans set off flares and hung banners outside the stadium prior to their 1-0 loss to Everton and have called for owner Stan Kroenke to depart the club following his involvement in the Super League scandal; it follows protests earlier in the week at Stamford Bridge and Elland Road 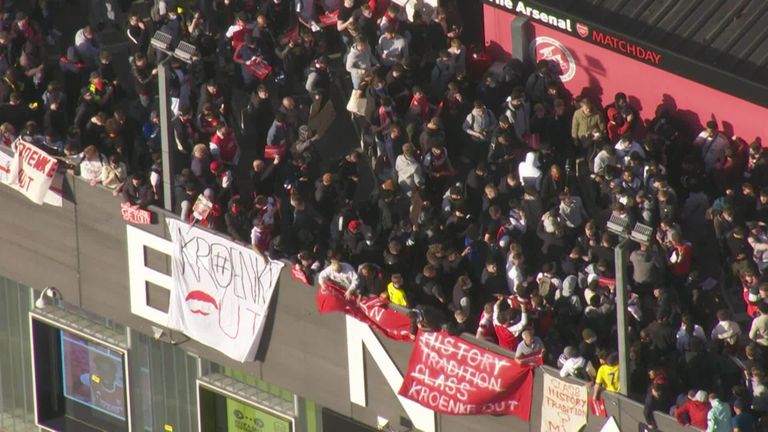 Arsenal supporters protested against owner Stan Kroenke and the club's involvement in the failed European Super League project with a protest outside the Emirates Stadium on Friday before their defeat to Everton.

Thousands of fans could be seen outside the club's ground over two hours before their Premier League game kicked off, with many supporters voicing their intent for owner Kroenke to leave the club and some hanging up banners and setting off flares.

Arsenal and Everton's team buses arrived early at the Emirates to avoid any potential disruption.

Prior to Friday's planned protest, the Arsenal Supporters' Trust warned supporters to abide by social distancing guidelines and adhere to public health coronavirus protocols outside the stadium.

Mikel Arteta brushed off suggestions that the protest had impacted his side's preparations for their match against Everton, telling Sky Sports: "Well we hear it, we know what they [the fans] think but our responsibility should be on trying the best possible way to play the match, and that's it.

"Well, obviously it doesn't help when you have your fans standing out there on a matchday and saying loud and clear to us they're not happy with something. But our job again is to win the football match and when that happens everything is better."

The demonstration follows similar gatherings from fans at Elland Road on Monday night before Leeds' 1-1 draw with Liverpool, and a large number of Chelsea fans who protested outside Stamford Bridge on Tuesday before the Blues' game against Brighton.

A small number of Manchester United fans also broke into the club's Carrington training ground to voice their discontent with the Glazer ownership on Thursday. 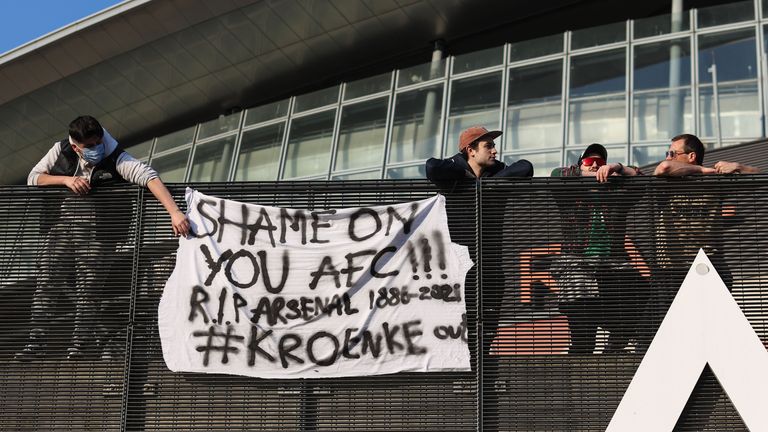 On Sunday, Arsenal, along with Chelsea, Liverpool, Manchester City, Manchester United, and Tottenham confirmed they were joining a breakaway European Super League, but all six English sides decided to pull out of the newly-formed competition on Tuesday night amid almost universal derision towards it from fans, players and managers, and the threats of bans and sanctions from football governing bodies.

Although Arsenal apologised to their supporters in an open letter for their part in the botched breakaway project, conflict between Gunners supporters and the club's hierarchy appears to have intensified.

A number of fans put up banners outside the Emirates Stadium earlier in the week which expressed displeasure towards their decision to join a Super League.

Stan Kroenke - the club's majority shareholder since 2011 who struck a deal to assume full control of the club in 2018 - has faced calls to step down from his role in the wake of the collapsed Super League initiative.

Josh Kroenke, the son of Stan, spoke at an Arsenal fans' forum along with CEO Vinai Venkatesham on Thursday, and has said Stan has "no intention" of selling the club.

"I believe we are fit to carry on in our position as custodians of Arsenal. We were put in a very difficult position by forces outside of the club," he added.

Arsenal manager Mikel Arteta has said Kroenke and Venkatesham have apologised to him and the players personally for the disruption caused by the project.

The Spaniard insists the two senior figures still have the intentions to put the club "in the best possible position", but admitted that joining the Super League had "terrible consequences" and was a "mistake".

On Thursday, Venkatesham also confirmed to the fans' forum that he telephoned the other 14 Premier League clubs not involved to say sorry for the Gunners' decision to join the Super League. 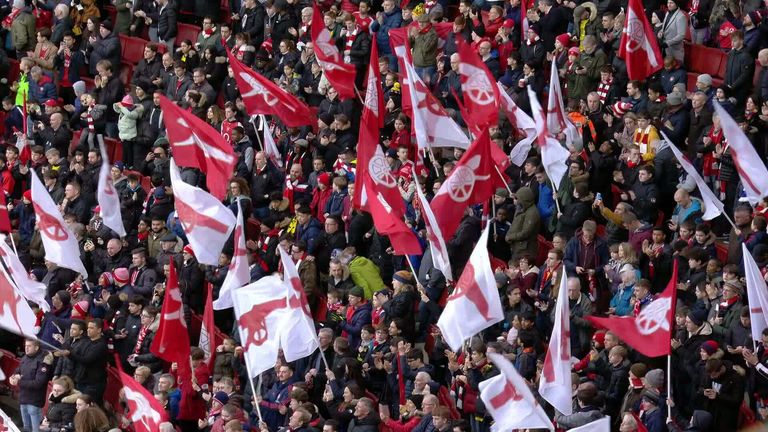 The official Arsenal Supporters' Trust, who were involved in Thursday's forum and have called for Stan Kroenke to leave the club, also met with Prime Minister Boris Johnson and Culture Secretary Oliver Dowden on Tuesday, prior to the Gunners' decision to pull out of the Super League, and the organisation raised concerns with the government amid the fallout caused by the creation of the competition.

Following discussions with the Premier League, the FA, and supporters' groups earlier this week, the government are to launch a fan-led review into football governance.

Meanwhile, the 14 other Premier League clubs want officials at the six clubs who plotted the European Super League breakaway to be removed from their jobs.

On a night of intensive fan protests outside the Emirates, Swedish billionaire Daniel Ek - co-founder and chief executive of music streaming service Spotify - has declared his interest in buying Arsenal.

Ek said on Twitter: "As a kid growing up, I've cheered for Arsenal as long as I can remember. If KSE would like to sell Arsenal I'd be happy to throw my hat in the ring."

Ek is worth £3.38bn (€4.7bn) according to Forbes, following the worldwide success of Spotify. In 2017 he was named the most influential person in the music business by American magazine Billboard. 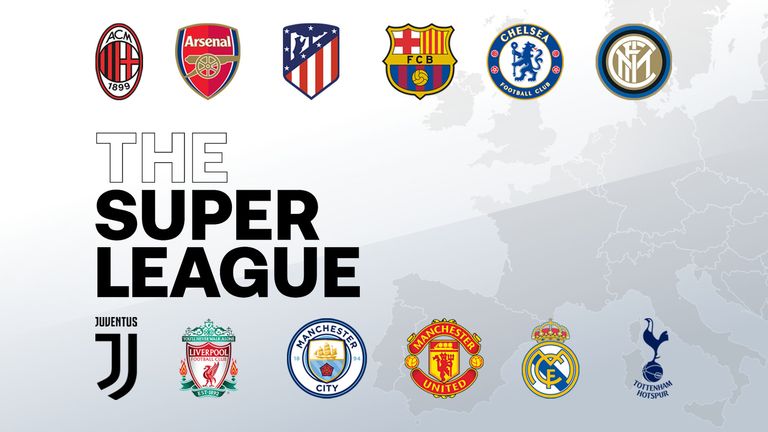 Alan Smith has labelled Arsenal's owners "ignorant" following their involvement in the doomed European Super League proposals, but insists he is not surprised by a decision indicative of Stan Kroenke's distant ownership of the club.

"I wasn't surprised Arsenal were involved, given they have an American owner, an absent owner, who rarely says anything regarding the football club," Smith told Sky Sports.

"There is very little bond between Stan Kroenke and the club. He rarely comes over. His son has a more hands-on connection with the club, but Josh is new to the game, he's not been brought up around football.

"Kroenke obviously has seen that model work in the States with the NFL, NBA, and along with the Liverpool and Manchester United owners, they have seen how profitable it could be. I don't think they understand how the European mind thinks about our sporting culture. It was ignorant not to appreciate there would be such a backlash. It beggars belief.

"For Stan, it's about figures on the page and profits and losses. There is no emotion there. Myself and the majority of Arsenal fans are not surprised he jumped into it, but so did some other clubs. Maybe they had some misgivings and had to be persuaded, but they were persuaded and that's the damning thing."