Report and highlights as Leicester edge to a 2-1 victory at Norwich; Jamie Vardy opened the scoring for the hosts; Teemu Pukki's penalty sent the sides in level at the break; Marc Albrighton's 76th-minute strike proved to be the winner after VAR ruled out Kenny McLean's late equaliser

FREE TO WATCH: Highlights from Leicester's win over Norwich in the Premier League

Norwich were condemned to a 13th straight Premier League defeat as Leicester secured a 2-1 victory at Carrow Road.

Jamie Vardy's early strike (8) gave Leicester the perfect start, but Norwich responded on the stroke of half-time, Teemu Pukki making no mistake from the penalty spot after Caglar Soyuncu was adjudged to have fouled Pierre Lees-Melou in the penalty area after a VAR review.

Leicester restored their advantage in the 76th minute through Marc Albrighton, but Norwich, who threw everything at Leicester late in the second half, thought they had grabbed an instant response thanks to Kenny McLean's header.

However, VAR was once again involved and the goal was ruled out because of a tight offside against Todd Cantwell, who was stood right in front of Kasper Schmeichel as Norwich, who are still waiting for their first points of the season, slipped to a third straight defeat of the season and a 13th across two seasons of Premier League football.

Norwich boss Daniel Farke felt Norwich were denied a deserved point by a "VAR mistake" that ruled out McLean's equaliser.

For me it was a mistake because he can't be offside, but what can we do? We have to accept this. My players make mistakes, the referee makes mistake, even myself and my coaches sometimes make mistakes, so the VAR can make mistakes as well."

"It was a VAR mistake and we have to accept this," Farke insisted. "My player cannot be in an offside position because Todd Cantwell does not take part in the game. He was standing in front of him but he doesn't disturb him. If it is just Schmeichel against McLean, he has no chance."

Meanwhile, for Brendan Rodgers' side, it was a good response to their 4-1 defeat at West Ham last Monday. They move up to eighth after a second win of the campaign.

How Norwich were denied a first point of the season...

In what was an open start to the game, Vardy's fine finish opened the scoring for Leicester.

Canaries full-back Brandon Williams loose pass allowed Ricardo Pereira to steal in and he raced past Ben Gibson before cutting the ball back for Vardy to curl home from inside the area for his second goal of the season but his first away from home in the top-flight since a strike at Tottenham in December.

Norwich were inviting pressure on themselves as they continued to struggle with their passing out from the back, but Leicester weren't without their problems as a slack pass from Soyuncu allowed Pierre Lees-Melou a shooting opportunity, and Kasper Schmeichel had to be alert to palm the ball away to safety.

Man of the match: Youri Tielemans.

Vardy should have had a second when Youri Tielemans' pass fell kindly for the former England striker, but Tim Krul raced off his line to make an important block.

The Norwich fans finally had something to cheer just before the break when Pukki levelled for from the penalty spot after Leicester defender Soyuncu was penalised following a check by VAR. The Foxes centre-back slid in to block a cross when Pierre Lees-Melou had raced into the area, and initially the referee awarded a corner.

However, after VAR had reviewed the incident for close to two minutes, referee Rob Jones was sent to use the pitchside monitor, before pointing to the spot, and Pukki then sent Schmeichel the wrong way to level the scores at Carrow Road.

The momentum was with Farke's side now and after Cantwell and Lees-Melou had fired off target, Pukki should have done better from Max Aarons' perfectly weighted cross, but the striker headed straight at Schmeichel.

Leicester remained a threat, particularly on the break, and James Maddison should have done better when snatching at two strikes from inside the area before Youri Tielemans powered wide from distance

Rodgers reacted and called for Kelechi Iheanacho with 23 minutes left to play and the substitute was involved in what proved to be the decisive goal.

Iheanacho burst past Billy Gilmour before finding Maddison, who flicked into Vardy in space and he was able to find Albrighton on the opposite flank where the winger rifled into the bottom corner after a slight deflection off Williams.

It was cruel on Norwich but Carrow Road was celebrating three minutes later when McLean headed in Milot Rashica's corner, but with Cantwell standing in front of Schmeichel, VAR ruled the goal out for the tightest of offside calls.

Substitutes Josh Sargent and Adam Idah both fired late opportunities wide to ensure Leicester claimed all three points and Norwich remained without a point from their opening three games.

Norwich boss Daniel Farke: "It was a VAR mistake, and we have to accept this.

"My player cannot be in an offside position because Todd Cantwell does not take part in the game. He was standing in front of him, but he doesn't disturb him.

"If it is just Schmeichel against McLean, he has no chance. 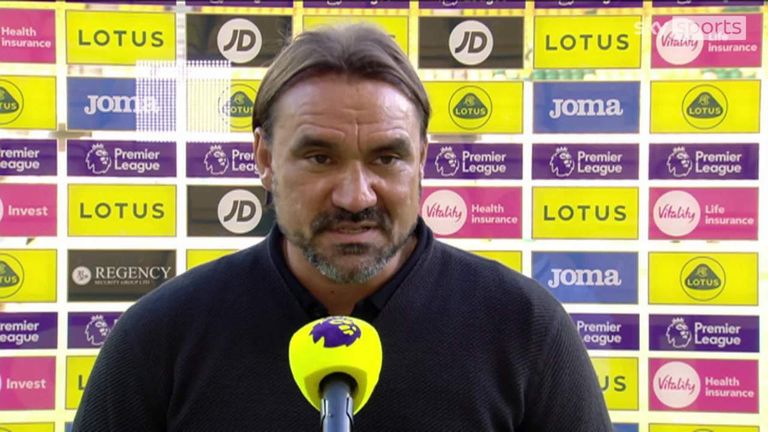 "For me it was a mistake because he can't be offside, but what can we do? We have to accept this. My players make mistakes, the referee makes mistake, even myself and my coaches sometimes make mistakes, so the VAR can make mistakes as well.

"We are disappointed because it is a loss and football can be the cruellest sport in the world.

"Sometimes the better side loses the game and I have the feeling this was the case. After a tough start, the lads were brilliant and fought their way back against one of the best sides in the league. The lads played their hearts out, so many compliments for the performance. We are lacking deserved reward today."

Leicester boss Brendan Rodgers: "I am delighted with three points. We showed a lot of resilience and spirit, especially towards the end.

"In terms of football, I don't think we were anything near our best, but it will come over the course of the season once we get fitter and more precise with our passing.

"It was always going to be difficult, we lost last time we were here so delighted with the three points, the mentality and the way we dug in to show the moments of quality we needed."

"I thought we were a little bit unlucky with the (disallowed) goal, if I am being honest. I have not seen it back yet, but I am not interfering with play, I have not done anything, I have not stopped him, so I am confused by that. It definitely feels like we have been robbed of some points.

"It is disappointing. I must admit that I do feel very disappointed speaking to you now, especially knowing how close we were to getting points. They (Leicester) are very good team. They are right up there for the top four spaces, we know that. And if we can go toe-to-toe with teams like that then we should be in a good place but, ultimately, we have walked away with nothing."

Opta stats: Vardy back scoring on the road...

Leicester have won six of their last seven away league games against promoted sides, with the only exception in that run being a 1-0 loss at Norwich in February 2020.

Since the start of 2019-20, Leicester's Premier League games have seen 34 penalties given, more than any other sides' fixtures have produced in that time (19 for, 15 against).

Jamie Vardy ended of a run of 11 away Premier League appearances without a goal, netting on the road in the top-flight for the first time since December 20th versus Tottenham. Since his Premier League debut on August 31st 2014, Vardy has netted 120 goals in the competition, a haul only Harry Kane (163) and Sergio Agüero (130) can better in that period.

Teemu Pukki's last three Premier League goals for Norwich have all come from the penalty spot, with the Finn last scoring a top-flight goal from open play in December 2019 versus Leicester.

After the international break, Norwich travel to the Emirates Stadium to face Arsenal on Saturday September 11; kick-off 3pm.