Match report as Bruno Fernandes nets double to see Portugal into the knockout stages; Cristiano Ronaldo claimed he got a touch for the first goal; a protester carrying a rainbow flag and wearing a 'Save Ukraine' T-shirt invades pitch; Fernandes netted late penalty after harsh VAR check 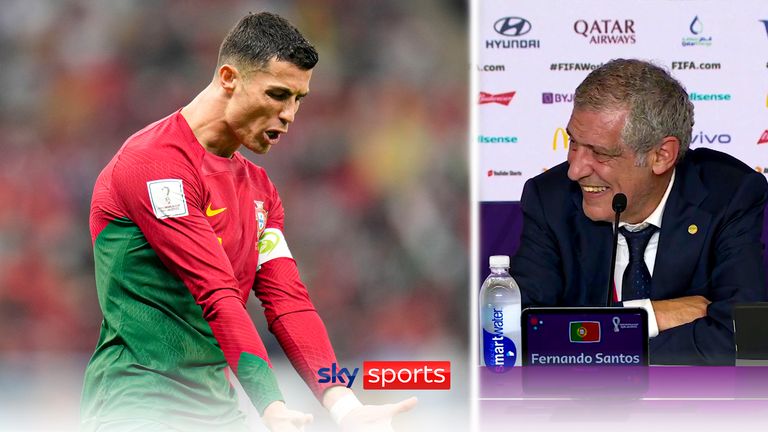 Bruno Fernandes scored twice to send Portugal through to the knockout stages from Group H with a game to spare after beating Uruguay 2-0.

Cristiano Ronaldo thought he had scored a second-half header although the striker did not get a touch to Fernandes' cross which ended up in the net, now proved by Adidas technology inside the ball.

"The feeling I had was that Cristiano touched the ball," Fernandes said. "I was passing the ball to him."

Portugal's deserved lead came just a minute after a protester had invaded the pitch carrying a rainbow flag and wearing a t-shirt which read "Save Ukraine" and "Respect for Iranian women".

Uruguay almost equalised when substitute Maxi Gomez hit a post before Luis Suarez missed from close-range - but they were punished in the 90th minute as a VAR check saw Jose Maria Gimenez adjudged to have handled the ball in the area and, with Ronaldo having been brought off, Fernandes tucked away the spot kick.

How Portugal qualified for the last 16

Portugal dominated a drab first half yet Uruguay had the best chance when Rodrigo Bentancur wonderfully weaved through the defence, but was denied one of the great World Cup goals by goalkeeper Diogo Costa.

Nuno Mendes left the pitch in tears after being forced off injured although things did improve for Portugal in the second half once the game had restarted following the protest from a supporter.

Fernandes floated a cross into the box for Ronaldo, who had a clear header at goal. However, he did not get a touch to the ball which carried on through into the corner.

Uruguay rallied with 15 minutes remaining and started playing some of their best football. Gomez struck a post with a first-time effort from the edge of the box, Suarez stabbed an effort into the side-netting when he should have scored and Giorgian de Arrascaeta had a chip saved by Costa.

They were made to pay for their missed chances at the end of normal time when Gimenez's trailing hand touched the ball as he lunged into a tackle on Fernandes, who dispatched the penalty awarded by referee Alireza Faghani after he was instructed to check the pitchside monitor.

Fernandes' almost completed a perfect night as his low drive from the edge of the area came back off a post.

Portugal are through to the last 16, along with France and Brazil, but still need a point to be declared Group H winners. Ghana are the only remaining rival for top spot, but the Africans could still finish behind both South Korea and Uruguay.

For those two teams, the equation is simple: win or go home. But even winning may not be enough. Victories for both Uruguay and South Korea would leave them level on four points and separated only on goal difference, but a win for South Korea would be academic if Ghana beat Uruguay.

A point for Ghana coupled with a win for Korea would also make goal difference - and possibly goals scored - the ultimate adjudicator.

"We are looking for victory against Ghana, there is no doubt about it. If we have to make modifications, that is what we will do.

"We didn't play well but we had our chances and we were pushing forward. We were trying for it. But sometimes the opponents are good, they play well, they counter your game plan and don't let you be where you would like to be.

"Our game improved with the two new players. The game was asking for them," Santos said. "At the start, Portugal owned the ball, they dominated the ball. After, we played well. We need to gamble more and to move more freely."

When asked about the significance of facing Ghana at a World Cup, Alonso added: "For us, it's a different history. They are looking for classification, us too. It has nothing to do with what happened years ago."

"We clearly showed we are a very strong unit, both in the quality of the game and in the bond between them. That's how positive things are achieved. We will always work like this."

What else happened at the World Cup on Monday?

A manic Monday at the World Cup kicked off with Cameroon coming back from 3-1 down to draw 3-3 with Serbia in Group G. It is a result that does little to help either side, who both needed to win to boost their qualification hopes although head into their last matches still with a chance of finishing second.

The goals continued to flow as Ghana secured a crucial 3-2 victory over South Korea in Group H, leaving them with all to play for in their final match against Uruguay.

Brazil secured a place in the knockout stages by edging past Switzerland 1-0 thanks to Casemiro's goal.