Match report as Rangers notched up a record 20th consecutive home win in the Scottish Premiership to get their title defence off to a winning start; Ianis Hagi, Scott Wright and Kemar Roofe goals sink Livingston 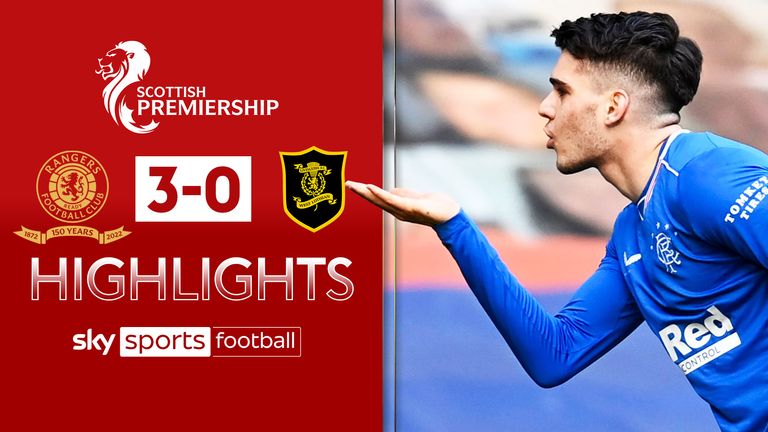 Highlights from the Scottish Premiership match between Rangers and Livingston.

Rangers began their Scottish Premiership title defence on a winning note as goals from Ianis Hagi, Scott Wright and Kemar Roofe secured a 3-0 victory over Livingston at Ibrox.

Steven Gerrard's side stormed their way to the title last season, winning the league by a 25-point margin, going the entire campaign unbeaten and surpassing the 100-point mark.

Hagi blasted the hosts in front within eight minutes, but the hosts struggled to create many more clear-cut openings as Livingston frustrated the champions. It wasn't until his replacement Wright struck a sublime second (78) that the game was put to bed.

With Livingston beaten, Roofe pounced on a defensive mix-up to add a late third (90).

The result means Rangers have now gone 40 league games unbeaten and have won nine of their last 10 league meetings with Livingston since a 1-0 defeat in September 2018, their first such match against them under Gerrard. 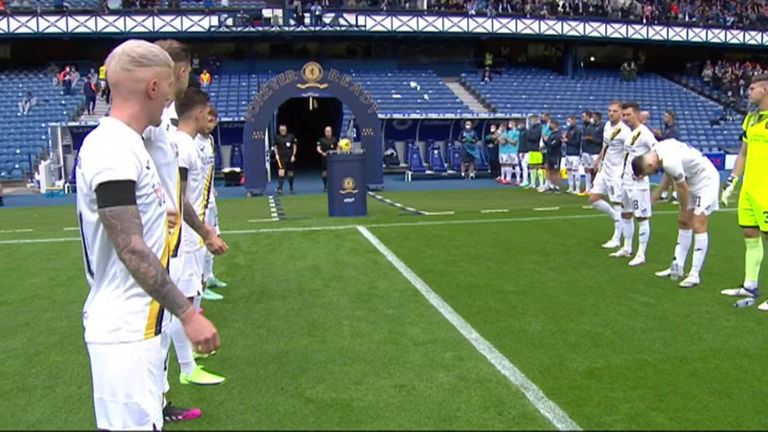 Livingston give the champions Rangers a guard of honour as 'Simply The Best' rings out to 23,000 inside Ibrox

Man of the match: James Tavernier.

Rangers won the 2020/21 Scottish Premiership title without losing a game, one of only four occasions that a team has remained unbeaten in a Scottish top-flight league season.

Gerrard named a strong team despite the absence of Alfredo Morelos, who was still in quarantine while new boy Nnamdi Ofoborh remained out as the club continue to deal with a heart issue.

With 23,000 fans returning to Ibrox for the curtain-raiser, the hosts needed just eight minutes to assert their superiority. 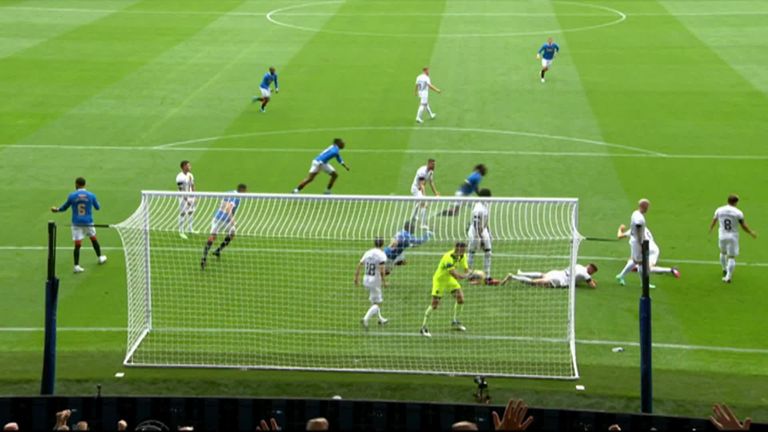 James Tavernier's free-kick was killed instantly at the far post by Hagi, who chopped inside two Livingston defenders before reversing his shot beyond Max Stryjek.

"I'm not sure what James Penrice is doing coming inside. From a Livingston point of view, you've got to defend it better," Kris Boyd told Sky Sports.

It was a good finish from Hagi, who had been called upon to increase his output by Gerrard, but the game became a little stop-start before the Romanian was forced off with an injury sustained in a challenge from Adam Lewis.

It was a dominant first half from the champions despite their slender advantage, with the visitors failing to register an attempt of any note compared to Rangers' four. Indeed, David Martindale's side only managed two touches in the opposition box inside the opening 45 minutes.

The only disappointment for Gerrard was that his side hadn't tested Stryjek more in the Livingston goal, with Tavernier's rising shot from Hagi's lay-off and Joe Aribo's poked effort moments after the opener the closest the hosts came to extending their lead.

This was the first time Rangers kicked off a season as defending Scottish champions since 2011/12, but their somewhat lacklustre showing continued into the second period.

It took until the hour mark for the chance of a second to be forthcoming as Connor Goldson's low ball into the box found Ryan Kent on the edge. Despite having so much time to control and shoot, he drew a comfortable save from Stryjek down to his left. 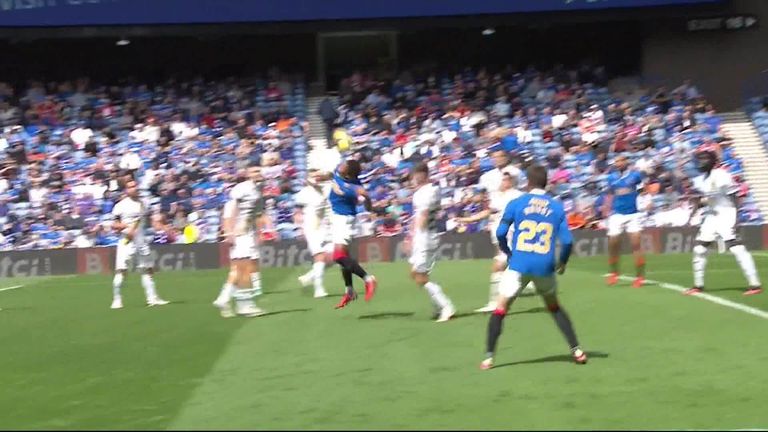 James McFadden told Sky Sports: "You expect Kent to do better from that position. Rangers are mostly attacking down the right-hand side, no surprise with Tavernier operating there."

But Rangers would kill off the game in the final 12 minutes through a moment of real quality.

Tavernier was the architect again as he nodded on a high ball in the box, which Wright coolly collected before finishing from an angle with the outside of his right boot. 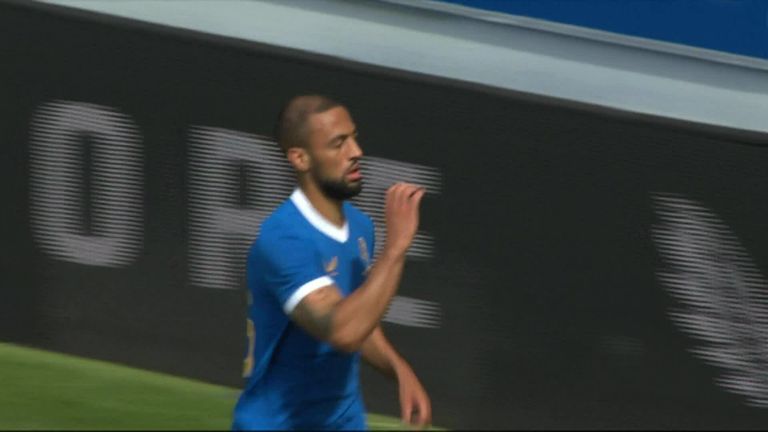 Roofe had looked sharp since replacing Fashion Sakala in the 71st minute - and he sniffed out a third in the final minute of normal time as sloppy Livingston defending allowed the former Leeds striker to tap home.

Rangers were far from their best, but they didn't need to be in order to set the standard once again, making the perfect start to their title defence. 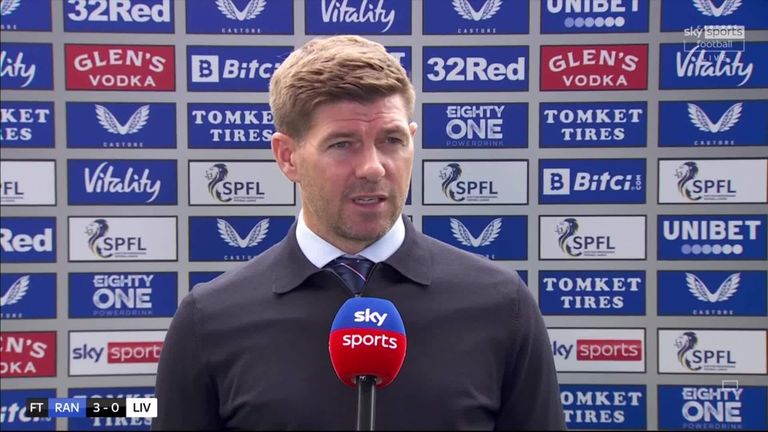 Rangers manager Steven Gerrard claimed he was pleased with a strong and professional performance against Livingston on the opening weekend of the Scottish Premiership, running out 3-0 winners.

Rangers boss Steven Gerrard: "I thought it was good in large parts, and we played with a lot of control. I thought from the first whistle up to going 1-0 up we were terrific, playing with a real urgency and intensity that Livingston struggled with.

"I thought our mentality changed at 1-0, we complicated the game a bit, and everyone was taking that extra touch, slowing it down.

"From 2-0 to seeing the game out we were fantastic again so it's just that middle part where we need to take less touches and keep finding outcomes - crosses, shots, to test the goalkeeper.

"We knew we'd have all the ball, and the pressure was on us to get up and running as soon as we could, and I think we did that." 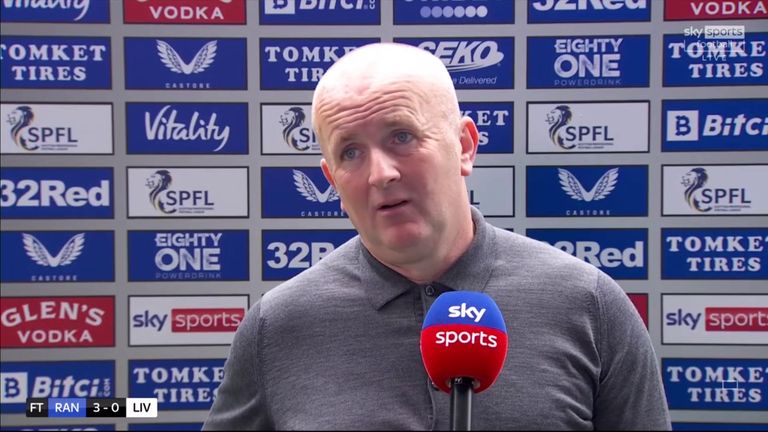 Livingston manager David Martindale praised the effort on display from his side despite the 3-0 defeat to Rangers at Ibrox.

[Will Hagi be fit for Tuesday's Champions League tie?] "Potentially missing, but we've got good physios here, good doctors, so hopefully they can pull the rabbit out of the hat and get him ready for Tuesday because he's going to be important for us."

Livingston boss David Martindale: "It took us 15 minutes to get to grips with their shape and what they were trying to do. We knew we were going to spend a lot of time in their half but we were disappointed with the opening goal as it came from a set play.

"I was fairly happy at half time as we responded well and Max didn't have another save to make. While it was 1-0, you always have a chance in the game but it was always going to be tough. When they scored a second and we were forced to go down to 10 men due to an injury the game, and when that happens at Ibrox you're done.

"Rangers deserved to win the game but I thought 3-0 flattered them."

"You're probably looking to create a bit more. Rangers had a lot of the ball but didn't get in behind much. But first day of the season, there is going to be rustiness. It's a clean sheet, three points, and Steven Gerrard will be delighted.

"I think it'll be a big season for Kemar Roofe. If he can get a run, I think he is that X-factor in that central position for Rangers. Morelos has been really good, but I think Roofe can take it up a level."

Rangers now go to Malmo in their Champions League third qualifying round first leg at 6pm on Tuesday, while Livingston host Aberdeen in the Scottish Premiership on Sunday August 8 at 3pm.

Rangers are back in domestic action away to Dundee United next Saturday, live on Sky Sports Football; coverage starts at 12pm with kick-off at 12.30pm.