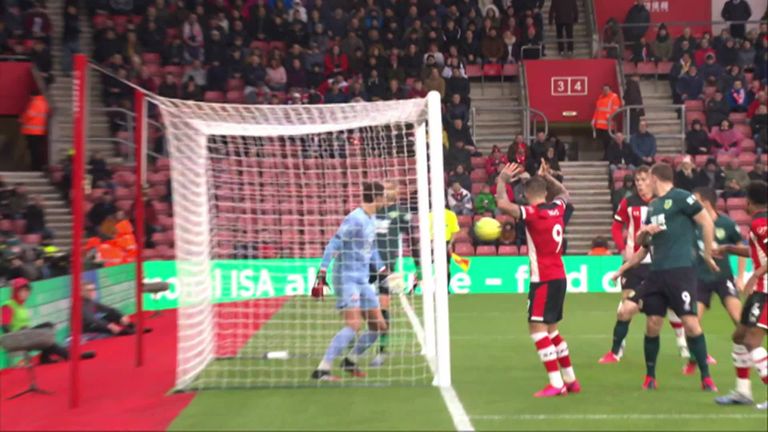 The visitors took the lead with a freak goal when Ashley Westwood scored straight from a corner (2) after Danny Ings had misjudged the flight in the wind. Ings then hauled his team level (18) with a powerful strike from range, netting his 18th goal of the campaign in all competitions.

However, Burnley always seemed more comfortable in the conditions and Vydra - on as a substitute for the injured Chris Wood - scored a brilliant individual goal (60) to hand the visitors their third win in their last four matches.

This defeat for Southampton means they still have the worst home record in the Premier League this season, taking just 11 points from their 13 matches at St Mary's.

In wet and windy conditions as the early stages of Storm Dennis battered the south coast, Burnley adapted far quicker than the error-strewn hosts. The Clarets were ahead inside two minutes, scoring their quickest away goal in the Premier League and probably their strangest.

Westwood whipped in a pretty mediocre near post corner that looked set to be cleared by Ings, who was marshalling that area, however, he misjudged the flight of the ball and thought it was going out for a goal kick. His error proved costly as the ball squirmed over the line despite Alex McCarthy's attempts to scramble the ball back into play.

Southampton were struggling to get their attacking patterns going as Burnley's direct style into Jay Rodriguez and Chris Wood suited the conditions.

However, Ings looked a man desperate to make up for his error and he produced a moment of quality to draw his team level on 18 minutes. There did not look much on from 22 yards but a quick shift of direction opened up space for a strike and the striker swept in a fierce drive off the wet surface past Nick Pope.

It was a bad few minutes for Burnley as striker Wood limped off with a hamstring injury after pulling up in the build-up to the Southampton goal.

Our tipster Jones Knows correctly advised a Burnley win at 9/2 - read his column every week on Sky Sports.

Sofiane Boufal, who was looking dangerous against Phil Bardsley, soon followed Wood down the tunnel with a knee injury as Southampton continued to find any attacking rhythm.

With conditions worsening after half-time as the centre of storm moved through Southampton, chances were few and far between.

However, it was Burnley that carried the bigger threat in the final third and got their noses in front with half an hour to play.

Jeff Hendrick's direct ball into Vydra caused issues for erratic Saints centre-back pairing of Jack Stephens and Jannik Vestergaard. The Burnley striker dummied to shoot past Vestergaard then showed supreme composure in the conditions to find the top corner with a rasping strike.

Considering he had not scored for two years, the calmness in front of goal he showed was impressive.

The onus was then on Southampton to take the game to Burnley but they did not possess the required tools to break them down with Ben Mee and James Tarkowski at their brilliant best.

In fact, the first save of the game Pope had to make came in injury time when Pierre-Emile Hojbjerg drew a block from the goalkeeper from a tight angle.

After powering from out of the relegation zone into mid-table, Southampton have slipped back to their old ways while Burnley have moved up to 10th place.

It feels harsh to single out one Burnley player as this was all about team cohesion and brilliant management in the conditions from Sean Dyche. However, once again, the Burnley skipper stood out as the most important player on the pitch. It was the same in their recent 2-0 triumph at Manchester United and although he was not as busy as he was that day, his presence and ability to clear everything that came into his box was a key reason why Burnley won this match. There are not many better centre-backs in this league in current form.

Southampton boss Ralph Hasenhuttl said: "We played some good balls in the first half and tried to give them a little bit of pressure, but it's not easy - they are very well-organised, aggressive against the ball and never give you a chance to win the ball because they immediately play long.

"Everybody knows how they play, but they do it well and they did it well today. It's always nasty to play against, but we knew this.

"We got the equaliser and spoke at half time about leaving everything on the pitch in the second half.

"Even then, you could see it wasn't easy to keep them in their half. We conceded the goals too easily and losing the game was deserved."

Burnley boss Sean Dyche: "I think all wins are big wins in the Premier League. We got more of a grip of the game in the second half, I can't remember too many times they opened us up. On the counter we had three or four moments that we couldn't find the final pass. It is a tough place to come with their form lately. The weather was horrendous."

Southampton are back at St Mary's next Saturday when Aston Villa are the visitors. Meanwhile, Burnley host struggling Bournemouth; both games are 3pm kick-offs.