Chelsea, Valencia and Ajax can all still qualify from Group H 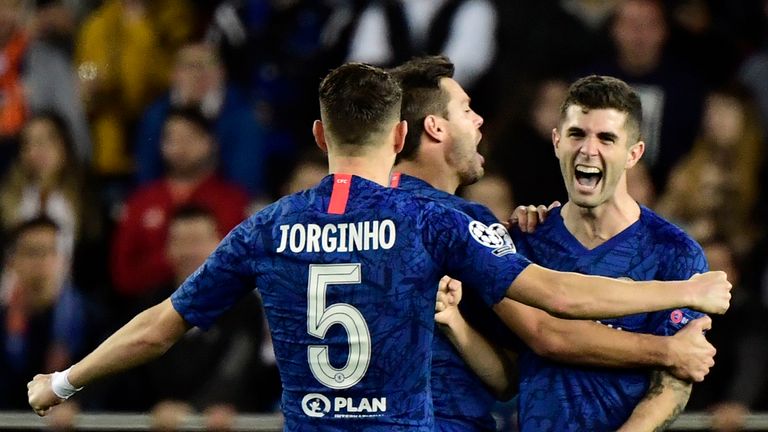 Frank Lampard says both Chelsea and Valencia had enough chances to win after the 2-2 draw in the Champions League.

Chelsea's qualification for the last 16 of the Champions League will go to the final game after a dramatic 2-2 draw with Valencia.

A win for either side at the Mestalla would have sent them into the knockout stages, and Valencia broke the deadlock in the 40th minute as Carlos Soler slotted home. Mateo Kovacic levelled for Chelsea straight after, but the half ended on a sour note when Tammy Abraham was stretchered off on the stroke of half-time.

Five minutes after the break, Christian Pulisic (50) had a goal ruled out for offside, but the decision was overturned after a lengthy VAR review. Just after the hour mark, confusion reigned when Valencia were awarded a penalty, but Dani Parejo's effort was well saved by Kepa Arrizabalaga.

Chelsea looked to be heading into the last 16, but there was another late twist when Daniel Wass' cross (82) pinged into the back of the net via the crossbar to send qualification from Group H into the final game-week in a fortnight's time, with Chelsea, Valencia and Ajax all in contention for two spots in the knockout stages.

How Chelsea drew in Spain

Knowing a win would see them through, Chelsea began the game well and should have scored inside three minutes. Reece James put a sensational cross into the area and picked out an unmarked Willian inside the six-yard box. However, from close range, he could only send his header over the crossbar.

Man of the match: Mateo Kovacic.

Maxi Gomez should twice have given Valencia the lead as the half continued. In the 19th minute, Rodrigo squared the ball for him at the back post but he mistimed his kick from two yards out and the ball ran past him. Not long after, it was another Rodrigo cross that went past Ferran Torres in the middle and found Gomez again at the back post, but he sent his shot flashing across the face of goal.

Valencia 'keeper Jasper Cillessen was called into action in the 39th minute, making an acrobatic, fingertip save from an Abraham shot, but, mere seconds later, Valencia went ahead. Rodrigo was once again the provider, set away down the right-hand side, with his cross met by an unmarked Soler, who was able to slot home past Kepa. The goalkeeper got a hand to it, but was unable to keep it out.

One minute and 47 seconds later, Chelsea hauled themselves level. Valencia's defensive headers saw the ball into the feet of Kovacic, who showed some superb control before sweeping the ball goalwards, through the legs of Torres. It then wriggled under Cillessen - who should really have saved it - to see the scores level at half-time.

But in the final minute of the first period, Chelsea suffered a blow as Abraham picked up a nasty looking injury. He rose to meet a corner but as he came back down, he landed on his back across the legs of Ezequiel Garay and looked to be in real pain. He initially started walking off the field after some medical attention, but eventually had to use the stretcher to get back to the dressing room.

Five minutes into the second half, and VAR made itself known at the Mestalla. James whipped another superb cross into the area, which Kurt Zouma nodded on for Pulisic to poke home. The linesman initially ruled the goal out for offside but, after a VAR review of around three minutes, the 3D lines showed that Pulisic was, in fact, onside and the goal was given, much to the dismay of the home crowd.

Valencia would have felt there was some kind of retribution when they were awarded a penalty 12 minutes later after Jorginho was adjudged to have fouled Jose Gaya in the area. Confusion reigned as the referee Felix Zwayer appeared to initially award the spot-kick, before seemingly reversing his decision, but VAR looked to have given it after a review as Parejo put the ball on the spot. However, Kepa leapt the right way to save his effort and keep Chelsea ahead.

But in a fashion in keeping with the dramatic encounter, it was a bizarre goal that secured the point for Valencia. Wass was fed down the right-hand side by Parejo, before flashing a cross into the area, which pinged off the far post before beating Kepa in the goal.

Man of the match - Mateo Kovacic

Kovacic got his goal - his first for Chelsea on his 71st appearance - superbly turning on the ball and firing low into the bottom corner from outside the box. He almost had a second shortly afterwards when he put a diagonal effort too close to the goalkeeper.

He was a superb outlet for Chelsea going forward and with the youngsters getting many of plaudits this season, his contributions cannot be overlooked.

Frank Lampard: "You respect the opponent, the Champions League and how tough it is, and respect a stadium like this. It was a really tough match. But it does keep it in our hands. Now it is on us in the last game at home to Lille. There were positives and negatives out of the game but that is a positive."

Chelsea are back in action on Saturday, taking on West Ham at Stamford Bridge in the Premier League (kick-off 3pm). For Valencia, they host Villarreal in La Liga on Saturday (kick-off 8pm).

In two weeks' time, Chelsea will host Lille as they look to secure their place in the last 16, while Valencia will take on Ajax as the three teams battle it out for qualification.