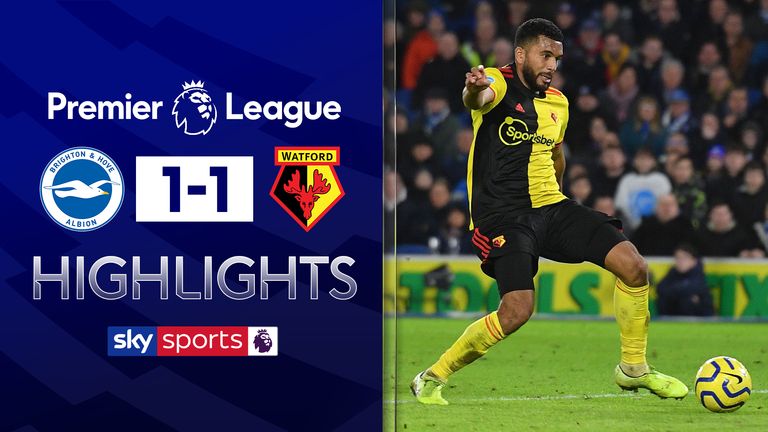 By Charlotte Marsh at the Amex

FREE TO WATCH: Highlights from Brighton's draw with Watford in the Premier League

A second-half own goal from Adrian Mariappa handed Brighton a deserved point against Watford, with the relegation-threatened sides playing out a 1-1 draw.

Neither side went into the game in good form, but Watford struck first with a fine solo goal from Abdoulaye Doucoure (19), putting some demons to rest after also scoring an own goal in the 3-0 loss to Brighton on the opening weekend.

Brighton pushed for the equaliser in the second half and it was another Watford slip that sealed a vital point for the hosts as Etienne Capoue hammered Alireza Jahanbakhsh's cross into his own net.

But the Seagulls remain winless in 2020, now three points outside the relegation places, while Watford remain 19th and have now gone five games without a victory.

How the points were shared in a relegation battle

Neither side created much in the opening exchanges it took a fine solo goal from Doucoure to break the deadlock. He collected a bouncing loose pass from Aaron Mooy, which took a slight nick of Etienne Capoue on the way through, before driving to the top of the area and as the Brighton shirts closed in, he hammered the ball past a leaping Mat Ryan.

Despite that moment of quality, the remainder of the half continued as it had started with few sights of goal, although Ben Foster was forced into a save in the 31st minute. Solly March played a cross into the area from the right wing and despite a cluster of players around him, the goalkeeper got down to push the effort away. Ezequiel Schelotto picked up the loose ball, but Craig Cathcart blocked his eventual shot.

Man of the match: Solly March.

Brighton were brighter at the start of the second half. An early free kick from Pascal Gross was punched away strongly by Foster before Glenn Murray just missed a fierce cross from Schelotto. The striker drove in towards the near post and stretched out a foot, but could not get there in time to turn the ball home.

After a stop-start period littered with fouls and free kicks - mostly for Brighton - the hosts went close again as Lewis Dunk headed a Mooy cross just wide in the 69th minute. Foster made a huge save not long after as Mooy went close himself, but the Watford goalkeeper stuck out a leg to see the effort away.

But around 60 seconds later, Foster was unable to keep out Mariappa's own goal. Substitutes Neal Maupay and Jahanbakhsh linked up down the right, with the latter flashing an inviting cross into the area. Mariappa was just ahead of Murray and sent the ball hammering into the back of the net with an outstretched leg.

It was a deserved equaliser for Brighton - even if not from one of their own players - and while both tried, neither side could find the all-important winner against a relegation rival.

Man of the match - Solly March

March was one of the four changes made by Graham Potter ahead of the game, and he certainly proved his worth for inclusion. He gave Watford and Adam Masina a torrid time down the left-hand side in the first half, although was quieter in the second.

But he still managed eight crosses - six of which were from open play - and was involved in 20 duels. Defensively, he made two tackles and five interceptions, with all the numbers the highest or joint highest of any Brighton player.

Brighton overall will be disappointed to have not converted more of their chances and March should have picked up an assist for his efforts. There is surely more to come from him as the Seagulls look to beat the drop.

Brighton manager Graham Potter: "I'm really proud of them today because when you go behind, especially at home and with the importance of the game, things get edgy and nervy so that makes it more challenging for us because we're the ones who then have to find the answers and create something to score.

"For the first 20 minutes of the game, I thought we were doing quite well and then they score and goals change football. Everything changes - the complexion of the game, the atmosphere in the ground, the environment, everything. We had to huff and puff at that point, show character to not concede again and make sure we were OK.

"Then as the game goes on and you're 1-0 down, you've got to try and think about how you can affect the game. We tried everything and in the end it's nice for us to get something from the game.

"We wanted to win and if you speak to Nigel, he would want to win as well. But we didn't, we got a point and every point in this league is so difficult to come by… We can only reflect on the 90 minutes, I think we more than deserved a point and the performance in terms of the spirit and quality will stand us in good stead going forward.

"I'm delighted with the character of the players and the spirit that they showed. Even though we're disappointed with two points in the last two games, there's a lot to be really happy with."

Watford manager Nigel Pearson: "It's unfortunate [the own goal], we worked exceptionally hard today and balls like that are very difficult to deal with. It's a ball that flashes into the box and the defender has to try and deal with it.

"I do also recognise the fact that if he misses, they probably don't get anybody on the end of it, but I think you'll find with situations like that, the timings of it doesn't give you much reaction time so it's unfortunate. It would have been nice to be talking about a hard-earned three points but it's a hard-earned one point.

"It's a game in which we worked very hard out of possession. I thought we were very disciplined, we frustrated them apart from Foster making one save in the second half [from Mooy], I don't think we really gave them too many opportunities to hurt us.

"In terms of frustrating a side who are mostly possession-based, I thought we worked very hard. Our mixture of being defensively deep but pressing from the front was very good. The problem was that we sometimes didn't make enough of our own possession when we had it.

"We've worked hard to get ourselves back into a competitive situation so we're a lot more encouraged by the situation than we were at the start of December… Our players are really committed and they will continue to do everything they can to put us in a better position as we move forward."

Both teams will take their winter break now and play again in two weeks time. Brighton will travel to Sheffield United on Saturday 22 February with Watford also playing away, heading to Old Trafford to play Manchester United on Sunday 23 February.