Rangers come from behind to win 2-1 at Livingston; Joel Nouble opened the scoring for the hosts; Scott Arfield and James Tavernier scored in quick succession to claim all three points on the opening day of the new Scottish Premiership season 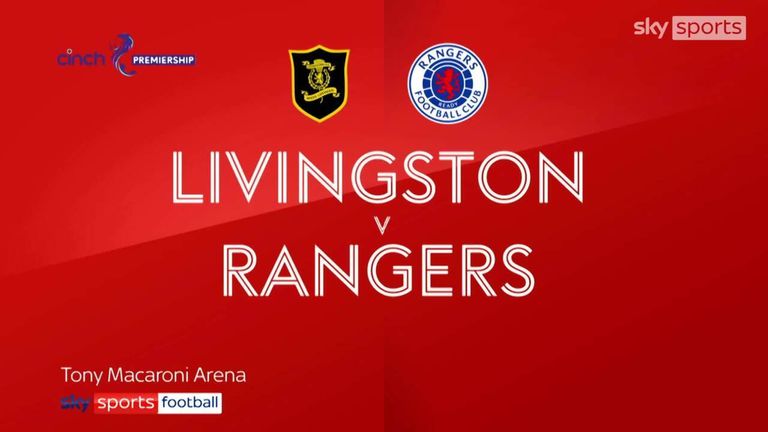 Highlights of the Scottish Premiership match between Livingston and Rangers.

Two goals in just 101 seconds saw Rangers come from behind to secure a 2-1 win over Livingston on the opening day of the new season.

Joel Nouble stunned the Ibrox side as he lobbed the ball over goalkeeper Jon McLaughlin to give the hosts the lead after just four minutes at the Tony Macaroni Arena.

The home side frustrated Rangers as they struggled to create any real chances in the first half as the new Scottish Premiership season got underway in West Lothian.

New Rangers signing Antonio Colak saw his goal disallowed for offside before midfielder Scott Arfield came off the bench to head in the equaliser in the 73rd minute.

The visitors were hungry for more and captain James Tavernier quickly curled a free-kick into the net to take the lead.

It is the second season in a row Rangers have claimed a victory over Livingston on the opening day.

Rangers get title bid off to winning start

It had been a fraught afternoon for Rangers fans who saw Jon McLaughlin preferred to last season's number one Allan McGregor in goal.

There were competitive debuts for John Souttar, Tom Lawrence, and Antonio Colak for the Gers. Goalkeeper Shamal George was making his Livi debut after signing from Colchester.

The game was paused in the opening minutes by referee Don Robertson to allow some smoke from away fans' pyrotechnics to clear from the Livingston box.

However, the enthusiasm of the Gers supporters was soon dampened when the home side took the lead with a route one goal. 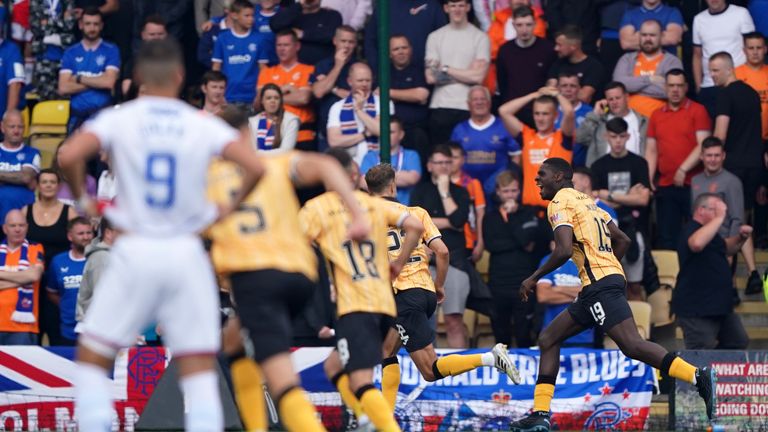 Joel Nouble scored his first goal for Livingston in some style as his lob gave them an early 1-0 lead over Rangers in the first match of the SPFL 2022-23 season.

George sent a long ball up the park, skipper Nicky Devlin headed on and Souttar failed to deal with the danger as Nouble moved behind him to lob McLaughlin from inside the box for his first goal at the club.

Rangers response was predictable and frantic as a series of crosses and free-kicks into the packed penalty area were repelled by a well-organised Livi defence.

Livingston should have doubled their lead in the 27th minute when Andrew Shinnie's searching free-kick found Ayo Obileye unmarked but he headed straight into the arms of McLaughlin.

Rangers resumed their dominance, but the goal would not come. 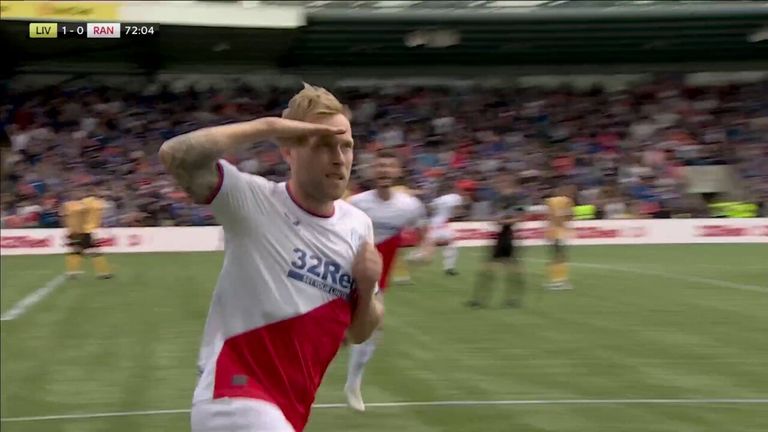 Malik Tillman, on loan from Bayern Munich, replaced Scott Wright for the start of the second half to make his Gers debut and he helped the visitors step up the pressure.

However, Livingston held firm and maintained a threat on the break, with the height and power of Nouble proving a handful.

Colak had the ball in the net in the 54th minute but was ruled offside before Tillman had a close-range drive saved by George. 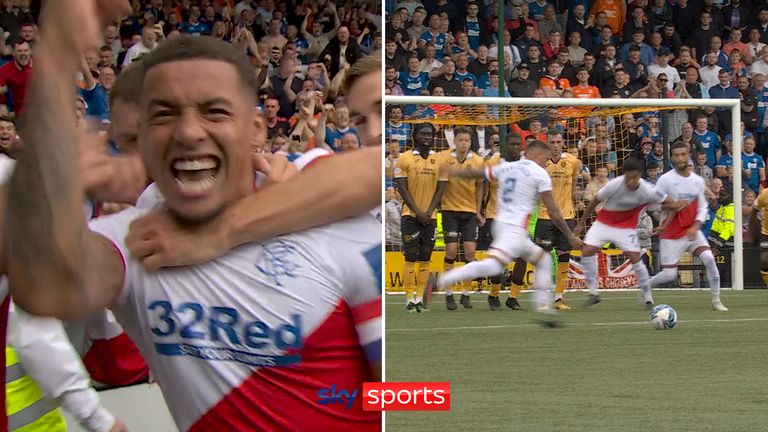 Rangers captain James Tavernier struck a powerful free-kick past Livingston goalkeeper Shamal George to put his side 2-1 up in their Scottish Premiership opener.

John Lundstram, Tillman, Tavernier and Borna Barisic all had efforts as the Govan men kept pushing before Arfield, who was brought on with James Sands for Souttar and Glen Kamara in the 67th minute, headed in a cross from Ryan Kent.

It was a full turnaround two minutes later when skipper Tavernier curled in a free-kick from just outside the box.

The Light Blue relief was palpable with Livi's commendable efforts ultimately counting for nothing. 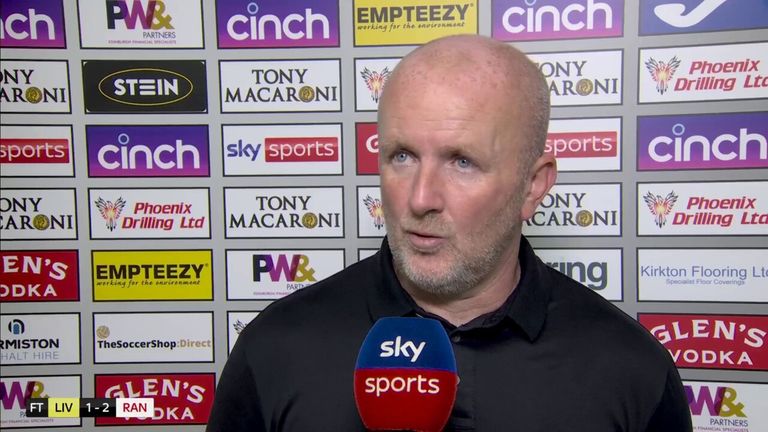 David Martindale says he was left frustrated after his Livingston side conceded twice in two minutes against Rangers, that resulted in a 2-1 loss for the home side.

Livingston boss David Martindale said the result was harsh on his players:

"It's frustrating because we had a foothold in the game.

"We got our goal the defended really well, but we knew they were going to come at us in the second half.

"I feel disappointed for the boys because if that came out a 1-1 draw I don't think anybody is questioning the result.

"There are not many times when we lose a game of football and I actually praise the boys. I said that in the changing room. 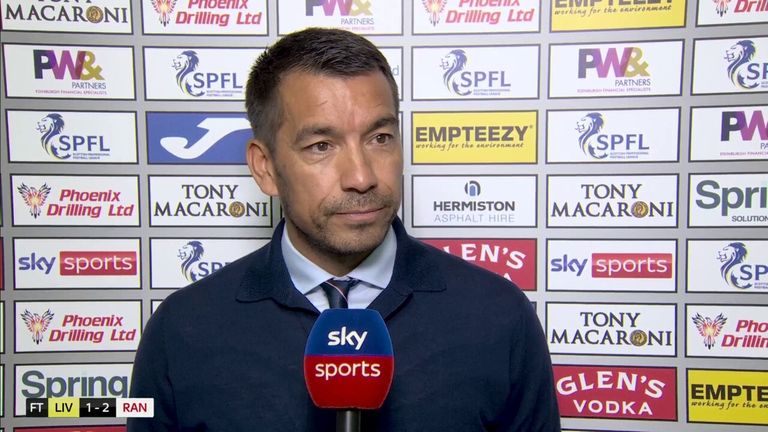 Rangers boss Giovanni van Bronckhorst wasn't pleased with their first half performance against Livingston but was delighted with their second-half intent in fighting back to win 2-1.

Rangers boss Giovanni van Bronckhorst was delighted with the desire in his team:

"We had to dig deep to win today.

"First half we didn't play well and we conceded the first goal too easily, but in the second half we saw the team I like to see creating chances and dominating the game.

"It's always good to start with a win. We're now concentrating on a big game on Tuesday in Belgium.

"Two days preparation for that so we have to use every hour we have to make sure we're ready."

Rangers will travel to Belgium for the first leg of their Champions League third qualifying round clash with Union Saint Gilloise on Tuesday. They go with optimism after their opening day victory.

They return to host Kilmarnock in the Scottish Premiership on August 6.