Ryan Sessegnon: "I didn't think twice, I knew I had to make it open I had to show everyone, this stuff is not acceptable in this day and age. It is crazy, it is 2020 and this is still going on; Tottenham youngster is on season-long loan at Hoffenheim but sees his future in England 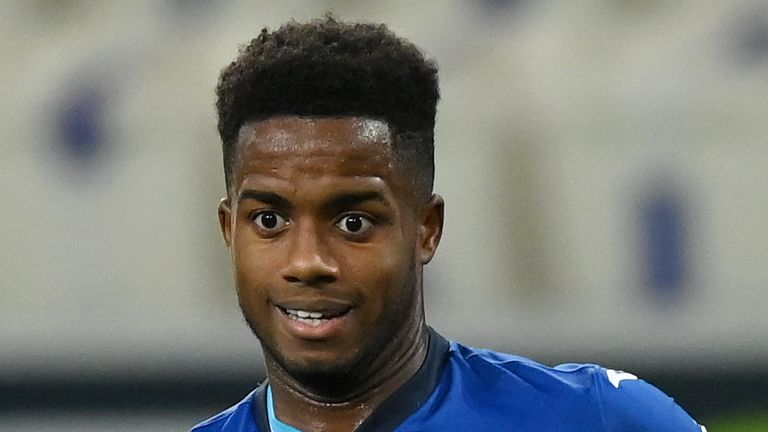 Ryan Sessegnon speaks to Sky Sports News' Gail Davis about his reaction to getting racist abuse on social media, and how Jose Mourinho is keeping an eye on his progress at Hoffenheim

Ryan Sessegnon talks about the impact racist abuse has had on him, how social media companies can combat the problem, the support of both Hoffenheim and Tottenham, and where his football future lies, in an exclusive interview with Sky Sports News.

Four weeks after completing a season-long loan move from Tottenham to Hoffenheim, Sessegnon made his first start in Germany's Bundesliga.

It was not the debut he was hoping for, with Hoffenheim losing 3-1 to Union Berlin. As he got back on the team coach after the game on November 2, he took out his phone and there it was, vile and sickening racist abuse on social media.

"I've looked at it and I thought this doesn't feel real. It doesn't look real, but of course it is, it's Instagram, it is a real account, and someone has sent this to me," Sessegnon tells Sky Sports News.

"I didn't think twice. I knew I had to make it open I had to show everyone. This stuff is not acceptable in this day and age, it is crazy, it is 2020, and this is still going on. It's something that I feel very strongly about, so I had to publicise it."

Sessegnon posted it on Instagram and said the response he received was incredibly positive. There was rock-solid support from loan-club Hoffenheim, who pride themselves on values of "tolerance, integration and respect".

Hoffenheim's players raised their arms after a team goal in the Europa League a few days later in solidarity with Sessegnon. Tottenham staff, the players, and friends and family, were all there for him.

Sessegnon has learnt to cope by surrounding himself with good people but it did not stop him from getting angry, really angry.

"It makes you scream. You are confused as well at the same time," he says.

"You just think how can people say these things because of the colour of your skin, it doesn't make sense.

"I was angry for the first two to three days and then calmed down and tried to make sense of it. And then you have to rise above it, by playing games and playing more to prove the doubters wrong."

I ask him: "If you had the chance to speak directly to the person who sat down and attacked you what would you say?"

He pauses for a moment and replies: "You might be thinking ok, it's just words, but that word or phrase is going to affect another person and people around them.

"They don't know what it means they don't know how it feels. For them they just hide behind a screen and write these messages, it is crazy."

What about the answer to stopping hate? So much is out of Sessegnon's control but he has the power to bring about change.

"Rise above it with what we do on the pitch," Sessegnon replies.

"The footballing world is trying to do better. The resources are helping but I truly believe if we stand together it will make a difference."

The saddest thing, he says, is it is just too easy to make an account on Instagram and then attack people in this way.

He wants social media companies to do more, saying there should be a process and accountability, otherwise it is a cycle that will never stop.

A few years ago he admits he might not have had the confidence to show the world what he was subjected to. But players like Wilfried Zaha, Raheem Sterling and Troy Deeney have helped empower the former Fulham player.

"People have realised that it can't keep going on. If we come together and make a stand we can change the future."

'Keep taking the knee until there is change'

While the racist abuse continues so should players continue taking the knee, Sessegnon adds.

There has been plenty of debate about the politics behind the action, but for Sessegnon the reasons for taking the knee are simple.

"I believe in no racism," he says.

Messages from Jose and Spurs players

Sessegnon has refused to let the incident overshadow his time in Germany. He is enjoying life and, most importantly, he is playing games.

The youngster was Hoffenheim's player of the month in November and is making an impact both in the Bundesliga, and it seems, back at his old club Tottenham.

"The gaffer Jose (Mourinho) sends me a message now and again after games," Sessegnon says.

"When I scored he said, 'good goal carry on', a little motivational message."

He keeps in touch with a number of the players and seems pretty happy he is still on the club's group chat. He is close to Dele Alli and Steven Bergwijn and knows he can always reach out and talk to Eric Dier, describing him as "a good player and a good person".

Sessegnon is on loan at Hoffenheim until the end of the season, but he still refers to Jose Mourinho as "the gaffer" and you get the distinct impression he cannot wait to get back to the Tottenham Hotspur Stadium.

"That's the aim," he explains. "That is why I am here, to get more experience, more games in a top league and then come back and be ready to play games next year with Spurs."

Tottenham bought Sessegnon for £25m from Fulham where he made his debut in the Championship at only 16. He struggled with injury after arriving in north London and had to wait for his Tottenham debut, but two weeks later, the man who brought him to the Premier League - Mauricio Pochettino - was sacked.

Appearances were limited under Mourinho, which was tough for Sessegnon to deal with, but the 20-year-old made the decision he felt would benefit his career by making a temporary move to Germany.

So does he believe he is a Mourinho player?

"There are those people that are saying maybe not yet, but my aim is to prove people wrong," he says.

"I think I can be a Jose player, of course. It's all about learning and I will try and go back and push into the team."

He hopes he will be returning to the Premier League champions and is enjoying every moment of watching Tottenham try to dethrone Liverpool under the guidance of three-time title winner Mourinho.

"I have heard Hugo (Lloris) talking about it, the winning mentality they [Spurs] have as a group. They are really wanting to defend and sacrifice for each other, the whole mentality has changed," Sessegnon says. "They have the players and the manager. Every team the gaffer has been to, if they haven't won something in their first season then they have in the second.

"That shows a lot in my opinion. I don't want to put too much pressure on, but they have a good chance to go and win it."

He hopes it is in England, but wherever Sessegnon is playing his football next year and in the years to come, there is a fierce determination to do his talking on the pitch. And off it to try and create a fairer and more equal society.

If you see a reply to Sky Sports posts and/or content with an expression of hate on the basis of race, colour, gender, nationality, ethnicity, disability, religion, sexuality, age or class, please copy the URL to the hateful post or screengrab it and email againstonlinehate@skysports.com.