Anthony Martial is set to miss Manchester United's match against Tottenham on Wednesday due to injury.

Martial was substituted after 82 minutes of Sunday's home draw with Aston Villa and Sky Sports News understands the France forward is struggling to overcome a muscular problem.

It is believed United manager Ole Gunnar Solskjaer will once again adopt a formation featuring three centre halves, as Jose Mourinho returns to Old Trafford for the first time since he was sacked almost a year ago. 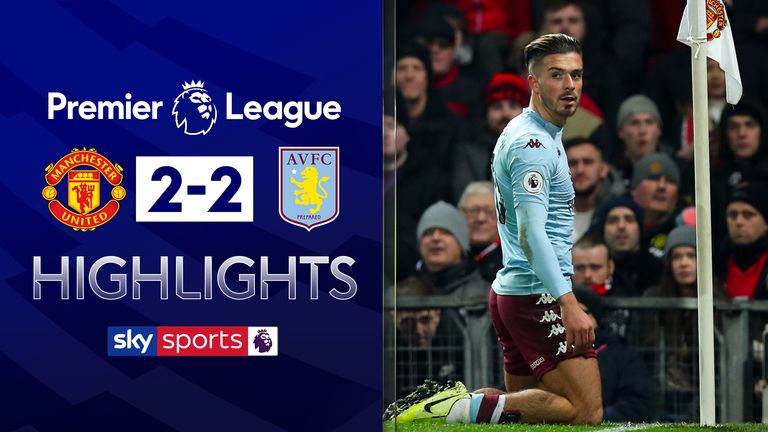 FREE TO WATCH: Highlights from Manchester United's draw against Aston Villa in the Premier League

Last month Solskjaer played a similar formation in the 3-3 draw with Sheffield United, where he started with Harry Maguire, Victor Lindelof and Phil Jones.

Scott McTominay and Nemanja Matic are "touch and go" for the game, while Paul Pogba has been ruled out.

McTominay has missed three games with an ankle complaint, while fellow midfielder Matic has not played for two months with an unspecified issue.

Pogba remains out as he recovers from an ankle injury, while Eric Bailly, Timothy Fosu-Mensah and Diogo Dalot continue to build fitness.

Solskjaer defiant ahead of Mourinho return Solskjaer hit out at speculation over his future in the run-up to Wednesday's clash, where he will go head-to-head with former United boss Jose Mourinho.

Mauricio Pochettino, Unai Emery and Quique Sanchez Flores have lost their jobs over the past two weeks and while Pochettino's shadow looms large over Solskjaer, having previously been United's top managerial target and already declaring his intention to return to work in Europe, the current Old Trafford boss was in bullish mood.

"Sometimes you laugh when you read stories about what I've said and stuff," Solskjaer said. "At least I know the sources everyone is talking about aren't sources, they are just made up, blatant lies."

"It doesn't make me more concerned, I'm just focusing on my job and doing as well as I can. I'm looking at the next game and also looking long term, planning things with the board.

"It is that time of year, it is never nice to see your colleagues lose their jobs. It's now three in a very short space of time. But it doesn't make me anymore concerned that it's December, no.

"I don't think whoever the manager or the opposition team is will change their motivation. They are motivated to do well for Manchester United because they know it is about proving it every time you step on to the pitch that you should be part of this long term."