Pogba recently said it would be "a dream" to play for Real Madrid one day; Ole Gunnar Solskjaer believes outsiders are trying to create a division at the club following reports midfielder Bruno Fernandes had lost faith in his manager

Manchester United have triggered the one-year extension clause in Paul Pogba's contract, tying the midfielder to the club until June 2022.

The 27-year-old returned to Old Trafford from Juventus in a then world-record deal in 2016 and has been the subject of regular speculation ever since.

Pogba's Old Trafford contract was due to expire next summer but United, as widely expected, have exercised their option to extend the deal by a further year. 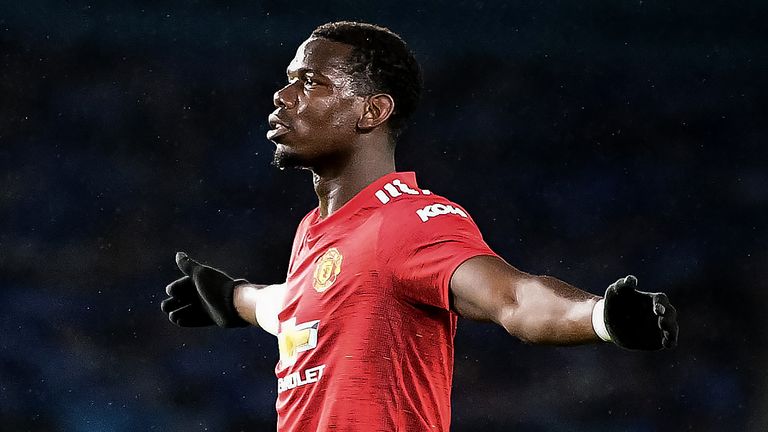 Manchester United midfielder Paul Pogba has said that to play for Real Madrid in the future would be 'a dream', but he is focused on getting his current club back to where it 'belongs'

The year's option is a feature built into the majority of contracts United agree with players when they sign, with the club having control of that clause.

The deal is believed to have been triggered before the France World Cup winner fuelled talk about his future during the international break when he spoke up the idea of playing for Real Madrid one day.

Asked about those comments in Friday's press conference previewing the trip to Newcastle, United manager Ole Gunnar Solskjaer said: "Paul's our player, he's going to be here for another two years and I'm sure Paul is focused on doing his best for us and we want to see the best of Paul.

"So, in the next couple of years I'm sure we'll get the best out of him." United boss Solskjaer believes outsiders are trying to create a division at the club following reports midfielder Bruno Fernandes had lost faith in his manager.

Reports emerged over the international break claiming Fernandes was unhappy with Solskjaer after the 6-1 home defeat to Tottenham in the Premier League.

Fernandes, though, was quick to shut down any talk of a rift between him and his manager when asked on international duty with Portugal, saying the stories were created to "destabilise" the group.

Solskjaer was pleased with the response of his midfielder, who was signed from Sporting Lisbon in January, and told him: "Welcome to Manchester United, this is what happens when you lose a couple."

"We know any little chance from outside they want to create a division. I think Bruno spoke really well the other day, saying, 'We are united and we have to stay together'.

"We can't listen to everyone outside, we've got to just get on with it."