Chelsea's Timo Werner admits he is struggling to adapt to the Premier League following his big-money summer move, but believes he will soon start firing on all cylinders.

The Germany international has scored just four goals in 13 Premier League games since his arrival from Bundesliga side RB Leipzig in a €50m (£45m) deal in June.

Werner says the price tag brings added pressure in a league he is still finding his feet in.

"It does matter how much you cost. It's always a bit of pressure when you come to a new club," Werner said. "But I think I can handle it very well. It's not something new.

"The pressure is a little bit higher than the previous years but I think good footballers are the best under pressure and that's my plan, I can do very well under pressure.

"The Premier League is a little bit different to my old league. It's tougher than I thought. The contact here is harder than in Germany, it's what I expected but not like this." 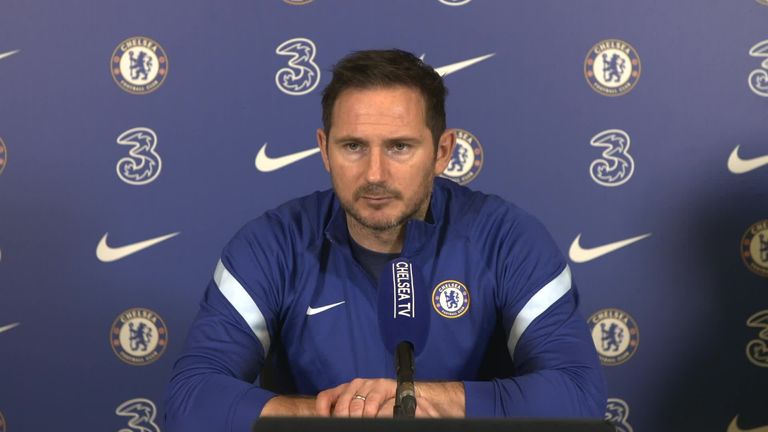 Werner, who has failed to find the net in his last eight games in all competitions, said the packed schedule had contributed to his struggles.

"The beginning was very good, but now after a lot of games I'm struggling a little," he added.

"I think it's hard when you play every three days... and on Saturday against teams that can rest the whole week.

"It makes it tough to be the best in every game but the Premier League is very fun to play in."

Chelsea, who are eighth in the table, face West Ham United on Monday, live on Sky Sports.

Frank Lampard says there are no regrets at Chelsea over the decision to release West Ham midfielder Declan Rice as a teenager.

Rice was let go from the Blues academy as a 14-year-old and moved to West Ham, where he has since become a key player and earned international honours with England.

"He's a fantastic player for West Ham and England so fair play, because his journey there after leaving Chelsea and going to West Ham is a good story to hear," he said.

"There are lots of stories like that and it shows the player's strength of character. In terms of from our end, I certainly wouldn't use the word 'regret' - our academy is one of the best in the world and you look at our first team now with the players that we have produced who are in and around that squad.

"It's not easy. It's not an exact science to pick players but the academy staff do brilliantly here. Declan Rice has given himself personal credit for having the great start to the career that he's had at West Ham."

Chelsea vs West Ham will be broadcast live on Sky Sports Premier League and Main Event from 7.45pm on Saturday; kick-off at 8pm. Sky Sports customers can watch in-game clips in the live match blog on the Sky Sports website and app. Free highlights will also be published on the Sky Sports digital platforms and the Sky Sports Football YouTube channel shortly after the final whistle.

Overall, Sky Sports will be showing at least 146 Premier League matches live throughout the 2020/21 season, continuing to bring you all the latest twists, turns and shocks at the home of the Premier League.There will also be two additional midweek programmes - one will be played across the weeks commencing January 11 and 18 and the second will be in the week commencing May 10. All of these games will be broadcast live.