"In a few positions, we don't have enough players," says Man City boss Guardiola, but adds: "I think we are not going to buy" 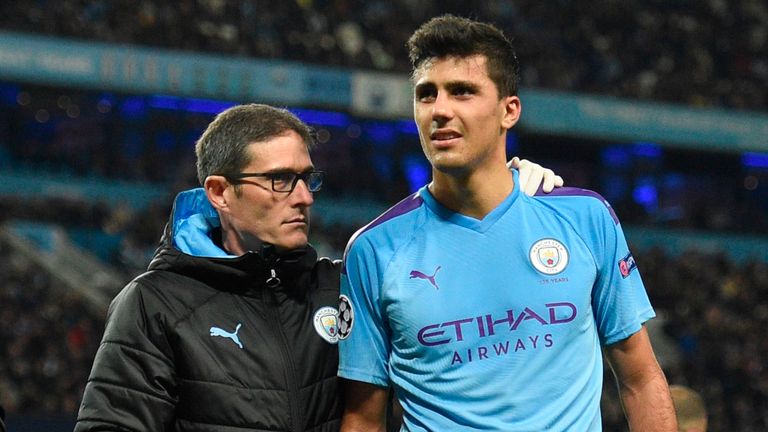 Pep Guardiola fears Manchester City's injury list could prove their undoing this season but he is not planning to strengthen the squad in January.

The Premier League champions have had a number of fitness problems already this season, with Rodri and Oleksandr Zinchenko becoming the latest casualties this week.

Midfielder Rodri is likely to be out for a month with a hamstring injury sustained in Tuesday's Champions League defeat of Atalanta. Left-back Zinchenko is facing up to six weeks on the sidelines after undergoing minor knee surgery.

John Stones is only just back in action after injury while Kevin De Bruyne, Nicolas Otamendi, Benjamin Mendy and Kyle Walker (illness) have all missed games this term.

Guardiola, whose side host Aston Villa in the lunchtime kick-off on Saturday, said: "Some are muscular, others in the past were ligaments - (there are) not many we don't have. We are in a bad period in that sense.

"When I'm thinking after the international break - November, December, January, February - yes, I'm a little bit concerned because in a few positions we don't have enough players."

Despite potential shortages, Guardiola says the club have no plans to look to add to the squad in the January transfer window.

Even though certain areas may need strengthening, City want to look long term when buying and the winter market is not seen as ideal to do business in.

Guardiola said: "I think we are not going to buy. The club didn't introduce me to the players they thought could help us, so without that, it's not going to happen.

"Our need is not just for six months, it's for a long time and the important players will not be sold. We are going to stay all the season, I think, with all the players we have right now."

In recent games, midfielders Rodri and Fernandinho have both played in defence and Guardiola expects he may have to move more players around before the end of the season.

He said: "I would prefer all the players had no injuries but I have to do it. We can't stop and complain, 'Oh what bad luck'.

"We have good players in the squad. In a few positions, there are not many but we have incredibly good players. We're going with them."