Eden Hazard out to make history at Real Madrid after unveiling

'Zinedine Zidane has been my idol since I was a child, and him being the Madrid boss was an important factor for me coming here' - Hazard 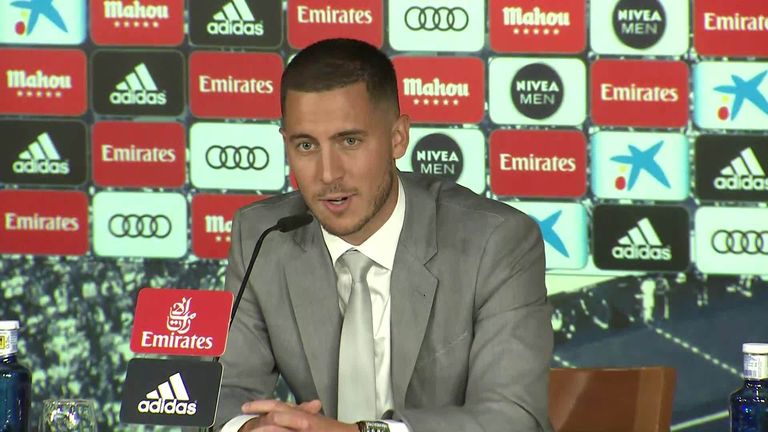 Eden Hazard has said he wants to "write another page in the history of Real Madrid" after completing his "dream" £130m move to the club.

The 28-year-old was unveiled in front of 50,000 Real fans at the Bernabeu on Thursday evening after undergoing his medical in Madrid and signing a five-year contract alongside president Florentino Perez.

The Belgium international showed of his skills to the screaming Real fans and then pledged to help restore the club to former glories following a trophyless season at home and in Europe. 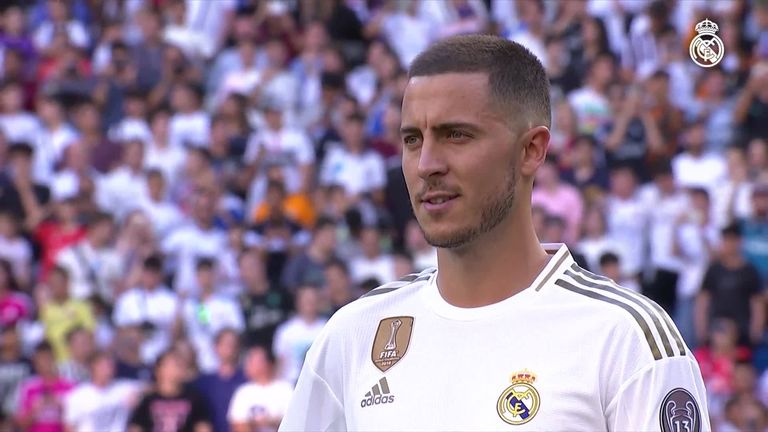 Eden Hazard was presented to the Real Madrid supporters on Thursday

After being introduced by Perez, Hazard said: "I want to win many titles with Real Madrid, in this shirt. This has been my dream since I was a child and now I'm here. I just want to enjoy this moment."

On his personal ambitions at the Bernabeu, the former Chelsea forward added: "I'm going to try to become the best player in the world, but first I wanted to be in the best team in the world.

"I plan to enjoy myself here, because at Real Madrid you have to win as much as possible.

"Hopefully I can write another page in the history of the club."

Hazard then visited his new changing rooms before donning the famous white shirt of Real and returning to the Bernabeu pitch to demonstrate his ball-juggling skills and waving to the crowd.

At his first official press conference as a Real player, Hazard revealed the presence of France great Zinedine Zidane as head coach, having returned to Madrid following a 10-month break, proved key to convincing him to join.

Hazard said: "Everyone knows Zidane has been my idol since I was a child, and him being the Madrid boss was an important factor for me coming here."