Liverpool, Manchester United, Manchester City and Tottenham are all in the Champions League quarter-final draw For the first time since the 2008/09 campaign, there will be four English clubs in the last eight of the Champions League, after Liverpool became the final team to secure their passage into the next round with an emphatic 3-1 victory over Bayern Munich on Wednesday.

With each of the other four teams all coming from different countries, the number of English clubs remaining shows the Premier League is going from "strength to strength", according to former Tottenham manager Sherwood.

"The Premier League is so strong," he told The Debate.

"Pep has come over and been to Spain and Germany and he said it straight away. He said after the first season the Premier League is the most difficult league in the world. He believes that and he's right. It's a war of attrition.

"To get to the end and consistently perform. There's always something to play for. 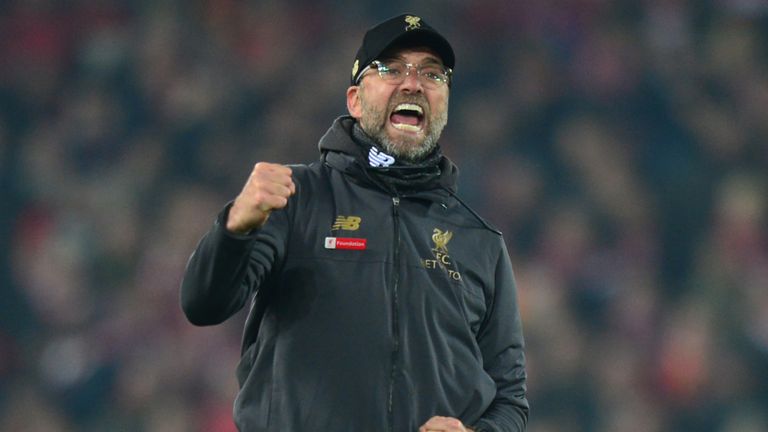 "Whether the teams are fighting for their lives at the bottom or fighting for a top-four place - there's always something. The money is over here. The players want to come to the Premier League.

"It is the biggest market, everyone wants to watch it, it's going from strength to strength. To have four teams in the Champions League quarter-finals just proves that point."

Former Liverpool defender Phil Babb feels the remarkable progress shown by the English clubs sets up intriguing plot lines in Europe and in the Premier League for the latter stage of the campaign.

"One manager needs their first bit of silverware [Mauricio Pochettino at Tottenham], another one wants to cement himself in legendary status in Ole [Gunnar Solskjaer], to not even have the job permanently but win the Champions League would be phenomenal.

"Jurgen - that expectation. Premier League plus Champions League would be huge wouldn't it.

"They've all got their own motives to win. City are doing so well. It's the one trophy that Pep Guardiola and the owners want to bring to Manchester City. He will be after that trophy."