Match report as Celtic end their Europa League campaign with a thrilling victory over Lille; Christopher Jullien, Callum McGregor and David Turnbull all on target as hosts record group-stage win at sixth attempt

David Turnbull starred for Celtic as they beat Lille 3-2 to record their first home win since September and conclude a disappointing Europa League campaign on a high.

Turnbull grabbed the winner after 75 minutes to cap an impressive performance on his first European start for Celtic, after an enthralling evening in which the good, the bad and the ugly of Neil Lennon's team were on show in equal measures.

Celtic deservedly led at half-time thanks to Christopher Jullien's header (21) and Callum McGregor's penalty (28), sandwiching an equaliser from Jonathan Ikone (24).

Former Celtic loanee Timothy Weah dragged Lille level once more (71) in the second half after yet another defensive mistake from Shane Duffy, but Turnbull's cool finish from Kris Ajer's cross ensured a first group stage win for Celtic, though they finish bottom of the table.

Man of the match: David Turnbull.

Start of the recovery for Celtic

There was little more than pride at stake for Celtic's players, but for Neil Lennon this was a chance to plant some seeds of recovery in his team's form after a horrendous run of two wins in 12 matches. With a crucial league game to come against Kilmarnock on Sunday, where a fan protest is expected pre-match, this result may placate his critics a little.

Lennon has cut an embattled figure in recent weeks amidst vociferous supporter outrage, as Celtic's performances have fallen off a cliff. Having received the public backing of the club's board twice in a week, and with his job seemingly safe at least until the New Year, the manager took the opportunity to ring the changes.

Twenty-two-year-old Northern Irish goalkeeper Conor Hazard made his debut, and there was a first start for Ivorian midfielder Ismaila Soro, who joined the club in January. The much-criticised Duffy returned in defence, while Turnbull made just his second start since signing from Motherwell.

Celtic's formation, much analysed during the recent run of poor results, raised eyebrows early on; Ajer was at right-back behind Jeremie Frimpong in right midfield, in what looked like a 4-1-4-1 system, but as the half went on the Norwegian often dropped into a back three alongside Duffy and Jullien.

There was an alarming incident early on when Frimpong clattered headfirst into the advertising boards on the touchline as he cleared, but remarkably he stood up after a minute or so appearing to be unscathed.

Lille had the first clear chance from a free kick after 17 minutes, following a foul by Jullien on former Celtic loanee Weah. Yusuf Yazici's shot dipped over the wall, but not quickly enough to cause Hazard trouble. Celtic broke upfield in numbers, and Turnbull's backheel found Patryk Klimala, but his fierce shot was beaten away by Lille goalkeeper Mike Maignan.

Moments later, Celtic took the lead. Turnbull's corner found Jullien unmarked, and his flick had enough power on it to beat Ikone at the far post. It was a positive start for a team desperately lacking in confidence, but soon after Lille were level thanks to an awful mistake from McGregor.

The captain mishit an attempted pass-back to Hazard, handing possession to Yazici who raced into the box. His cutback found Ikone arriving unmarked at the near post, who hammered it home, to make it an eighth successive game without a clean sheet for Celtic.

Goalkeeper Conor Hazard was given a surprise start for Celtic as Neil Lennon made wholesale changes to his line-up to face Lille.

The Parkhead manager rotated his squad for their final Europa League group stage game as he gave much needed game time to his fringe players. Ismaila Soro, David Turnbull and Patryk Klimala all started.

The lead was regained three minutes later, thanks to the persistence of Klimala, who showed sharpness to burgle Xeka. He then flicked it into the path of Frimpong, who had his feet swept from under him inside the box by Domagoj Bradaric in the act of shooting; it was enough to force the young Dutchman to leave the field, with Ewan Henderson replacing him.

McGregor stepped up and atoned for his earlier mistake as he drove the penalty low past Maignan - a third goal in seven breathless minutes. Neither team looked in control; both were happy to counter the other, and both defences were looking fragile.

The positive to this scenario was that Turnbull had a chance to flourish. Hardly seen since his £2.75m summer move from Fir Park, he was central to every attacking move, but took the wrong decision just before half-time when he surged upfield and chose to shoot, instead of playing Klimala in.

Lille flew at Celtic early in the second half with renewed energy, as they tried to salvage a result that would see them top the group ahead of AC Milan. Yazici's shot was deflected by a last-ditch tackle from Soro; Ikone then danced into the box, but Jullien did just enough to avert the danger. McGregor's topsy-turvy game nearly took another twist, as his attempted block of Cheikh Niasse's cross deflected the ball onto the foot of the post, but then spun out of play.

After riding out this mini storm, Celtic came forward with renewed vigour, and created a terrific chance to extend their lead. Ajer cut inside and slid a beautiful ball into Turnbull on the half-turn, who suddenly had just Maignan to beat, but his shot took a deflection and squirmed past the post. More goals looked likely - and two more followed quickly, one at each end.

Duffy, who'd looked relatively composed after his recent struggles, was booked for an innocuous challenge on Isaac Lihadji on the left touchline. He then failed to fully head away the free kick that followed, and Weah, lurking on the edge of the box, volleyed home against his former club.

Unbowed, Celtic poured forward again. Turnbull found Ajer on the right, who dodged a couple of tackles and then returned the ball into the box where Turnbull swept home his first Celtic goal, to the delight of his manager who punched the air on the touchline.

Lennon could afford to smile, after a trying series of results; the challenge for his team now is to produce results and performances like this on a consistent basis. 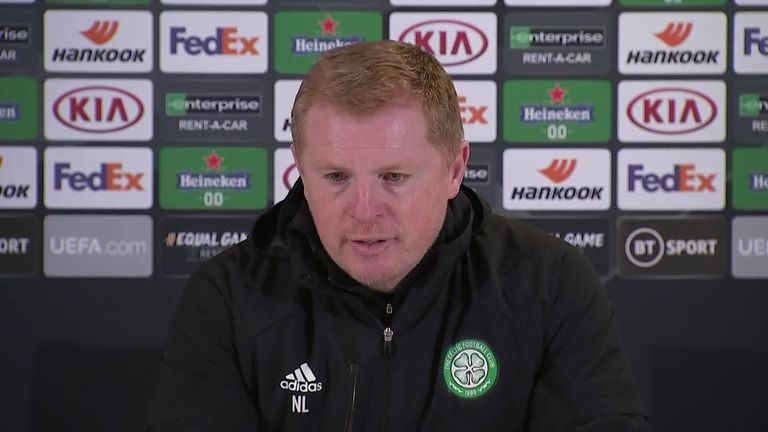 Celtic boss Neil Lennon told BT Sport: "It's a great win and a nice way to finish off a disappointing group. We probably deserved a bit better out of the group but it's a great way to finish.

"There was a lot of good energy out there and we scored three goals at home. It was a competitive game so it was well worth it. [David Turnbull] was excellent.

"He's had coronavirus which left him out for quite a while, so it has been a question of being careful with him. He did really well when he came on last Sunday and he had an exceptional game tonight. We know what a talented player he is.

"I'm delighted for the team and the squad. The result will give everyone a big lift. There's a lot of bonuses tonight. Soro, Klimala and Henderson all had fine games."

Analysis: A result for Lennon to build on

"Neil Lennon will look at the team he picked... he made six changes, and everyone wondered how they would get on. David Turnbull and Ismaila Soro will undoubtedly get more game time now. It's been a poor campaign but this was a very impressive victory and it's something for Lennon to build on.

"The only thing that will pacify supporters will be getting closer to Rangers in the Scottish Premiership. They now need to start winning league games, starting on Sunday against Kilmarnock."

Celtic host Kilmarnock in the Scottish Premiership on Sunday; kick-off 3pm. The Europa League returns in February with the round of 32.

The draw will take place at midday on Monday, December 14 in Nyon - after the Champions League last-16 draw. You will be able to follow it across Sky Sports' platforms. For all the information on the knockout stages click here.