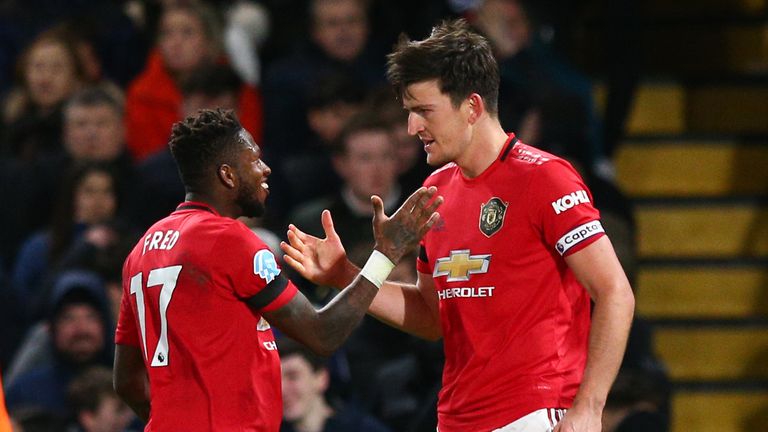 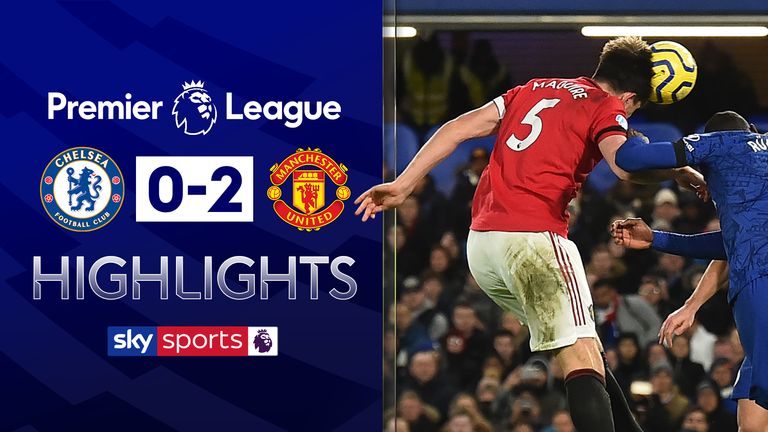 Manchester United blew the race for the top four wide open with a 2-0 win at Chelsea amid more VAR controversy at Stamford Bridge on Monday night.

Anthony Martial struck just before half-time and Harry Maguire doubled the visitors' lead on 66 minutes to send United on their way to victory, as they moved up the table to seventh - just three points behind Chelsea in fourth.

There was yet more VAR controversy in the Premier League encounter, however, and Chelsea will feel aggrieved Maguire did not see red when the game was still goalless after an incident with Michy Batshuayi, while substitute Kurt Zouma was denied an equaliser early in the second half.

More frustration was to come for Chelsea as another substitute, this time Olivier Giroud, appeared to pull a goal back after 77 minutes, but it was ruled out for a fractional offside by VAR.

How United won on a feisty night in west London

Man of the match: Aaron Wan-Bissaka

Ole Gunnar Solskjaer set United up in a 3-4-1-2 to try and stifle Chelsea and play on the counter, but it was the home side that started the brighter. Twice they went close in the first 10 minutes as Reece James and Willian hit shots just wide and over respectively from the edge of the area.

Frank Lampard's side then lost N'Golo Kante to injury but his replacement Mason Mount set up their best chance of the early proceedings as he broke into the box and squared for Batshuayi on 26 minutes, only for the Belgian striker to fire wide from a great position.

Chelsea's misses would then prove costly on the stroke of half-time as Martial put United in front with the first shot on target of the game. It was brilliant work from Aaron Wan-Bissaka to beat Willian then tee him up with a perfect cross, and the Frenchman rose in the box before nodding past the helpless Willy Caballero.

Lampard was forced into a second change at half-time as Zouma came one for Andreas Christensen, and it looked as though the replacement centre-back had levelled when he fired in from a corner on 56 minutes, but VAR intervened to adjudge that Cesar Azplicueta had pushed Brandon Williams in the build-up - even though it appeared that Azpilicueta had himself been given a little shove by Fred to push him into United's young left-back.

And 10 minutes later United would double their advantage from their own corner. Maguire - who could easily have been sent off by VAR in the first half for appearing to kick out at Batshuayi in an off-the-ball incident following a coming together in the Chelsea dugout - was given the freedom of the 18-yard box to charge in and head home a Bruno Fernandes corner.

Chelsea's third and final substitution Giroud looked to have got Chelsea back into the game on 77 minutes as he headed home Mount's cross, but the striker's foot was fractionally offside before he nodded in. There would be no way back from there as United secured their third win over Lampard's side this season.

Where does this leave the race for the top four?

The current drama surrounding Manchester City may well end with fifth place in the Premier League qualifying for the Champions League, but both sides will want to finish in the top four to ensure their spot next season.

Chelsea still occupy fourth place after Monday night's game, but the race has been blown open now, with Tottenham just a point behind in fifth, Sheffield United a point further back in sixth, and United yet another point behind in seventh.

Then comes Wolves and Everton (both 36 points) just five behind Chelsea, while Arsenal and Burnley are two points behind them. 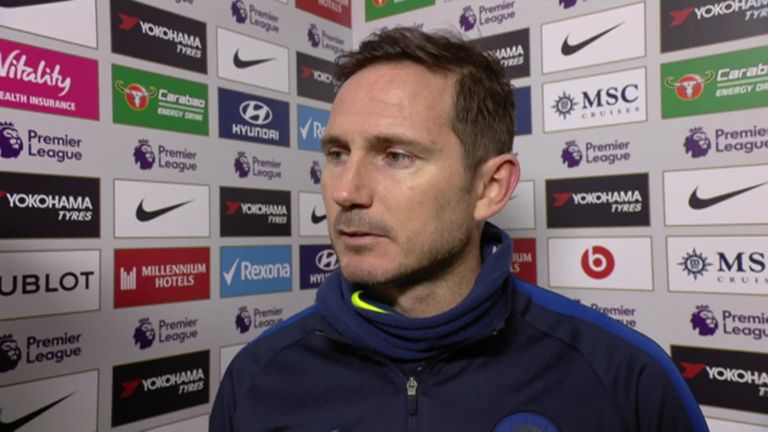 "The decisions were crucial. Maguire should get a red and he scored the second goal," said Chelsea boss Frank Lampard after the game.

"I think that's what VAR was brought in for - a second viewing and more angles. But if [the referee] doesn't look at the monitor you won't see it.

"The Zouma goal should have stood. At first I didn't because I thought it was a shove, but it certainly wasn't clear and obvious. The VAR check happens and you're trusting they make the right decision.

"But the wrong decision is harder to take with the presence of VAR than it was before. Love it or hate it, that's why it was brought in. If they see that and then don't make the right decision it's very confusing. It could just be my opinion here, but everyone I've spoken to has said the same." 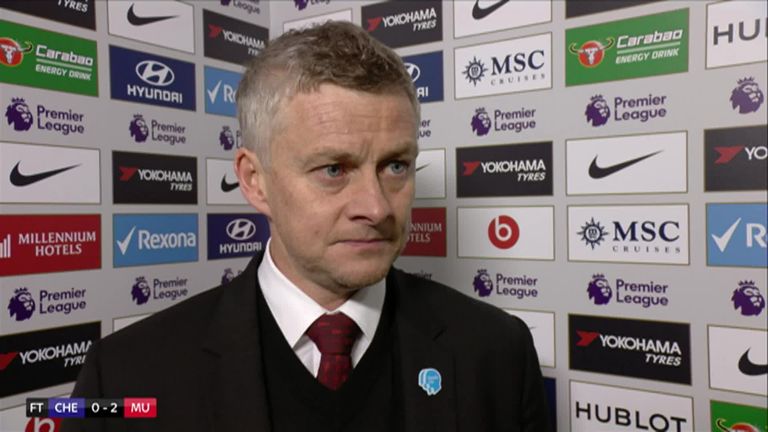 "When you win 2-0 here you're delighted," said Manchester United boss Solskjaer. "I'd take that any day of the week. But I don't think we played particularly well.

"We've got a good team with quality. We've come here and defended really well. We've kept four clean sheets on the bounce, which is a great foundation to work on, and we've found a way to play against some of these teams that has worked really well."

Gary Neville: "Manchester United have demonstrated in games away from home, whether it be Manchester City, against Chelsea or in other big games, that they're capable of winning the big games. They can get results, particularly when they get one in front. They are good on the counter-attack and they score good goals. Their problems have come against teams that sit back against them, hold their shape and stay organised.

"The result at Chelsea wasn't surprising. I genuinely thought United would do quite well at Stamford Bridge. However, I don't think United are perfect. Both teams are inconsistent. Chelsea have a tough game at home against Spurs at the weekend and they could easily go and win, while United could drop points against Watford. That's how daft both these teams have been this season.

"One of them must go on a run now to get that Champions League spot. Who finishes higher? I could swing from week-to-week. I could say Manchester United now because I feel quite confident about what they've done but I could be sat here this time next week doing Monday Night Football and United have lost and Chelsea have won, and we would be back to where we were. Neither team gives me ultimate belief and faith. I don't think you can trust either team to go on and run towards the end of the season. United can leave Stamford Bridge feeling confident but they are far from perfect."

Jamie Carragher: "This was a brilliant victory for Manchester United - and for every club fighting for that Champions League spot."

Roy Keane: "Manchester United were very good, Chelsea were poor. This was a game United had to win. I'm delighted for them and delighted for Ole.

"I never thought United were going to lose the game, although Giroud was unlucky with his goal. The key now is for United to go on some sort of run. This is a huge confidence booster for them. They scored two excellent goals."

Man of the Match - Aaron Wan-Bissaka

This award would likely be going the way of Maguire were it not for the fact he could easily have been sent off in the first half. Wan-Bissaka, meanwhile, was his usual brilliant defensive presence and showed genuine creative brilliance in his part for Martial's opening goal. If he can continue to develop the attacking side of his game he will become a serious presence as a right-back or right wing-back.

Manchester United face a quick turnaround before heading to Belgium to face Club Brugge in the first leg of their last-32 Europa League tie on Thursday night, while Chelsea meet Tottenham in the Premier League on Saturday lunchtime.