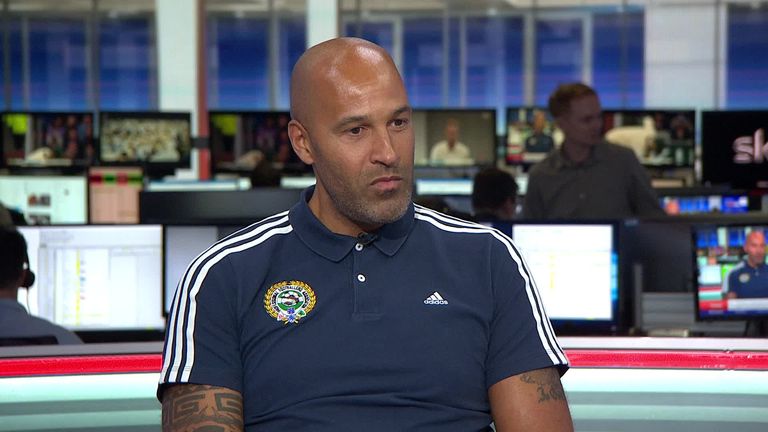 Jason Lee of the Professional Footballers' Association believes we have reached crisis point as racist abuse of players on social media continues.

Lee, who played for Nottingham Forest and Watford, welcomed the initial meetings the PFA have had with Twitter to help eradicate the online abuse of players, but feels more must be done to help solve the problem.

"We have come to a point where it is crisis as far as we are concerned," Lee told Sky Sports News.

"Everyone needs to come to the table, we need to try and thrash it out and come to some conclusion and try to eradicate what it is going on.

"To be fair to Twitter, they would have been one of the first to reach out to us and we have had two meetings with them and they were positive meetings.

"Coming from that, they have shown a real willingness to work with ourselves and improve things and also to engage with the players.

"It is important they speak to the players directly. We can all speak on behalf of players but more importantly, if there is a dialogue we have created and opened, [it can] give players the opportunity to voice their concerns to the horse's mouth."

Twitter have also released a new statement in which they confirmed that they will continue to work with the PFA and the anti-racism organisation Kick It Out to try and stop abuse of players on their platform.

"In the past two weeks, we have taken action on more than 700 examples of abuse and hateful conduct related to UK football," it read.

"This vile content has no place on our service. We will continue to take swift action on the minority that try to undermine the conversation for the majority.

We are sharing a brief update on the work we are doing to address incidences of abusive and racist behaviour towards UK footballers on the service in recent weeks.

"Working with the PFA, we will participate in their player training programme and will be joining a series of educational sessions with its membership to support the PFA's ambition to tackle the issue.

"Working with Kick It Out, we will continue our working relationship with UK policing to further brief them and provide training on our policies, procedures and dedicated 24/7 reporting channels for law enforcement.

"We want to play our part in curbing this unacceptable behaviour - both online and offline - and will continue engaging with partners and clubs, protecting the conversation from abuse, and taking rapid action on accounts that break our rules."

There have been a number of incidents where players have been racially abused on the pitch recently, with monkey chants aimed at Inter Milan striker Romelu Lukaku by Cagliari supporters.

A section of the Inter ultras group 'Curva Nord' subsequently insisted the monkey chants aimed at Lukaku by Cagliari fans were not meant to be racist.