Callum Hudson-Odoi: Bayern Munich in talks with Chelsea to sign winger on loan

Bayern boss Hansi Flick says Hudson-Odoi is "one of the best talents" in his position; Lampard admits there is no "definitive answer yet" on Hudson-Odoi's future after winger played in Chelsea's 4-0 win over Crystal Palace

Bayern Munich are in talks with Chelsea over a deal to sign Callum Hudson-Odoi on a season-long loan, according to Sky Germany, while Frank Lampard says the winger's future could be resolved on Transfer Deadline Day.

The proposed offer is a loan plus an obligation to buy Hudson-Odoi on a permanent deal in summer 2021.

Sky Germany say the England U21 international winger could seal the move by the October 5 transfer deadline, following a breakthrough in talks between the two clubs.

Hudson-Odoi played 83 minutes of Chelsea's 4-0 win over Crystal Palace on Saturday, and started for the Blues in their defeat to Tottenham on penalties in the Carabao Cup earlier this week.

After their win over Palace, Frank Lampard explained that he was unable to give a "definitive" answer on Hudson-Odoi's future, but added that the matter could be resolved on Transfer Deadline Day.

The Chelsea boss said: "I think Callum's performance, particularly in the second half when he got more aggressive, he showed ability and pace. Callum is absolutely part of our plans here."

When pressed on the player being linked with a move to Bayern, Lampard replied: "There is no definitive answer, we will know by Monday whether there is. Callum is our player, what Callum wants comes into consideration, it has to work for us."

Hudson-Odoi also scored Chelsea's second goal as Lampard's side came back from 3-0 down to draw 3-3 with West Brom on September 26.

He came through the youth ranks at Chelsea and has scored nine goals and made 11 assists in 65 appearances in all competitions for the Blues since his debut in 2018, he remains under contract at Stamford Bridge until 2024.

Bayern's interest in the highly-rated winger is longstanding. They made Hudson-Odoi a key target during the January transfer window last year when they offered Chelsea £30m for his services, and they saw a fourth bid worth around £22.5m rejected in summer 2019.

Bayern's manager Hansi Flick was questioned about the forward ahead of their Bundesliga clash with Hertha Berlin on Sunday, and confirmed that the club has shown legitimate interest in the player.

He said: "I don't know what will happen. He's one of the best talents on his position and can play as a winger and even as a striker. That's why Bayern Munich is thinking about him."

Following the arrivals of Hakim Ziyech, Timo Werner and Kai Havertz at Stamford Bridge during the summer window, competition for attacking places in Lampard's starting XI is fierce this season.

Willian has joined Arsenal on a free transfer, while Ross Barkley has signed for Aston Villa on loan for the 2020/21 campaign.

Meanwhile, Bayern, who signed Leroy Sane for £54.8m from Manchester City earlier in the summer, and are in the market for another wideman, also remain interested in Brighton full-back Tariq Lamptey. 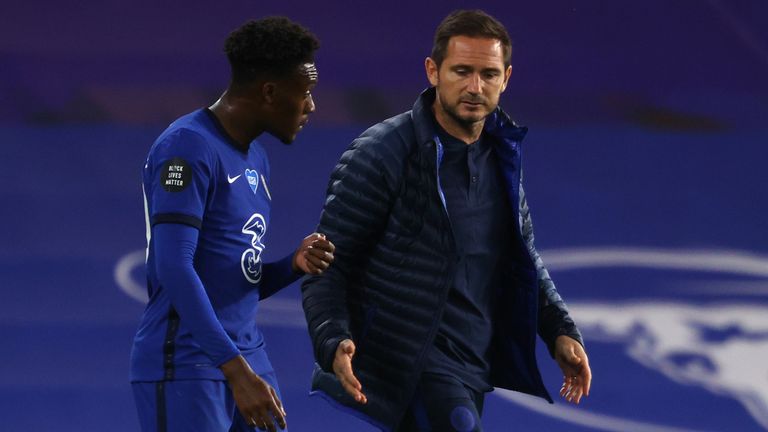 Chelsea manager Frank Lampard has admitted he would be open to allowing Ruben Loftus-Cheek, Fikayo Tomori and Callum Hudson-Odoi to leave the club on loan.

Having made a number of high-profile signings already in this transfer window, Chelsea are expected to reduce their squad size before Deadline Day on Monday, with a number of players linked with moves away.

Lampard said in Friday's press conference prior to their win over Palace that he has spoken honestly with England youngsters Hudson-Odoi, Fikayo Tomori and Ruben Loftus-Cheek about the possibility of a loan move this season.

"With every player in the squad, if it's a loan, you have to consider what's best for the player and the club," Lampard said in a press conference on Friday.

"With those three players I would always take those things into consideration.

"I have a good relationship with them all and speak honestly with them. It's one we'll approach player by player over the next few days.

"Once the window shuts, every player that is here will be used because there is a long season coming up."

Deadline Day: What do Chelsea need?

Chelsea have been the Premier League's biggest spenders so far, with Roman Abramovich overseeing an extensive - and expensive - overhaul.

Frank Lampard's attack has been transformed by the additions of Timo Werner, Kai Havertz and Hakim Ziyech, while the club have also brought in goalkeeper Edouard Mendy from Rennes, and strengthened their defence with the signings of Thiago Silva and Ben Chilwell.

Despite those defensive additions, Chelsea showed familiar frailties during their 3-3 draw with West Brom in the Premier League and could yet seek to bring in another body at centre-back and in defensive midfield. A late move for long-standing target Declan Rice should not be ruled out.

That, however, would depend on outgoings. Lampard has more than 30 first-team players at his disposal currently and he needs to trim that number. Antonio Rudiger could be on his way out, and is open to leaving the club on loan, while there are also doubts around the futures of Kepa Arrizabalaga, Emerson, Jorginho and Marcos Alonso, among others.