Fenerbahce president Ali Koc has revealed a 'dream' deal to sign Mesut Ozil from Arsenal is 'closer' than it has ever been before; watch Arsenal vs Crystal Palace on Thursday from 7.30pm on Sky Sports Premier League & Sky Sports Main Event; kick-off is 8pm 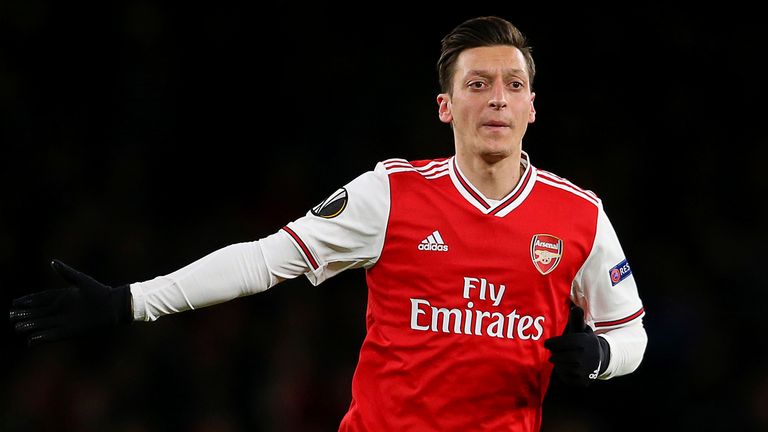 Mesut Ozil has said "if I went to Turkey, I could only go to Fenerbahce" amid speculation the Turkish Super Lig club are interested in signing the Arsenal midfielder.

The 32-year-old's representatives are currently in talks with a number of clubs, including Fenerbahce and DC United, over a move away from Arsenal, although the player's priority is to see out his current contract until the summer.

Arsenal are yet to receive any direct contact from other clubs regarding the prospect of Ozil leaving this month. The playmaker has not featured for the Gunners since March last year after being omitted from manager Mikel Arteta's Premier League and Europa League squads for the first half of this season.

During a question and answer session on Monday evening with his 25.5m Twitter followers, Ozil posted: "I grew up as a Fenerbahce fan as a kid in Germany - every German-Turkish person supports a Turkish team when they grow up in Germany.

"And mine was Fenerbahce. Fenerbahce is like Real Madrid in Spain. The biggest club in my country.

When asked whether he will continue his playing career at the end of his Arsenal deal, Ozil wrote: "There are two countries I want to play football in before I retire: Turkey and the USA.

"If I went to Turkey, I could only go to Fenerbahce."

Fenerbahce president Ali Koc also added to speculation an agreement could be on the horizon by revealing the move is "closer" than it ever has been before.

He said: "Let me make a statement about (Mesut) Ozil. I am still saying it's a dream.

"If you are aware, we as the Fenerbahce Sports Club, never made a single statement about this. What's important here is that Mesut (Ozil) can address the issues with his present club.

"We can say that this [Ozil's transfer] is a subject that we are closer to in comparison to the past. There isn't a single thing that is finished, it may end or it may not end. Therefore, these types of stories being published in the press make our hand weaker. We will see what the days ahead will show us."

During the Q&A, Ozil also ruled out re-joining his former club Schalke and joked that he would rather retire than join Arsenal's rivals Tottenham.

The midfielder has previously spoken about being frozen out at Arsenal, accusing the club of a lack of loyalty for not including him in this season's squads after he started every game since Arteta's appointment prior to the 2019/20 campaign's suspension in March due to the coronavirus pandemic.

He reiterated: "There have been many ups and downs so far, but all in all I've never regret[ted] my decision to join Arsenal. And to be honest, the last couple of games before the corona break made really a lot of fun.

"I enjoyed that time a lot and thought we [were] really on a positive way. But after the break things unfortunately changed." Arteta, who can choose to re-register Ozil to his squads after the January transfer window, wants the situation resolved, but has stated that a move away from the Emirates would only be facilitated if it is right for the club and the player.

During a press conference on Monday, the Arsenal boss said conversations were ongoing regarding the "near future and long-term future" of Ozil.

Arteta added: "When we know something we will announce it."

Earning around £350,000-a-week, Ozil is the highest-paid player in Arsenal's history and he is free to speak with other sides this month ahead of his current deal expiring in June.

The former Germany international, who was a part of Joachim Low's side which won the World Cup in 2014, joined Arsenal from Real Madrid in 2013 for a then club-record fee and has scored 44 goals in 254 matches for the Gunners in all competitions.

Meanwhile, Arteta has confirmed forward Eddie Nketiah will not be departing Arsenal this month.

Striker Folarin Balogun is also likely to see out the remaining six months of his contract and leave for free in the summer, while Genoa's chief executive Alessandro Zarbano has confirmed the club is interested in Sokratis Papastathopoulos.

Defender William Saliba has joined Nice on loan until the end of the season.

'Everything in place for Ozil to join Fenerbahce'

"It does look like there is light at the end of the tunnel as far as Mesut Ozil's move away from Arsenal is concerned.

"It looks like a deal is doable. Ozil said yesterday in his Twitter Q&A that if he were to move to Turkey, then Fenerbahce would be the only club he would go to.

"So we know Ozil likes Fenerbahce and Fenerbahce like Ozil and their president said it remains a dream to sign Ozil. So everything is in place to get the deal done.

"And you get the impression there is a willingness from all parties to get a deal done, although there is still the issue of who pays his wages for the remaining six months of his Arsenal contract...."