Steve Bruce: Newcastle manager backs himself to compete with the best amid takeover talks

Newcastle boss admits he is 'in the dark' over his future, but insists he would back himself to succeed

Steve Bruce has underlined his credentials as the right man to lead Newcastle, should the club's proposed takeover be completed.

Under Bruce's tutelage, Newcastle were 13th in the Premier League, eight points clear of the relegation zone and homing in on another season of top-flight football, when the campaign was halted due to the coronavirus pandemic.

Speaking to Sky Sports' Geoff Shreeves, the Newcastle manager said: "We all aspire in management, we all aspire to be Pep (Guardiola), Jurgen (Klopp)... these great managers who've been a breath of fresh air to football. Jurgen Klopp coming into this country, you just have to applaud him for his tactics and the way Liverpool play.

"If it's good for Newcastle, and the club are going to try to compete with these teams, to be part of it would be great. I would love to see it and I'd love to be part of it. I hope it's where it goes, but in the meantime I'll just crack on, wait, roll my sleeves up and get on with trying to get some results to try and get the club going forward.

"If that happens for Newcastle in the future, then great - I'd be delighted. You do get labelled in the game, and that's why I enjoyed my time managing in the Championship. I'd back myself against most people in that division. 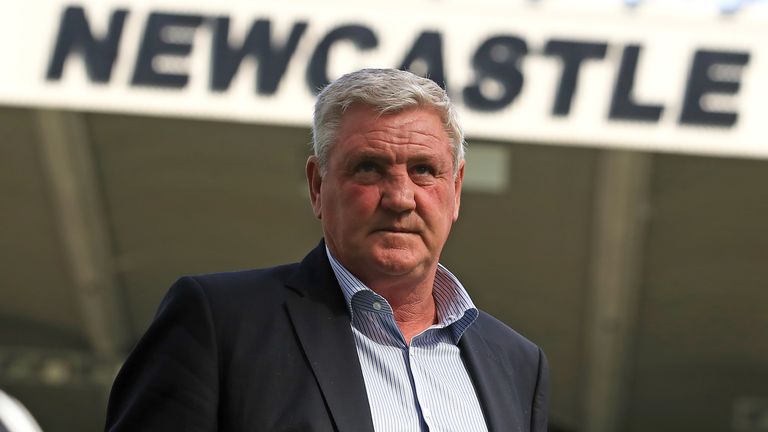 To be in a position where you're actually challenging would be wonderful. I'd back myself, of course I would.

"But to be in a position where you're actually challenging, and you have a good enough team as Newcastle did in 1995 and under Sir Bobby Robson as well, then it would be wonderful. I'd back myself, of course I would.

"Management, whether you're managing in the lower division or you're right at the top, it's about getting the best out of what you've got. And if you can do that, I'd back myself to have a crack at it. I'd be confident that I'd be able to do it.

"Whether that's ever going to be the case, who knows?"

Bruce 'in the dark' over proposed takeover

Bruce had no further update to provide on the situation, adding: "I have a wonderful working relationship with Lee Charnley and he told me, 'when there's something to tell you, Steve, I'll tell you'.

"We've left it at that and gone back to work. I'm in the dark like most other people, and for that, I'm glad, really, because I can't comment on it. It's not worth talking about it as I really don't know."

'Rose entitled to his opinion... but he must be careful'

Bruce has also been reflecting on the club's return to training this week, admitting that he, his coaching staff and the players "couldn't be more safe" with the club sticking strictly to the guidelines in place.

That did not stop Danny Rose, the full-back on loan from Tottenham, claiming Premier League footballers are being treated like "lab rats" in Project Restart while speaking this week on the Lockdown Tactics podcast.

Rose said: "I'm dying to get back to football but just with the things that are happening right now, people are going through this coronavirus pandemic a lot worse than me, I don't want to be complaining about everything.

"Just off the fact that people are suggesting we should go back to football, like we're guinea pigs or lab rats. We're going to experiment this phase and see if it works or not."

Bruce says he would respect the decision of any of his players if they were not comfortable returning to football, but offered a note of caution for the England international.

"He's got his opinions, but he's just got to be careful with them and which platforms he puts them on. If a player came to me, or a member of staff, and had their reservations, then you have to respect them."

Bruce revealed that social distancing has not been a problem at the club's training base, and he has been encouraged by the early signs of the fitness levels of his players in phase one of Project Restart.

He said: "The players have physically come back in really good condition. It's not as if they've had a break as such because we gave them a programme.

"But even with six weeks off from a usual season, you need around six weeks of pre-season with six games to get them ready for the first game.

"We know these are unprecedented times, but I still think we need at least two or three weeks of contact football to make sure they are physically ready.

"If you look at the Bundesliga at the weekend, there were eight muscle injuries. I'm sure that's down to them having only three weeks preparation."