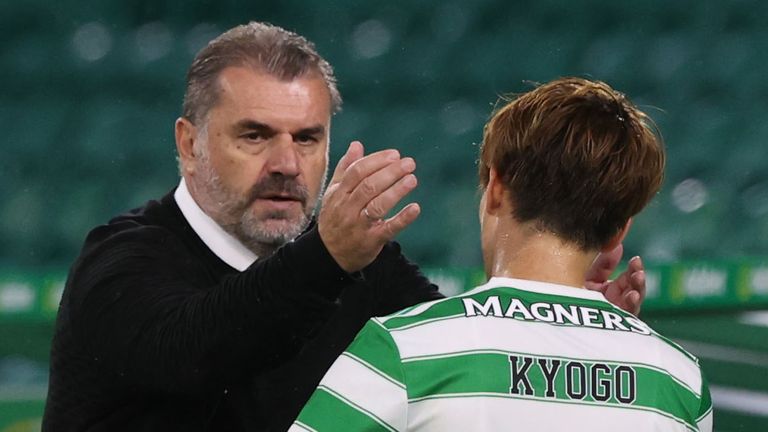 Ange Postecoglou says Kyogo Furuhashi won't let the recent racist abuse directed towards him by Rangers fans have a negative impact on his experience at Celtic.

Kyogo Furuhashi is looking forward to the Old Firm game and will not allow racist abuse directed towards him to tarnish his experience in Scottish football, says Celtic manager Ange Postecoglou.

Rangers have identified supporters responsible for chanting a racist song about Furuhashi which surfaced in footage on social media when Rangers played Ross County in Dingwall last Sunday, and the Ibrox club have issued them with indefinite bans from attending future games.

Rangers said the fans are "not representative of our club" and have prohibited the supporters' organisation from which they belong to from receiving tickets.

Celtic denounced the abuse as "disgusting" while Furuhashi, who joined the Hoops from Japanese club Vissel Kobe this summer, posted a tweet on Monday which read "I'll never walk alone", in the wake of the incident, which Police Scotland are continuing to look into.

Postecoglou told Sky Sports News: "Kyogo is good, he's a very positive young man and he understands that this kind of behaviour directed towards him is a kind of thing that a lot of people have to deal with.

"He's not going to let that tarnish his whole experience here because if you speak to him I'm sure he'd say that he's loving every bit of being part of this football club and living in this country."

Swift action has followed in light of the discriminatory chanting sung about Furuhashi and Postecoglou believes the reaction from the two Glasgow clubs and the wider football community has been appropriate.

He added: "It's what should happen, I said it that it's not about education. If you do something wrong, just deal with it and deal with the person involved, make it clear that it is unacceptable.

"Make it clear that as a sport, as a club, as a nation it's not acceptable and put it where it belongs.

"Just move on with life and make sure that people understand that we're not going to spend time debating these things, people know.

"Don't do the wrong thing and treat people with the same respect that you'd like to be treated with.

"We can't be sidelined into long conversations about these things anymore. And I say that as someone who is not currently in that position, maybe because of my standing in life and the fact I speak English, people have treated me okay, but I just don't think that we need to spend too much time delving into the 'whys' of this.

"Deal with it, the clubs involved have done that, the industry has done that and everyone has condemned it. Let's go."

Furuhashi, 26, scored a hat-trick against Dundee on his home debut earlier in August and has begun the season in prolific fashion with six goals in seven games in all competitions for the Hoops.

When asked whether Postecoglou has any reservations about playing him against Rangers on Sunday, live on Sky Sports, he said: "No, as shocking and as disturbing as it is, people just should know better. You're not going to live your life reacting to people who should know better, you can't fall into that trap.

"He hasn't changed at all, he's still very happy and very bubbly and looking forward to the game and something like this isn't going to affect him.

"Because I can tell you if you feel the stadium with people who wish him well and respect him for what side they support, will appreciate the talent he has."