England's captain suffered a knock to his right ankle in the second half of the 6-2 win over Iran, but Southgate says he is "good for the game" against the USA; The Spurs striker was a key figure in the crushing win and claimed two assists 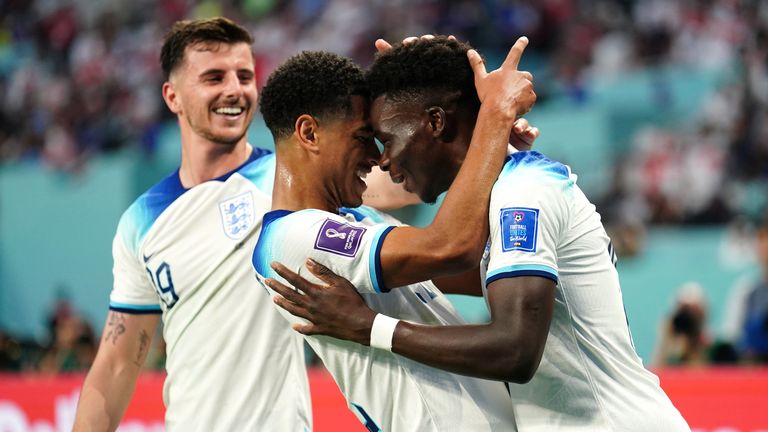 England manager Gareth Southgate has confirmed captain Harry Kane will be available for Friday's World Cup clash with the USA.

England's captain suffered a knock to his right ankle in the second half of Monday's 6-2 win over Iran and played on for 25 minutes before being substituted after 76 minutes and underwent a scan to determine the severity of the injury.

Sky Sports News has been told Southgate is expected to name an unchanged starting line-up from the 6-2 win against Iran for tomorrow's World Cup match Group B clash against USA.

In in his pre-match press conference ahead of the USA clash, Southgate said: "Harry is good. It would be a brave decision to leave him out of the starting line-up!"

Following his early departure in England's game against Iran, Jordan Pickford tells the media that Harry Kane is back out on the grass with his teammates

The update followed on from Jordan Pickford's admission that Kane had trained with the rest of the squad on Wednesday. I think he is good, probably a bit sore but he's out on the grass today with us. He's fine, yeah," the goalkeeper said.

Maguire to start against USA

Harry Maguire will start for England against USA tomorrow, and is set to win his 50th cap.

A controversial selection for the starting XI in England's opening-day win against Iran, Maguire put in one of his most assured performances of the season. He hit the bar with a header early on and then earned an assist for Bukayo Saka's first goal.

There were concerns about Maguire's fitness for the second Group B game after he was forced off against Iran through illness. But he has now recovered and taken a full part in England training.

"I was disappointed to come off [against Iran]," said Maguire. "I felt unwell in the second half and we have done all the appropriate actions and I have trained for two days and I feel good. I am ready to go for tomorrow.

"My 50th cap will be a really proud moment for myself. I've had some unbelievable memories. Every time I put the shirt on, it's such a proud moment.

"Scoring in the quarter-final of the World Cup and the Euros, reaching a semi-final, reaching a final: there have been many memories.

"There are still a lot of players who were there in my debut and are still there now. I've played a lot of games with John Stones, he's been there in pretty much every game I've been in."

Southgate: We won't appreciate Stones and Maguire until they're gone

Southgate has jumped to the defence of Maguire, who has been criticised over his form after losing his place in the Manchester United starting line-up.

The England manager paid particular tribute to Maguire's centre-back partnership with Stones, with the defensive duo acting as mainstays in his team throughout his tenure.

"We wanted to build our team of having the capability of playing out from the back," said Southgate. "Harry and John Stones have provided that incredible platform to build on.

"We won't appreciate that stability in possession until they're not there. And they can defend well. They know each other's games and they fight for each other. They take pride in keeping clean sheets but they need to liven up!

"Harry's 50th cap is well deserved. He has played a big role in two big tournament performances and we hope it's a third."

Speaking about that criticism, Maguire added: "As a footballer, nobody likes being criticised but it's part of the game. Cristiano [Ronaldo] is the best player who has ever kicked a football and he gets criticised day in day out. England defender Harry Maguire says he has great belief in his ability and wants to fight for his place at his club Manchester United, adding that criticism is part of the game

"He gets criticised daily so it will happen to all of us. We have to go to training do your best and that's all you can do."

Earlier this week, goalkeeper Pickford gave his vote of confidence to Maguire. "He needs to be respected a lot more but every footballer gets criticised. I think it's a bit unfair. His performances on the pitch have shown how good he is.

"He has been unbelievable. He was really good the other night, got an assist and maybe could have got us a penalty with that VAR decision that went against us.

"I have a great relationship with him. The majority of my camps have had Harry in front of me and he's in a very good place now. "

Souness: Kane needed saving from himself

"I'm watching England with a manager's head on and when I see the challenge, I'm thinking, 'this boy's got a history with his ankles'.

"He stayed down a bit, he wasn't right, he was walking gingerly on it. I'm thinking, 'he has to come off now'. That happened in the 48th minute and he went off in the 75th. He had 27 minutes running on that ankle.

"Some players need saving from themselves. He's a goalscorer. He's thinking, 'there are goals in this game against Iran and I'm going to stay on'. I think that's a mistake.

"I think the manager should have had him off immediately, You're three-nil up at that point as well. You don't need to risk Harry any more.

"I've written about this competition prior to coming here and I think England could do really, really well, as long as Harry scores lots of goals. I'm not sure when they are playing proper teams, who else is going to get goals.

"So I see that as something that was avoidable, and that, for me, is down to the manager, because a player who wants to be top scorer in this competition will act in a selfish way in that situation. He needs saving from himself there.