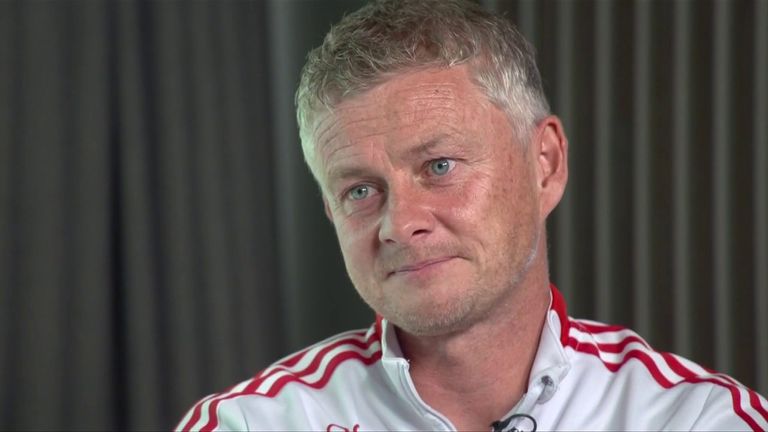 Manchester United manager Ole Gunnar Solskjaer says new signing Raphael Varane has the credentials to take the club to the next level and help bring major trophies to Old Trafford.

The France centre-back received a magnificent ovation as he was unveiled in front of the fans prior to United's 5-1 opening Premier League win against Leeds, and Solskjaer says he could make his debut at Southampton, live on Sky Sports.

Solskjaer admitted he has been impressed with the former Real Madrid star since his arrival and his experience could play a pivotal role in helping the side win silverware.

"He certainly has all the credentials and quality to do that," Solskjaer told Sky Sports. "He's impressed me since he's come here.

"He wants to learn about our style of play. He works hard, he wants to get his fitness up.

"It's been a while since he played in the Euros. He's very meticulous, he's such a top professional.

"You can see his honours, his trophies - but you also look at him and what he's done off the pitch.

"There's not a lot of trouble there, so for a manager I'm very impressed by him."

The Norwegian says both Varane and United's other marquee summer signing Jadon Sancho could start when they make the trip to St. Mary's, with the duo having now had time to build up their match fitness with their new team-mates.

When asked if the pair are fit enough to feature from the start, Solskjaer said: "Yeah, I would think so.

"Of course, I was worried before Leeds with the lack of minutes a few had but we managed to get through on adrenaline.

"The first couple of games you play in a season you get through by adrenaline no matter how many games you have played in pre-season.

"The clue is to be consistent. Not to have all the adrenaline in the first one or two. So we need a foundation.

Sancho came off the bench to make his debut against Leeds following his £73m move from Borussia Dortmund.

Solskjaer believes the England forward is a perfect fit for his side and says he has settled in quickly since making his return to Manchester.

The United boss said: "For me, he fits us like a glove. He's creative, he's fearless.

"He's got quality, he's hardworking, humble. He's got all the attributes to be a success at Man United.

"He's very young. Sometimes you think wow - all the experience he has on his young shoulders. He'll only get better."