Who have Arsenal been linked with this summer? The latest rumours...

The latest on the players Arsenal have been linked with this summer - and who might leave the club as the Unai Emery revolution continues...

"Our idea is to continue to carry on and improve with the young players that have arrived," Emery said after the Gunners' Europa League final defeat. "Maybe some players need to leave but it's not the moment to speak about that."

Arsenal's summer transfer budget halved in size due to their failure to qualify for the Champions League, according to this week's Transfer Talk podcast. 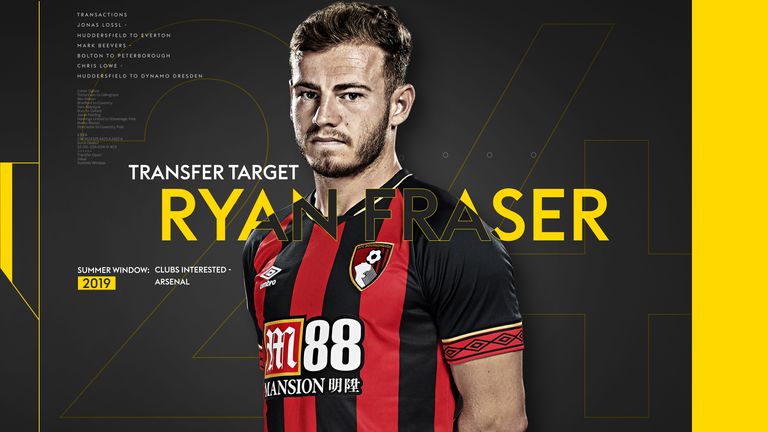 The latest players Arsenal have been linked with...

William Saliba - Tottenham are in talks with Saint-Etienne over the signing of defender William Saliba, according to Sky sources. However, Arsenal are close to completing a deal that would see Saliba return to Saint-Etienne on loan next season, meaning it could be the player's choice if both offers are accepted. (July 12)

Sky Sports News reported this week Arsenal were set to secure a £27m deal with the Ligue 1 side which would see the promising 18-year-old loaned straight back next season. (July 8)

Dani Ceballos - Arsenal are interested in signing the Real Madrid midfielder on loan, according to Sky sources. The Gunners' north London rivals Tottenham are also in talks with Madrid over a potential transfer for the Spain international. (July 11) 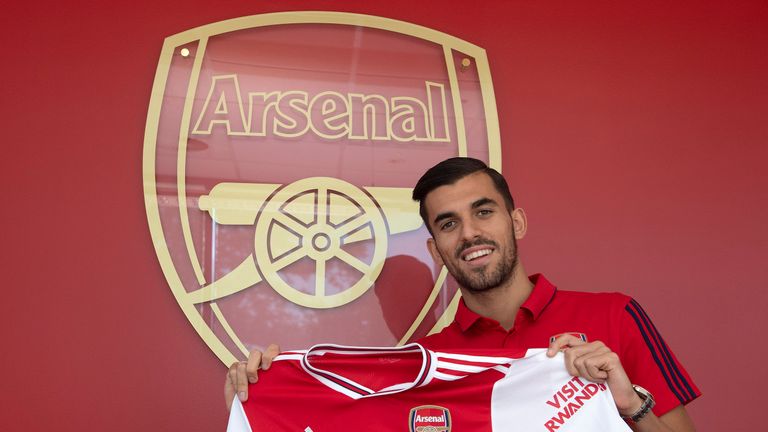 Ryan Fraser - Bournemouth chief executive Neill Blake insists a new contract offer remains on the table for the Scotland forward (June 15). Fraser's future looks uncertain this summer with only 12 months remaining on his current deal, and he has been linked with a move to Arsenal.

Ivan Perisic - The Croatian will be allowed to leave Inter this summer for a fee of around £35m. There has previously been interest in Perisic from Manchester United and Arsenal, but as yet no bid has been submitted by a Premier League club. (Sport Italia, June 14)

Yannick Carrasco - Arsenal are reportedly 'one step away' from completing their first deal of the summer with Carrasco closing in on a move to the Emirates (Daily Star, June 8). The Belgium winger has expressed his desire to leave Chinese Super League club Dalian Yifang and return to one of Europe's top clubs.

Dennis Praet and Joachim Andersen - Arsenal have been told they must pay at least £44m for Sampdoria pair Dennis Praet and Joachim Andersen (Daily Star, June 8). The Gunners reportedly launched a double £37m bid for the Sampdoria duo last week (Daily Star, June 4); But Arsenal's raid for the Sampdoria duo has been rejected, with the Serie A club requesting £50m (The Sun, June 11)

Djene Dakonam - The Gunners are also competing with Everton for the signature of defender Djene Dakonam (Marca, June 8), but look as though they could lose out to the Toffees (Daily Mirror, June 11).

Nicolas Pepe - The Lille winger is set to snub interest from several Premier League heavyweights and sign for Bayern Munich. Liverpool, Arsenal and Manchester United were all credited with interest in the 24-year-old (The Sun, June 8)

Fedor Chalov - Arsenal are one of a number of top clubs monitoring the young Russian striker, Sky Sports News understands.

Thomas Meunier - The right-back is expected to be sold by PSG this summer and 'Arsenal are ready to challenge' Manchester United for his signature (France Football, May 28). The Daily Express have reported the Gunners are in advanced talks to sign Meunier on a five-year deal (May 31). Arsenal are being challenged for his signing by Manchester United, who are ready to mount a €20-30m bid (June 1). Arsenal manager Unai Emery has made personal contact with Meunier in an attempt to convince him to join the Gunners ahead of Manchester United. (Mirror, June 2). However, despite the Gunners having held talks over a £20m move for the Belgian, they fear it could fall through due to their failure to qualify for the Champions League (Mail, June 4)

The latest on those who could leave Arsenal this summer...

Laurent Koscielny - Arsenal are set to open disciplinary proceedings against the Frenchman after he refused to join the club on their pre-season tour of the USA, according to Sky sources.

Arsenal will demand £10.6m for captain Koscielny as Borussia Dortmund step up their interest (Daily Mirror, June 14; Star, June 15); The Arsenal captain is out of contract next summer and 'could be sold' this summer if he doesn't sign a new deal (The Sun, May 21).

Mesut Ozil - Arsenal are stepping up their efforts to sell the Germany midfielder (Sun, June 15). However, Ozil could outlast manager Unai Emery at the Emirates, Raphael Honigstein told the Transfer Talk podcast.

Granit Xhaka - Atletico Madrid will launch a move for Arsenal midfielder if they are unable to strike a deal with Real Madrid for Marcos Llorente (AS and the Sun, June 19).

Callum Chambers - The Gunners are also expected to entertain offers for Calum Chambers, following an impressive loan spell at Fulham and the defender could be of interest to some Premier League clubs (Football.London, June 8)

Shkodran Mustafi - The German defender has reportedly been made available for transfer with AC Milan believed to be interested (Football.London, June 7)

Sead Kolasinac - The full-back is reported to be of interest to Barcelona as a back-up player (The Sun and Daily Express, June 5).

Pierre Emerick Aubameyang and Alexandre Lacazette - Arsenal will offer the duo over £200k-a-week each over fears their in-demand strikers might leave. (Sun, June 15)