What now for Mario Balotelli? Italian striker's brief time at Brescia almost over but his next move is uncertain

Mario Balotelli's return to Brescia in the summer of 2019 was supposed to be special. "Finally, I return to my city," the much-travelled striker posted on his Instagram page after signing a three-year deal with his hometown club.

Following inconsistent, frustrating spells with Inter Milan, Manchester City, AC Milan, Liverpool, Nice and Marseille, Balotelli was going back to the town where it all began, to join a team on the rise, a club where he would be loved, and with the ambition of recapturing his best form.

He revealed his mother cried when he told her he was going to play for Brescia, and spoke about how it would have been a dream come true for his late father to know he was playing in the club's blue and white.

But less than 12 months on, the fairy-tale story has twisted into a nightmarish scenario for both Balotelli and the Serie A side. Brescia has been added to the long list of clubs where, once again for the enigmatic frontman, it just didn't work out. Why always him? 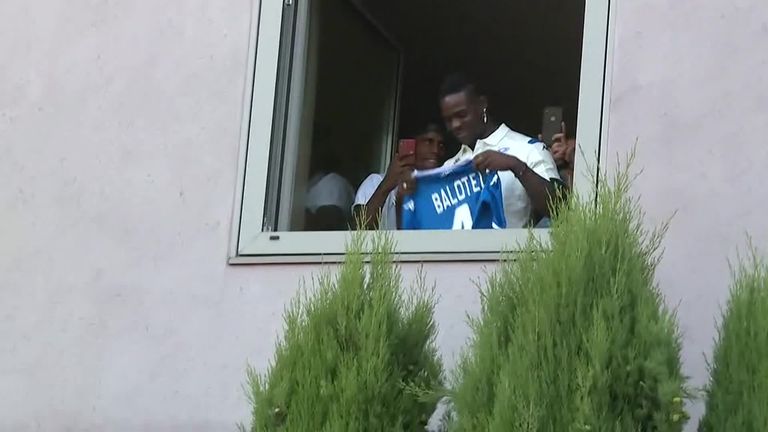 "I thought that playing in his city he could give a lot. He had a lot to give but he had to do more, much more," Brescia head coach Diego Lopez told Italian newspaper Corriere della Sera last week, with Balotelli's contract set to be terminated.

Balotelli's commitment has been questioned, with the club critical of failed physical tests and missed training sessions, while just five goals from 19 league appearances is a disappointing return.

Balotelli has once again been the target of racist chanting, by supporters from both Verona and Lazio - a problem he encountered when he first started out as a pro in Italy with Inter Milan.

At 29, he was supposed to come in and inspire his young team-mates, many of whom are playing their first season in Serie A after winning Serie B in 2018/19. Instead, his poor performances have contributed to Brescia being rooted to the bottom of the table and facing relegation.

A bust-up with club president and former Leeds United owner Massimo Cellino - who has been repeatedly vocal about Balotelli underachieving this season - seems set to spell the end.

"It's a surreal situation because Cellino thought that the player in his hometown would change his way of being and become a responsible, decisive player," says Sky in Italy's Marina Presello. "This was not the case."

As far back as March, Balotelli was offered consensual termination of his contract but the player rejected the proposal.

Now, after being forced to train alone, missing two training sessions without justification - according to Brescia - and then failing to meet the required standards in a fitness test last week, Cellino has instructed his lawyer to terminate Balotelli's contract.

Balotelli has provided a medical certificate showing he missed the two training sessions because of gastroenteritis and attempted to return to training on Tuesday. Brescia hadn't been expecting him and sent him home but he could be back on the training field on Wednesday.

However, whatever comes next - and any potential dismissal would have to be seen by an arbitration panel - Balotelli's future looks set to be somewhere else.

The group took one path and he took another. He is not at the level of his companions.

Brendan Rodgers has spoken of how he "struggled to connect" with Balotelli when he was manager of Liverpool, and that if Balotelli could marry his talent with intensity he would be "one of the best players in the world".

That perception of a missing drive or desire was echoed by Italy coach Roberto Mancini in April. "He has to give more; at Brescia he hasn't done a lot and he knows it," said the former Manchester City boss, who had an infamous bust-up with the striker on the training pitch. Watch all 20 of Balotelli's Premier League goals for Manchester City

The attitude and application of the Premier League winner clearly frustrates his current coach, Lopez, too. He has revealed Balotelli's commitment to maintaining his fitness during lockdown didn't match that of his team-mates.

"I believe that everyone is master of his own destiny but not in words. With gestures," he said. "Mario trains on his own because his team-mates have made a journey that he hasn't done. It was optional, OK, but the group took one path and he took another.

"During the quarantine, he did not show up on Zoom. Although he says he is fine, he is not at the level of his companions. He has to recover, period."

Those examples reflect Balotelli's performances on the pitch this season.

Brescia are nine points from safety with 12 games remaining and, despite Cellino appointing three different managers in the space of the season, they have struggled with the step up in leagues, paying for not strengthening their squad further last summer.

Clearly a team battling at the bottom of the table, with so many managerial changes is not an ideal environment for a player like Balotelli to thrive in.

But Balotelli's failure to take on the talismanic role he was signed for has been a real frustration at the club. Cellino even suggested he could leave on a free transfer in January.

"Balotelli, in his role as striker, takes away energy from the rest of the team," says Presello. "He doesn't come back and defend and everyone has to play for him."

Balotelli hasn't scored the goals to warrant such an approach.

A long-term injury to fellow striker Ernesto Torregrossa has limited the alternatives for Lopez and Brescia but, regardless of their situation, president Cellino has decided he has seen enough and his club can do without this star name.

The inevitable question is - where next for Balotelli now? Clubs in England, France and Italy have all seen first hand the maddening mix of magic and disruption he brings with him. Would teams in those divisions be prepared to gamble on him delivering the consistency which he has rarely shown so far in his career?

Prior to his switch to Brescia, there was talk of a move to Flamengo in Brazil, while more recently fellow Brazilian side Vasco da Gama have been linked as a potential destination, as well as Galatasaray in Turkey or the MLS.

Perhaps there will be another shot in a big league. But whatever his next move, Balotelli's brief time back in Brescia feels like a frustratingly familiar story for the forward.