Partizan Belgrade vs Manchester United, Arsenal vs Vitoria and more...

Charlie Nicholas returns with his latest round of Europa League predictions with Manchester United, Arsenal and Celtic all in action.

This is another difficult game for Manchester United. It was a Jose Mourinho-style performance against Liverpool. I can never remember Manchester United, even when I have seen them on the back foot and having poor times, seeing them knock 50-60 yards to get five or six seconds breathing space. United nearly won ugly.

Anthony Martial is fit and I think he will start, while Marcus Rashford started, scored and played well against Liverpool. Ole Gunnar Solskjaer will want to go to a back four, but their midfield cannot keep the ball. Scott McTominay and Fred are grafting but they cannot pass the ball. It is another awkward night for Manchester United, but 1-1 would be a decent result for them and that is saying something.

It is a difficult one to call. I watched Wolves at the weekend and they were pretty ordinary. It was their 18th game and there is another one on Thursday, Nuno Espirito Santo said. This is what the clubs have to do if they want to get into Europe.

He does not like changing the team very often and does not have the biggest group, but Wolves can go a long way and they will fancy their chances. They might have beat Man City but they struggle with the lesser teams. It will be interesting to see how this one shapes up.

Rangers are going well. They are scoring lots of goals, but are a bit frail defensively. James Tavernier is a bit weak defensively compared to what he is going forward. That does create its own problems. Rangers do not have the craft or knowledge to get through these games when they do not see a lot of the ball, so this is where they may come unstuck.

It should be another night where Arsenal can make some changes. We need to see whether Hector Bellerin and Kieran Tierney will be back and I would hope that Emile Smith-Rowe could come in, as well as Joe Willock and Reiss Nelson.

Will he throw Mesut Ozil into this situation? I think Unai Emery knows Ozil is not training hard enough, so that is why he is not putting him in the team. He is still there so I would play him.

Alexandre Lacazette could make a return on Thursday and you could play Bukayo Saka down the middle and rest Pierre-Emerick Aubameyang. If Rob Holding is fit, he should come in and play. It will be six or seven changes but I expect Arsenal to get the job done. 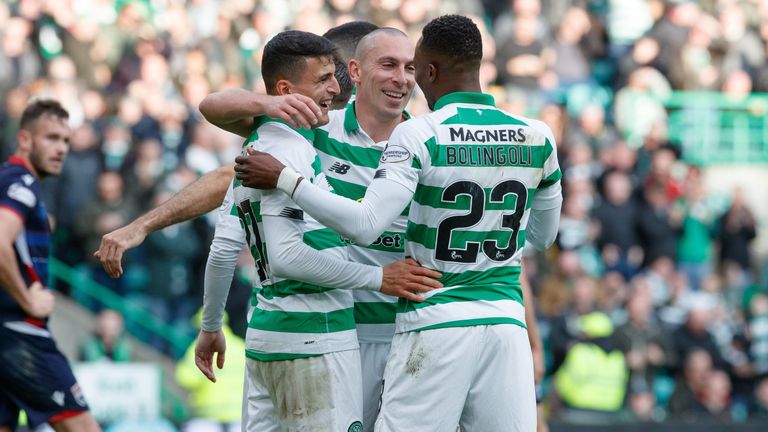 Highlights of the Scottish Premiership match between Celtic and Ross County

It is a cracking game. Lazio are not one of the top names in terms of the Italian teams now and Celtic Park relishes these on European nights. Lazio are seventh in the Serie A but are tough defensively.

Odsonne Edouard enjoys these types of games, so he will want to play well and show his credentials. Lazio are well organised and are great on the counter-attack. The crowd are something else on these nights so I think Celtic could just nick it.