At a time when football grounds have closed their doors, we've asked Martin Tyler to share some of his favourite facts and memories of the homes of clubs around the world.

This week, Sky Sports' Voice of Football is looking at the top five clubs in the Sky Bet Championship and takes us on a virtual visit to Nottingham Forest's City Ground.

Keep an eye on The Football Show on Sky Sports News and @SkySportsPL for some special Tyler's Teasers from Martin. 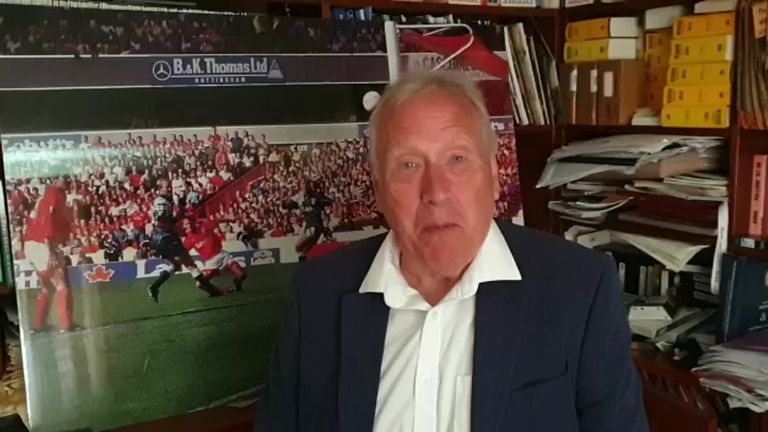 Martin Tyler takes us all the way back to 1992 for his teaser on Nottingham Forest. Will you rise to the challenge? Scroll down for the answer.

How I get there

By car. From London the M1, coming off south of Nottingham, with the Ratcliffe-on Soar power stations a distinctive landmark. Closer to the City Ground you also pass Trent Bridge, one of the premier cricket grounds in the country.

It has been a while, but the position is excellent. In the Brian Clough era it was always special to be given a Nottingham Forest game. The match was usually rich in entertainment and the after-match interview with the manager even richer!

The City Ground is only 400 yards from the home of Notts County, but there is the river Trent in between. Elliptical goalposts, commonplace these days, were first used at the City Ground in 1921.

My memories of the ground

This, of course, was the venue for the first Premier League game to be televised live, a momentous day for Sky Sports and all of us who were privileged to be part of the team.

We went on air two hours before kick-off so in fact the build-up was longer than the match! Nottingham Forest were managed by the still-charismatic Brian Clough with a side which included his son Nigel against Liverpool under the control of Graeme Souness, fully recovered from the health issues which had blighted his previous season.

The game produced just one goal for our small audience at the time but it was in my words "a peach", struck by Teddy Sheringham, or Edward as he was constantly called by his boss.

It was a sharp shot which zipped past Liverpool's new goalkeeper David James who was making the first of his 572 Premier League appearances. The scorer might have known at the final whistle that it was to be his final goal for Forest, though it was not reflected in the broadcast.

Within days Teddy was off to Tottenham where he contributed 21 more to finish the leading scorer in that inaugural campaign.

The Premier League Live was underway and Sky Sports had made it happen. When we drove home from the City Ground that Sunday evening did we anticipate what the next 28 years would bring? Definitely not!

Nor could we have foretold what would happen over the next nine months to the two clubs.

Forest won only nine more matches in their 42-game fixture programme and were relegated, bottom of the table. For Brian Clough a season that had started with this famous win was his last at the club where he had achieved such tremendous success during more than 18 years in the job.

Liverpool ended sixth, also below expectations for the serial winners of the Football League in the seventies and eighties, and were given a very early warning of just how competitive the Premier League would become.

When I approach the City Ground my feelings are unlike arriving at any other stadium. I wonder and maybe even worry about the Nottingham weather. It all stems from attending evening FA Cup ties at Forest.

In January of 1991, I was ready to commentate on a third-round replay against Crystal Palace on five separate occasions. The first three were all called off for three different weather problems. I am not sure of the order but the postponements were caused by fog, frost and heavy rain.

The fourth finished as a draw and, as was the case in those days, there was a toss of a coin for the venue for another replay and back to the City Ground we trooped again.

Eventually, Forest won through and went on to reach the final!

Five years later a fifth-round tie we were covering against Spurs started in perfect weather and was abandoned after just 15 minutes because of a blizzard.

You just never know in Nottingham! 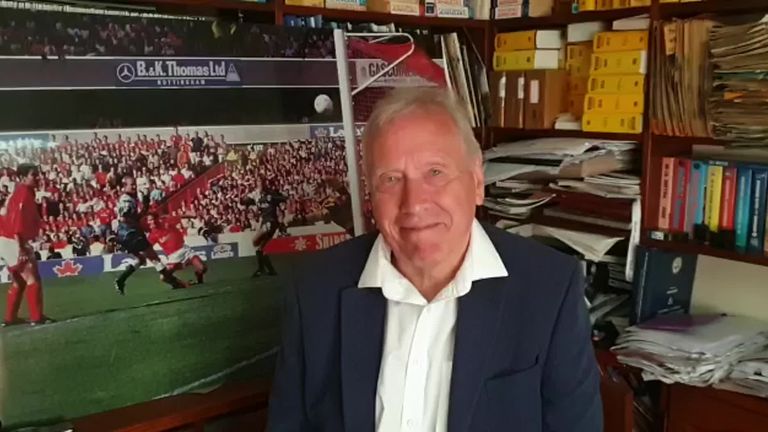 Martin Tyler gives you the answer to the Nottingham Forest teaser. Did you get all eight players?

On Monday: Martin brings you his guide to Arsenal's former ground, Highbury